We tend to go hiking as a couple, mostly because we’re amateurs and don’t want to embarrass ourselves and hold back our friends who are extremely proficient.

Lately we’ve been doing more hikes and getting in better shape so when our friends recently asked if we wanted to go hiking together, we finally said yes!

We decided to tackle Rattlesnake Ledge, which they had done before, but add on the East Peak extension, which was new for all of us.

The extension added a fair amount of mileage and ascent, which we thought they would appreciate. It was an exciting challenge for us and ended up being our longest hike yet!

We met at the Rattlesnake Ledge trailhead at 8 a.m. and set out in the rain. Once we were under heavier tree cover the rain wasn’t as much of an issue and overall the trail was fairly clear and in good condition. There was a ton of water on the trail to navigate, however, and I was thankful for my waterproof hiking shoes.

The Rattlesnake Ledge portion of our hike didn’t take long and there were a few groups of people near the ledge when we arrived. It wasn’t as busy as I expected, likely due to the rain, which by this point had turned to a wintery mix that was beginning to stick to the ground and trees. The ledge was a little slick but we carefully climbed over the rocks to take a few pictures.

I was a little disappointed the low clouds blocked our views over the surrounding area, but now we have an incentive for coming back to complete this portion of the hike again on a clear day! 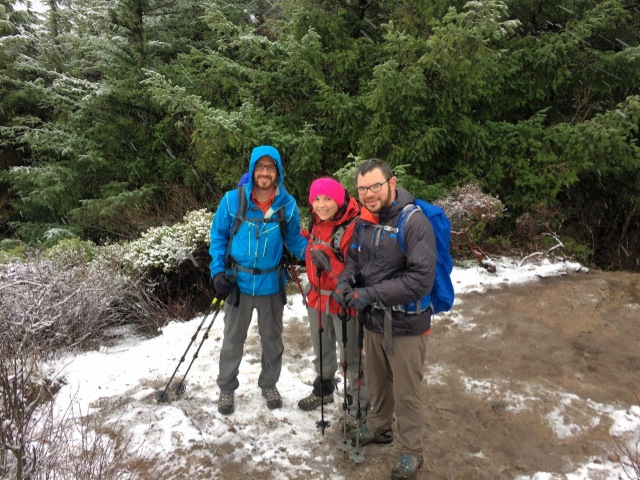 After breezing up to Rattlesnake Ledge we added on the super snowy East Peak extension. We didn’t go far before the wintery mix turned to full snow, which had started to seriously accumulate. I was in the back of the line and grateful to be able to follow in the footsteps my husband and friends were making ahead of me.

While a few people had set out ahead of us, everyone seemed to be turning around and heading back until we were the only ones carrying forward. We only passed one older gentleman coming back down the trail.

We continued on and eventually came to a final clearing leading to the peak. We were creating our own trail at this point through more than a foot of snow–quite the workout! 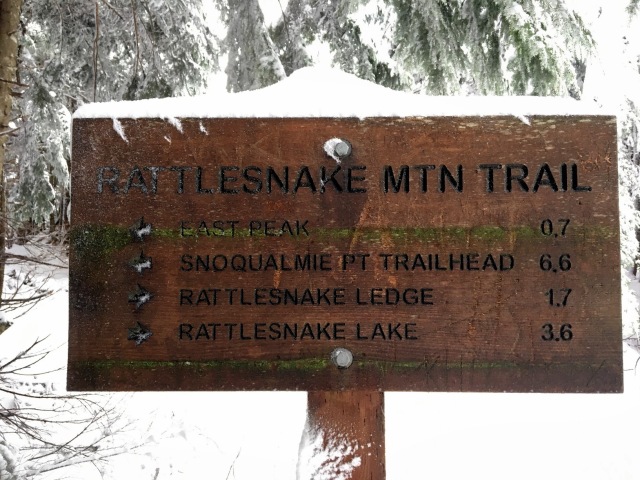 Snow was falling and the cloud cover was so dense we couldn’t make anything out at the overlook. While the East Peak extension was a bit more challenging and took quite a bit more time, it was absolutely gorgeous making our way through the snow– everything was quiet and pristine. I would recommend adding it to your Rattlesnake Ledge hike if you have the time and want a bit more of a challenge/workout!

It took us almost five hours to complete the hike. At 9.44 miles roundtrip and 2,572 feet of ascent, it was definitely one of our more challenging and rewarding hikes. I certainly have a new-found confidence and look forward to hiking with our friends more often!