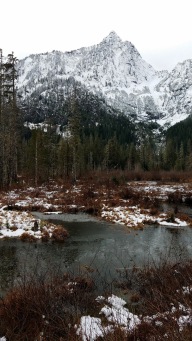 We started our new year with a hike to the Big Four Ice Caves near Granite Falls, Washington. We learned about the ice caves shortly after we moved to the Pacific Northwest, but unfortunately because a woman died there when tons of snow and ice collapsed at the mouth of the cave.

My public service announcement: Having now seen them in person, I can understand how someone might think the ice caves appear more sturdy than they are. In reality, they are heavy caverns that can easily and quickly collapse or change form as the snow shifts, avalanches occur, or the sun warms the snow.

We took some lighthearted photos near the recently installed warning signs, but in reality people had died from not taking the warnings and risks seriously. I recommend you read the signs, heed their warnings, and enjoy the ice caves from a safe distance. [End of PSA]. 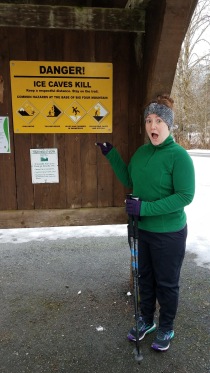 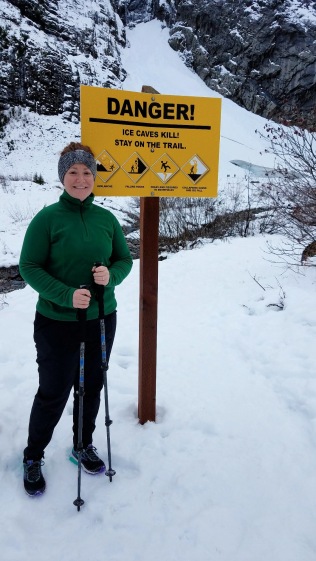 We slept in on New Year’s Day and then drove the hour plus to Granite Falls, entering the Mountain Loop Highway toward the ice caves’ trailhead and passing some of our other favorite hikes like Lake 22 and Heather Lake.

There were several cars already in the parking lot, although it was much busier when we left around 2 p.m. The multiple lots made it easy to find a spot, and we later learned that you can also park at the Big Four Ice Caves picnic area, which also has a trailhead that connects to the main trail to the ice caves.

We started with some information at the Big Four Ice Caves trailhead and learned that the Monte Cristo railroad (also a favorite hike) used to run along parts of what is now the Mountain Loop Highway and in front of Big Four Mountain, stopping at the Big Four Inn, which was popular during the early 1900s. The Inn burned down in the late 1940s but its chimney is still intact at the campground just to the right of the trail.

We decided to walk the short jog over to the campground to see the chimney before catching the main trail to the ice caves. On our hike out we took the actual trail back to our parking area, completing the full loop at 2.9 miles and 434 feet of elevation gain. 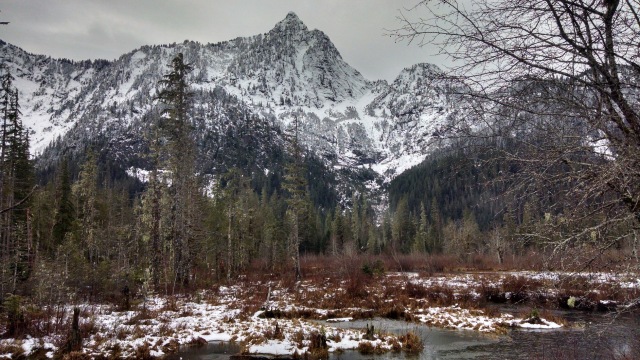 The trail had some pretty slippery ice patches. While we were glad we had our trekking poles, we were fine in light hiking shoes (eg no microspikes required).

I didn’t realize so much of the trail is paved and/or boardwalk and/or very well maintained. There were a lot of people out with younger kids, and we decided it would be a good one to revisit with our family and friends who might want to see some of the mountains and forest without getting themselves into some ‘serious’ hiking. 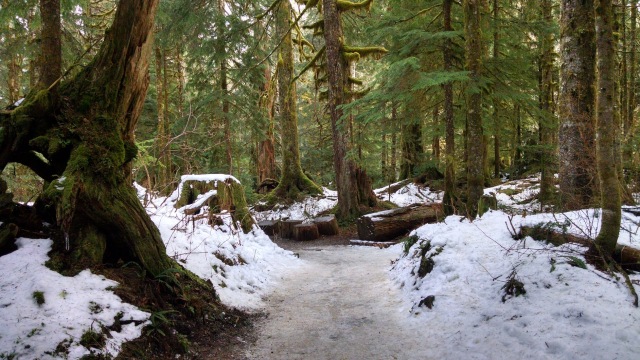 At the end of the trail there’s a beautiful view of Big Four Mountain and the surrounding area. There was quite a bit of snow and small avalanches had partially covered the openings to the ice caves. 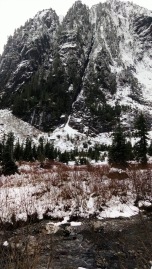 Despite all of the warning signs, people were still getting way too close to the cave entrances for my liking, and I couldn’t believe a few families that were sledding down the caves—one small shift in the snow and they could be crashing 20-30 feet down with the entire cave collapsing in on top of them.

While we didn’t see any falling snow or ice while we were there, the sun was out, it wasn’t clear how stable the snow was, and I didn’t really want to stick around to see what might happen. We enjoyed them from afar before hiking out. 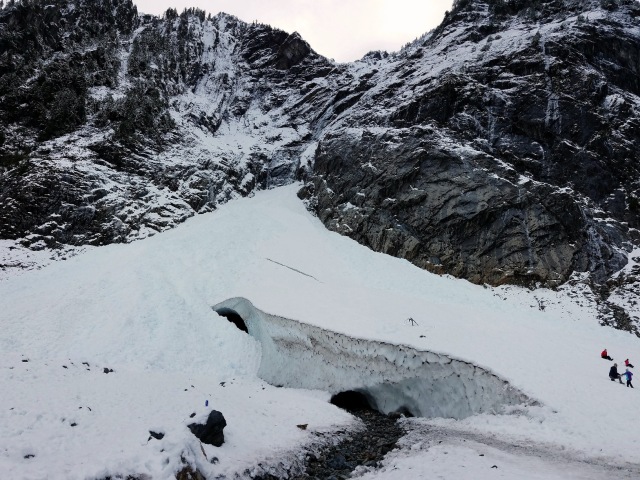 The Big Four Ice Caves have been on our list forever, and I’m glad that we were not only able to finally see them, but that we were able to hike out in the winter and see them in their full, snowy glory. I would definitely add this hike to your list!