We spent two nights in Forks at the beginning of our motorcycle trip around the Olympic Peninsula so we would have plenty of time to explore La Push and its beaches as well as Ruby Beach and the Hoh Rain Forest.

It was great staying in the same place a couple of nights so we could off load a few of our things rather than carting everything around on the bikes. We fit everything for our trip in two tank bags and one backpack, but we had to leave everything unattended on the bikes each time we stopped to explore. Thankfully no one bothered our bags or our gear–faith in humanity briefly restored!

Even so, I had greater peace of mind knowing our extra items were safe in our room, and I’m now thoroughly convinced we need bigger bikes with actual saddle bags if we’re going to continue going on longer trips by motorcycle!

We started our morning with breakfast at Forks Coffee Shop, which was one of two restaurants within walking distance of our hotel. It reminded us of a little diner in our hometown in Ohio where everyone seems to know each other and it’s pretty apparent who isn’t from the area (in this case, us).

Afterward we headed south in search of Ruby Beach. We definitely made the right decision hitting the beach first– the sky was blue, the sun hadn’t had a chance to heat things up too much, and there weren’t nearly as many people as when we left around mid-day.

There’s a small overlook by the parking lot that affords some beautiful views of the beach and a short winding trail through the woods to the beach itself. We climbed over some big pieces of driftwood and out to the water and headed south along the coast, checking out the tide pools and some small caves in the sea wall.

We also walked north along the beach, jumping over some streams and climbing up on rocks along the shore to watch the waves crash in. It was moderately windy and the waves were gigantic and just rolling in, one after the other. It was absolutely beautiful!

Despite everything we had read, we didn’t come across any sea life in the tide pools. There were dark mussels covering the rocks along the water, but nothing like the anemones and starfish we saw at Rialto Beach. It could have been the time of day, position in the low-to-high tide sequence or the significant waves crashing in, I suppose. Nevertheless, we really enjoyed this beach and I can see why it’s constantly topping the lists of places to visit on the Peninsula. 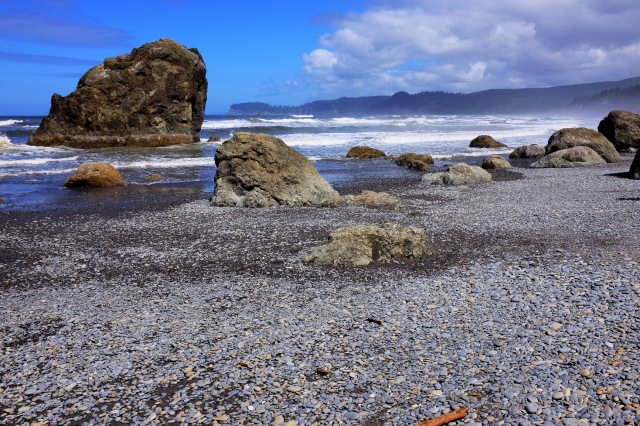 It was mid-day as we hauled ourselves back into our gear and carefully navigated the gravel drive up and out of the parking lot. That was one of the more concerning areas for me–I’m continuing to grow confidence in my abilities, but off-road gravel is not remotely my favorite thing to ride on.

We drove north and then east as we headed toward the Hoh Rain Forest visitor center, all the way looking for the single place to eat along that route–Hard Rain Cafe. This little burger joint is really the only option if you need to grab something in that area so we swung in, ordered some food and grabbed a picnic table on the porch.

After a quick lunch we headed on into the park–so. many. people! We made our way to the center and glanced over the trail maps before heading out to explore the well-known Hall of Mosses.

The trail was absolutely packed and I was quickly annoyed with the people disregarding the signs asking them to stay on the trail. Person after person climbed over fencing and out into the woods, trampling things along the way, in order to get the perfect selfie. I’m 100 percent in support of exploring nature, but I’m also a rule follower. We moved ahead of the large group that seemed to be traveling together and enjoyed the peaceful sounds of nature as we continued along the trail.

I tried to keep up with the signs about the different types of moss–while I can’t name them all or distinguish which is which when looking at them, it’s clear they are distinct varieties, many of which I haven’t seen before.

We circled around and caught the Spruce Nature Trail next, which eventually wound around to the river with some lovely views of the mountains. There were fewer people on this trail and we enjoyed the quiet hike through the forest.

Note: My husband was originally confused by this so I thought I should call out that Pacific Northwest rain forests are unique temperate rain forests and not to be confused with tropical rain forests.

It was late afternoon as we geared up and headed back to Forks–a full but wonderful day exploring the area and getting to see more of the beautiful Olympic Peninsula. 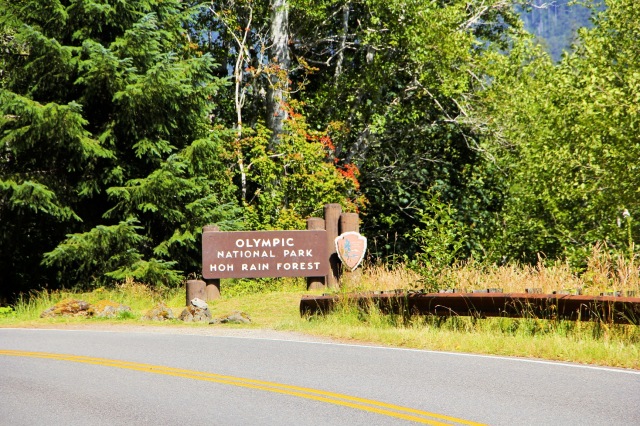 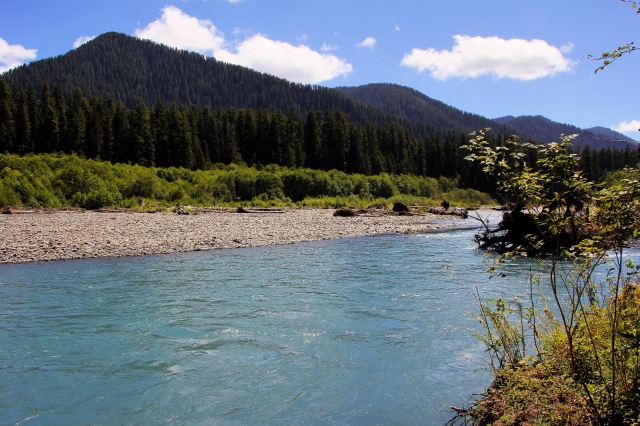 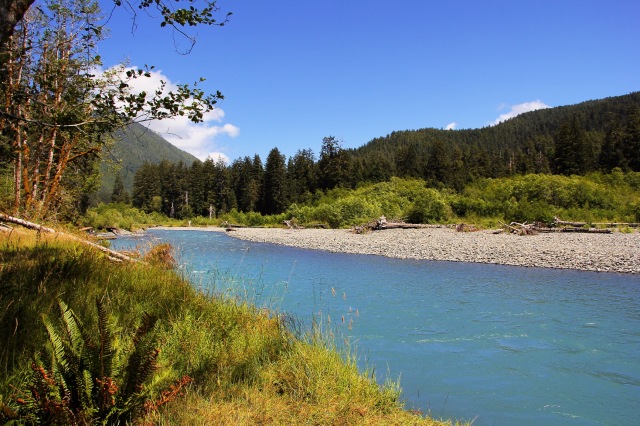