Each day of our recent motorcycle trip around the Olympia Peninsula included something new–something we had never seen or done before.

After arriving by ferry in Kingston and riding a ways, we made a quick stop for gas and brunch in Port Angeles. We popped in Cock-a-Doodle Doughnuts to snag a snack from among the last remaining doughnuts and then walked around the area and ferry docks before making our way to New Day Eatery for the rest of our meal.

The food was ok–what really left an impression on me was Larry, the guitar player! He was sitting just inside the other room and there weren’t any available tables or we would have joined him.

Instead, we enjoyed his singing and guitar playing from the next room and made note of a few songs to add to our own set list.

After brunch we sped across the peninsula to Forks, WA, which is rather well known thanks to Twilight.

It was a little too early to check into our hotel so we hopped back on the bikes and headed to La Push to check out some of the beaches.

We started at First Beach, also made famous by Twilight. We were able to pull the bikes right up to the water in a fairly large parking area and left our gear on as we walked down to the beach.

I quickly discovered that all of the beaches have TONS of driftwood. In fact, you have to climb over several yards of it to even get to most of the beaches. If you’re not up for a little workout, you might not be able to access the beach!

The waves were huge and crashing to shore one after the other. There were a few kids playing in the water but mostly surfers trying to catch the bigger waves. Everyone else was lounging on shore, enjoying their Saturday on the water. It was hazy but we did have some blue sky and beautiful views along the coast. 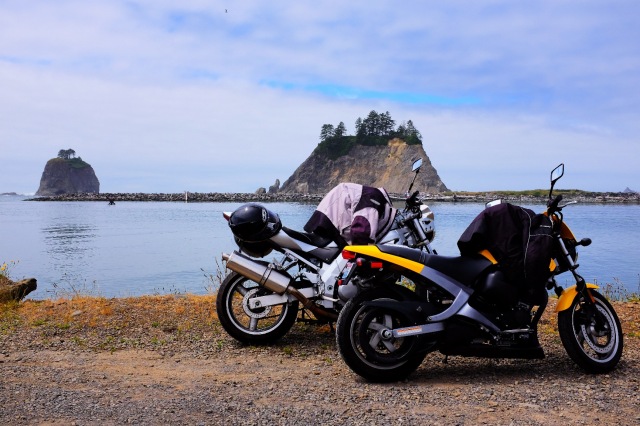 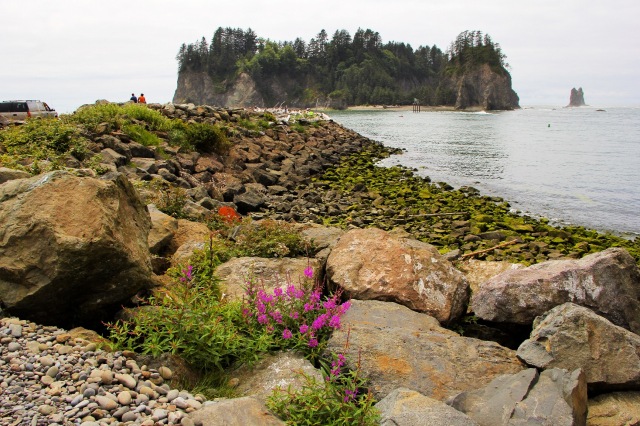 We hopped back on the bikes and rode up the hill toward the parking area for Second Beach. I didn’t know if we would have time to hike out to all of the surrounding beaches so I had looked into them ahead of time. Almost all of the blogs I read recommended Second Beach over Third Beach so we decided to give it a try!

It’s about 2.5-miles roundtrip to hike to the beach, which then gives you a 4-mile beach to explore. There were huge logs barricading the beach at the end of the path, but we were able to navigate them and ended up down by the water.

I was pretty impressed by the number of people who packed their camps down to the beach– extensive tent set-ups, camp fires and people spotted the treeline all along the beach. We passed a number of people carrying huge coolers and gear from the parking area down the hill and out to their camp spots. Not exactly for the faint of heart!

It was still pretty hazy looking out over the ocean, but there were nothing but blue skies behind us over the forest. 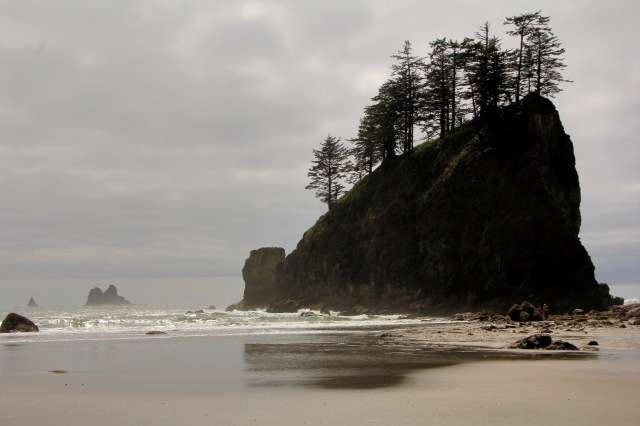 Despite the bright sunshine it was after dinner time so we decided to skip Third Beach and head to Rialto Beach, which I really didn’t want to miss.

Although Ruby Beach is usually referenced when people talk about seeing starfish and sea life, I actually read that the tide pools at Rialto have as much or even more to offer. We were not disappointed!

By the time we arrived and got out of our gear and down to the beach, the wind was picking up and the waves were tumbling in. Our goal was to hike the 4-miles roundtrip to see the Hole-in-the-Wall, which I thought would be easy.

We barely started out when I realized how long and difficult this hike was going to be! It’s not the distance that’s the problem–it’s the beach! It’s all small pebbles, and every step you take your foot sinks into the stones and you have to quickly balance and take the next step. Thankfully the beach was beautiful and the waves kept us occupied because it felt like it took forever! My core and inner thighs were definitely feeling it the next day!

Eventually we made it to Hole-in-the-Wall. There were actually quite a few people there, many of whom were setting up tents with intentions of spending the night. I imagine it’s beautiful watching the sunset and seeing the sunrise right out on the beach.

It was twilight by the time we hiked back to the bikes, suited up in our gear and rode back to Forks to our hotel for the night.

It was an absolutely incredible day full of tons of firsts:

Perfect first day of our adventures around the Olympic Peninsula!

7 thoughts on “The Beaches at La Push”