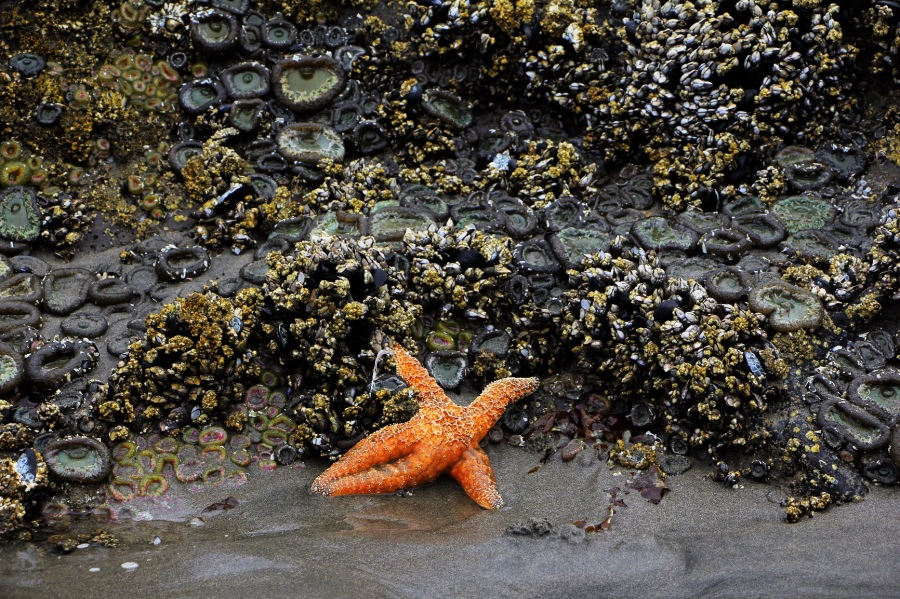 There are so many things to learn when you move somewhere new, and among them is the geography.

I’m guessing many people have heard of Long Beach. I certainly had. I just assumed that when people here in Washington were referring to it, they meant the one in California. In my defense, a ton of people who live in Seattle are from California. It wasn’t that big a stretch.

However, I soon learned that Washington sports its own Long Beach, a peninsula that–as you might have guessed–has a very long boardwalk and beach!

While Brian and I have explored parts of the Olympic Peninsula and driven route 101 along a good portion of the west coast, we had missed Long Beach, Washington. When my parents proposed meeting us there for a weekend, we were in! Brian picked me up after work, we had a slightly painful drive during rush hour traffic through Seattle, Tacoma and Olympia, but when we turned onto route 101 south just beyond Olympia, everything opened up and we were excited for our weekend on Washington’s southwestern coast!

Leading up to our trip, time got away from me and I hadn’t spent as much time as I would have liked looking up things to do in the Long Beach area. Still, based on the little research I did accomplish, it was obvious there were tons of things to do, from hiking and exploring the beaches, to visiting lighthouses and small seaside towns, to discovering the history of the area.

My parents had picked up a few brochures so the evening we arrived, we spent a little time making our plans for the weekend before heading to bed. We decided to spend most of our Saturday exploring various aspects of the 17,000-acre Willapa National Wildlife Refuge, the second largest estuary on the Pacific coast with more 260 square miles of water surface!

We had the right clothes to go exploring but not to do any intense hiking. Thankfully the Willapa National Wildlife Refuge offers a variety of trails of every length, elevation gain, and difficulty level. We decided to start our Saturday with a nice leisurely walk along the Willapa Art Trail, an easy, half-mile roundtrip boardwalk trail near the Refuge Headquarters.

The weather was nice and the walk was easy and peaceful. As the name suggests, there are a variety of sculptures and works of art on and along the trail to enjoy as you head over the marsh and into the woods. 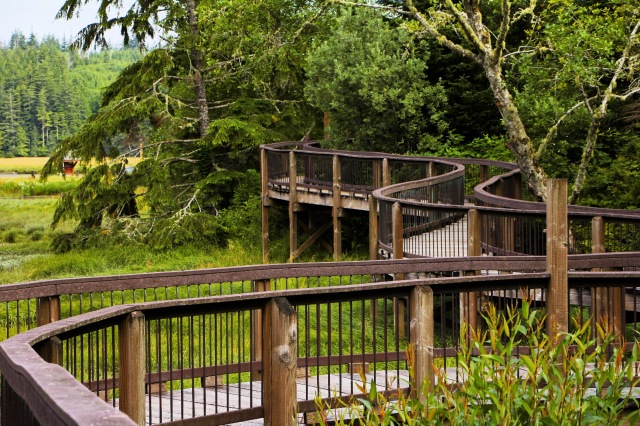 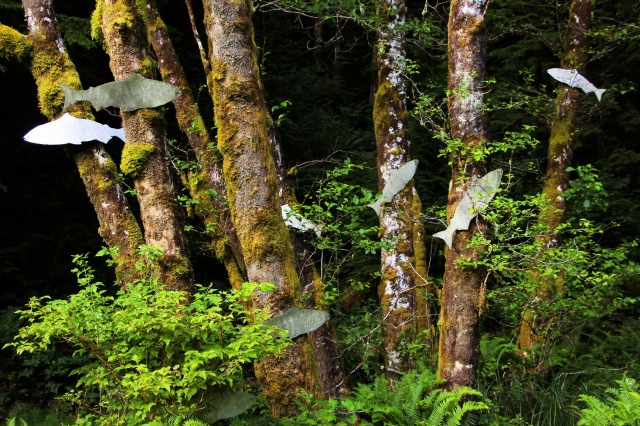 Things got interesting when we reached a turnoff for Cutthroat Climb, a moderate, three-quarter mile roundtrip trail just off our art walk path. My dad led the way and the next thing I knew we were clamoring through the woods on a fairly well maintained forest walk.

Along the path were different interactive exhibits with trivia about the local flora and fauna. We each took a turn trying to identify different animal prints, and I quickly learned I have a lot more to learn about Washington wildlife!

Everything was lush and green, and I especially enjoyed the clover and these beautiful purple flowers that might have been foxglove. It was somewhat challenging taking pictures in the shadows, but we got one really good one of the four of us mid hike! 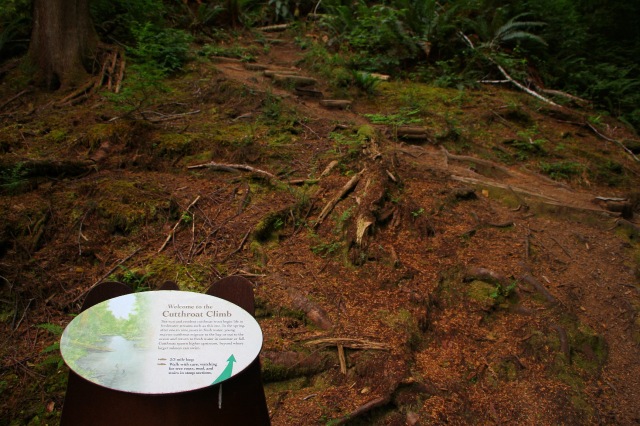 After our hikes we drove to the southernmost tip of Long Beach in search of beach access. We had looked at the tide tables and tried to perfectly time our arrival at Beards Hollow in Cape Disappointment State Park, which was supposed to have some awesome sea life during low tide.

Sure enough, we ended up seeing some incredible plants and animals in the tide pools! We parked and walked a short trail out to the beach where a few other people were camping and exploring around the exposed rocks. We all circled around the tide pools as well, trying to avoid getting wet as the water raced in and out. My dad took off his shoes and socks and put on some sandals so he could do a little water wading, borrowing my camera at one point to go get a shot of a bird that was hiding among the rocks.

There were tons of green sea anemones, and I was really excited to find one that was a purple/pink color as well! While we’ve seen a few on other trips, it was one or two here and there–nothing like the piles of them we were lucky enough to experience here. They were beautiful and it was fascinating watching them begin to close as you walked by and cast a shadow overhead. I tried to stay back and then stoop down for my pictures so they stayed wide open and undisturbed. 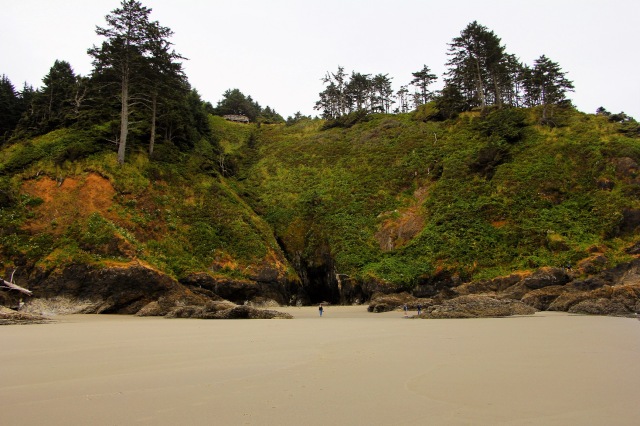 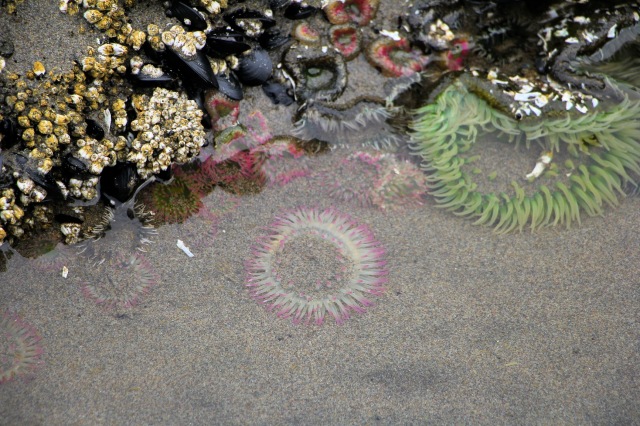 I was also thrilled that we got to see a few starfish, and that they looked nice and healthy! When we first moved to the Pacific Northwest, it seemed like there were constantly stories in the news about sea star wasting disease, which is impacting starfish all along the Pacific Coast. While scientists have since discovered the virus causing this issue and there is more attention and monitoring of the situation, it is still a problem and causing the mass mortality of multiple types of starfish.

The starfish I saw all looked in good shape–in tact and free from lesions. I saw purple and orange starfish along the coast before, and this time there was also one that was a lighter shade of purple–almost pink. Some of them were tucked in between the barnacles and hiding along the exposed rock where the tides were flowing over and around them. 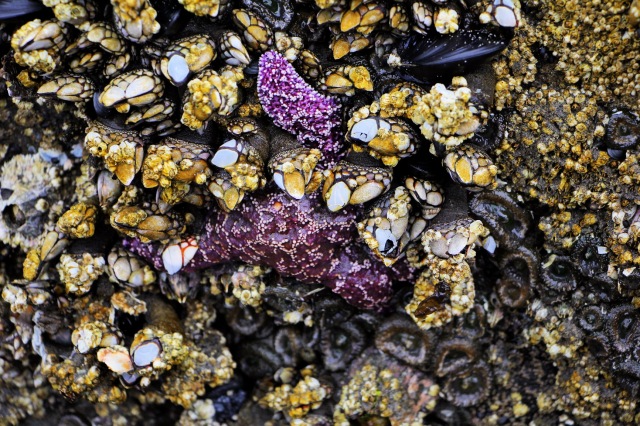 My dad’s water wading also took him into some tide pools full of crabs! They would burrow down in the sand, but you could see small parts of them that were a little exposed, and he could quickly scoop them up and out of the water!

A couple of guys at the same tide pool had a rake and were pulling them out one after another, checking to see if they were male or female, and returning the females to the pool where they quickly scuttled back under the sand. They ended up with a bucket of several males that they were planning to enjoy later that afternoon! 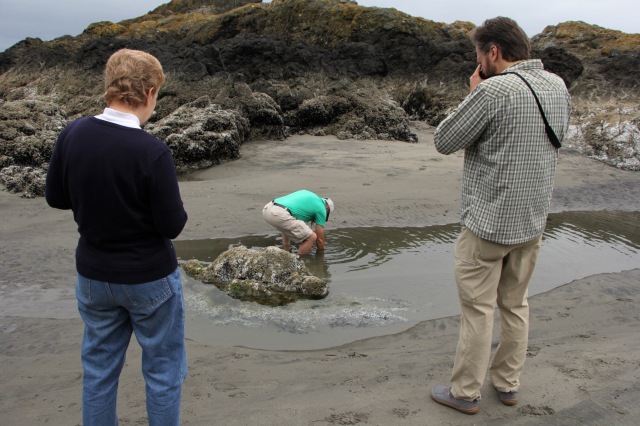 The tides were starting to head back in and a light rain was beginning to fall so we wrapped up our beach activities and headed back to the car. Our last stop of the morning was the Lewis and Clark Interpretive Center, where we were looking forward to learning more about the history of Cape Disappointment and the Long Beach area!

The Lewis and Clark Interpretive Center stands high on the cliffs of Cape Disappointment State Park, 200 feet above the pounding Pacific surf. A series of mural-sized timeline panels guide visitors through the westward journey of the Lewis and Clark Expedition using sketches, paintings, photographs, and the words of Corps members themselves.

Having experienced a little of the Lewis and Clark trail along the Columbia River Gorge with my parents last summer, I was excited to learn even more about this area where the Corps of Discovery concluded its journey to the ocean.

We ended up spending several hours at the center, reading all of the information plaques and interacting with the various exhibits. We made sure to stamp our tickets when we completed the information and activities at several key points, including Pompey’s Pillar in Montana, Station Camp along the Washington bank of the Gorge, and Celilo Falls, which became submerged for good when the Dalles Dam was installed in the late 1950s. 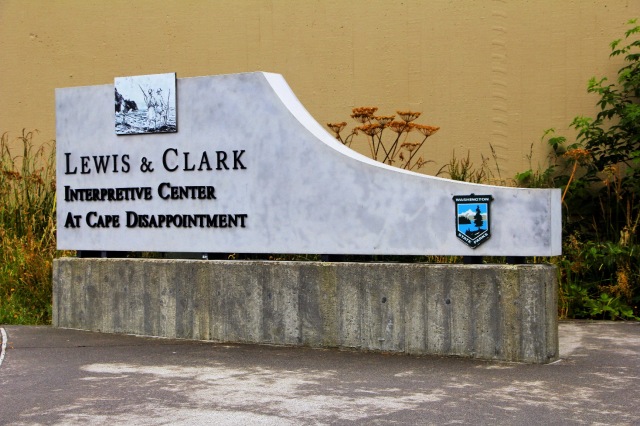 The tour through the center concluded at a glassed-in observation room full of maritime memorabilia, including colorful glass floats and an old lighthouse lamp! The room offered great views over the Pacific Ocean and toward the North Head Lighthouse.

We were all ready to hit the road and find some lunch at the end of our adventures. The weather still wasn’t cooperating so we decided against taking the trail out to the lighthouse itself. I am adding that activity to our list for next time–and I envision there will be a next time because we only scratched the surface of all there is to do in the Long Beach, Washington area.

Whether you’re looking for a relaxing stay on the beach, the opportunity to learn a little about our nation’s history, or want to explore the acres of state park and national refuge, there is really something for everyone in this beautiful section of the Pacific Northwest! 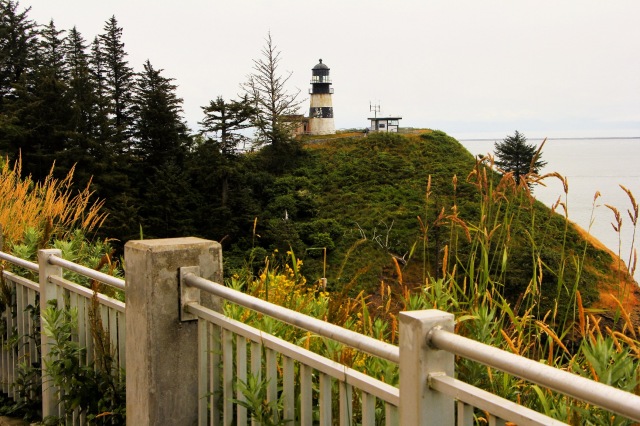 3 thoughts on “Hikes and History of Long Beach, Washington”