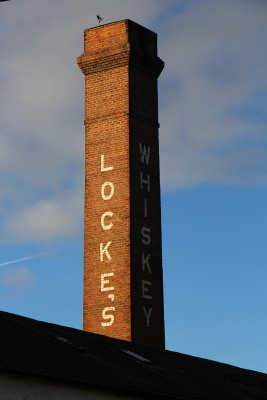 We only had a couple of weeks to explore Ireland so we decided to focus on a northern loop. We flew into Dublin, drove north to Belfast, headed along the Antrim Coast to Coleraine and Derry, circled around through Donegal and Connemara, and rounded out by the Aran Islands, Galway and the Burren.

Our flight home was also out of Dublin so we had to drive across the Republic from Galway to Dublin to return our rental car and enjoy our last few days in the city.

I originally thought we were basically writing the day off–what would we really see crossing the country on a main highway?

But after looking into it, I found some wonderful stops along the way.

We left our great house in the morning after breakfast and headed to Clonmacnoise to explore the monastic site. The visitor center had a nice display of some of the original crosses and stonework, and we watched a short video that explained its extensive history. The site was founded in the mid-500 AD!

There were quite a few visitors, including some school groups and religious groups holding a ceremony, but we were free to explore the site and take pictures.

The weather was beautiful and we ended up walking away from the main site to some of the other ruins a ways away. 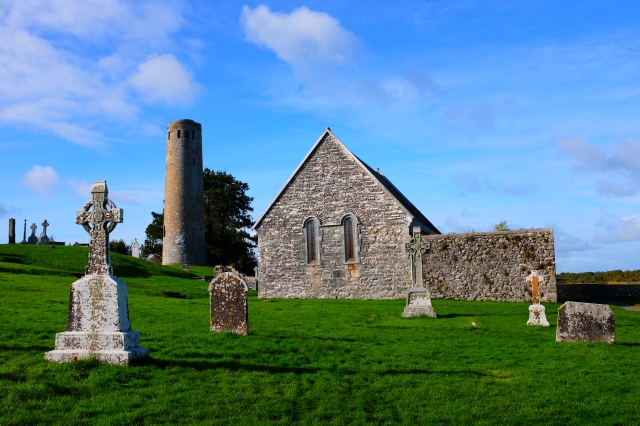 From there we headed north to Athlone, an old town sitting on the River Shannon, to see the Athlone Castle and the oldest pub’s in Ireland, Sean’s Bar.

We parked in the old town and wound our way through some alleys and small roads to the castle. It’s still in tact and impressive on the outside, and we had some great views of the townhalls, churches and river.

If we’d had all day to explore I would have looked into a river cruise or found one of the restaurants along the water for lunch. The old part of town was much more interesting than I had originally thought!

We paid to go inside the castle, which has been converted to a museum. It was very family-friendly but even the exhibits meant to interest kids interested us and we played some of the games as we made our way through.

After the castle we headed over to Sean’s Bar. It was packed and there was a guys playing guitar and singing, which was perfect! We managed to find seats and enjoyed a pint while listening to the music. His set was over just as we finished so we wrapped up our stay and headed on to Kilbeggan. 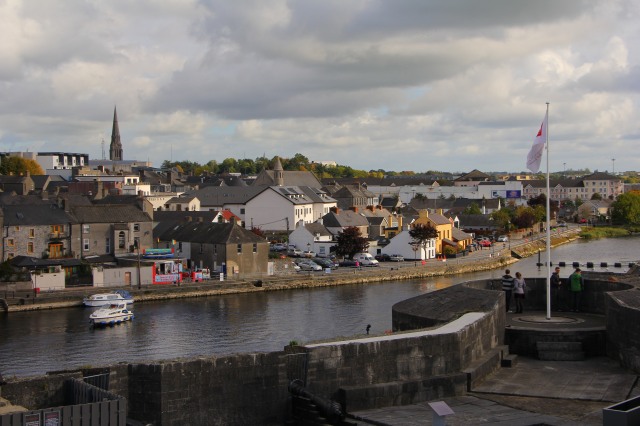 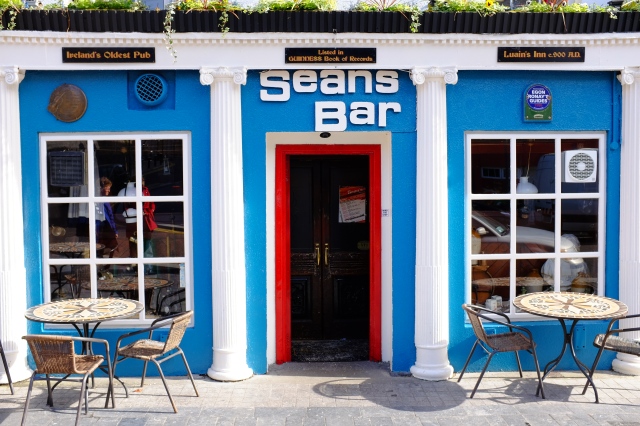 The clouds started rolling in while we were in Athlone and it was raining by the time we pulled up to Kilbeggan Distillery. The self-guided tour was primarily inside so the weather wasn’t a problem–I was glad we spent the beautiful morning doing our outside activities.

The distillery sits along the river and all of the original processing equipment is still available on the tour. It was less formal than the Bushmills tour but still enjoyable, and of course we hit the tasting room at the end. We tried Killbeggan, Connemara and Locke’s whiskey–I didn’t realize they were all made by Killbeggan– and bought some bottles to bring home.

We also hit the cafe and shared a platter of food for lunch before heading east to Dublin. 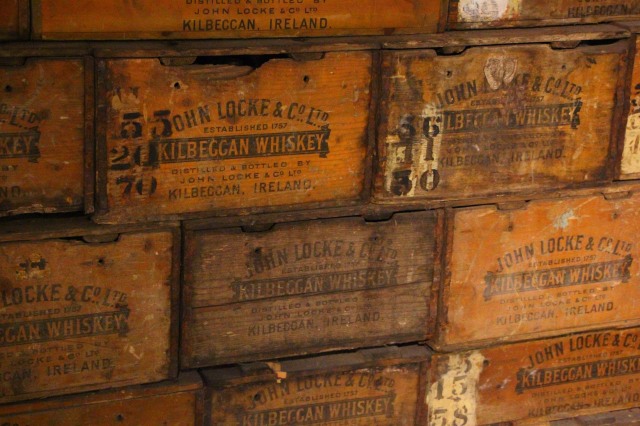 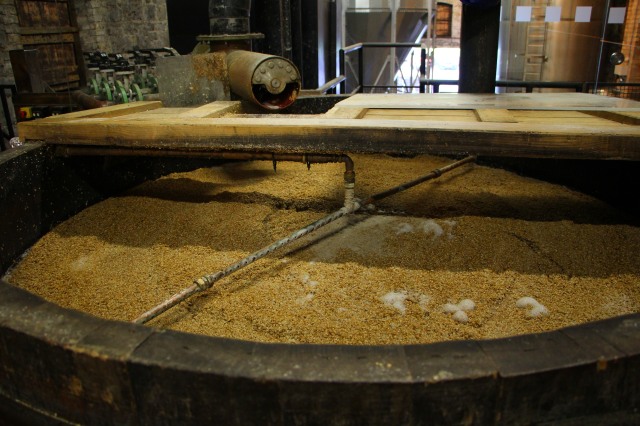 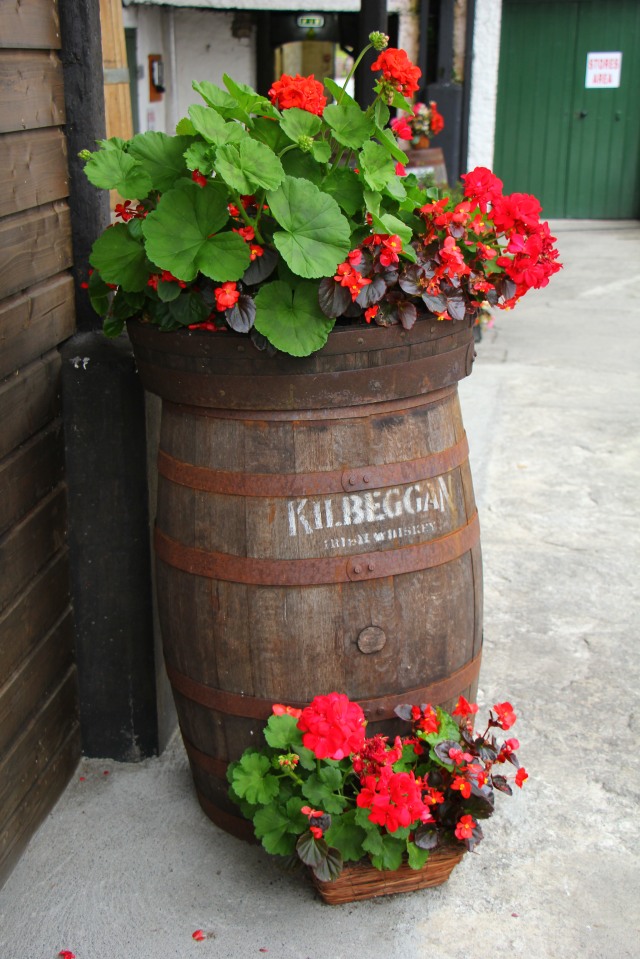 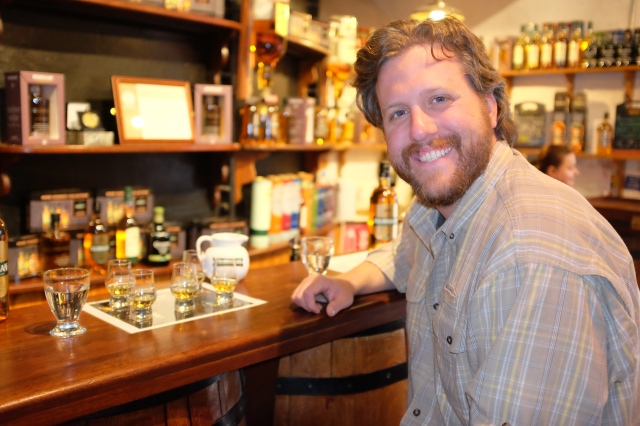 We got to Dublin just in time to check into our hotel and return our rental car before it was due.

I wasn’t on our rental car agreement so Brian drove us all over the country. He did a great job shifting with the opposite hand and driving on the opposite side of the road, and although I know he didn’t love some of the narrow roads, especially down in the Burren, I really appreciated him driving and letting me sight-see and enjoy all of the scenery. He’s the best!

I realized as we parked that I hadn’t taken any pictures of him driving us around Ireland so I snapped this quick picture before we caught our taxi back to the hotel. 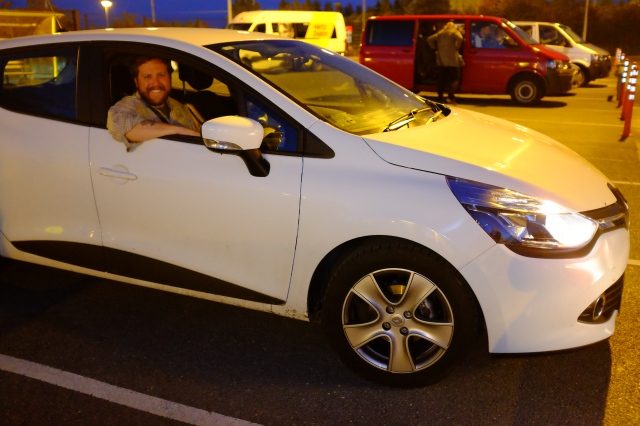 It’s easy to follow the coastline and stop at all of the seaside towns whose names often appear in Irish songs and lore. And the seaside is beautiful. I would never suggest someone miss the Antrim Coast or Wild Atlantic Way during a visit to the Emerald Isle.

However, I would suggest that inland Ireland holds lots to be discovered as well. Consider traversing lesser known roads or even some of the main thoroughfares and stopping at places less familiar. Ireland has lots of surprises.