I am not kidding when I say that the majority of my anxiety regarding our cross-country move stemmed from relocating our seven-year old male cat, Seppy.

My husband and I went back and forth about whether we should take him via car or plane. I was in favor of car at first– he would be with us and we would all arrive at our final destination together.

My husband reminded me how much Sep loves riding in the car on the way to the vet (a 20-minute drive) and how much he would probably love driving across the country (a 40-hour drive). He also made a convincing argument regarding our ability to see anything on our drive out if we had Sep in the car.

I finally conceded that the plane ride was probably the best for everyone involved.

It’s just that I’ve never flown with a pet!

Luckily some of my friends and former work colleagues have flown with their cats and small dogs, and they were VERY gracious in sharing the process with me as well as words of wisdom and a few dos and don’ts from their experiences. My luck continued when we discovered that Frontier Airlines, which bills themselves as being pet friendly, recently opened a seasonal direct flight from Cleveland to Seattle. The direct flight seemed like the best option for getting things over and done as quickly and painlessly as possible for both me and Seppy.

I ended up doing a somewhat crazy round-trip to get Seppy from our house a couple of days before it closed (this involved a red-eye home and a return flight 12 hours after I landed–at this time I would like to give a shout out to my friend Katie who not only picked me up from the airport at an obnoxious hour on a Saturday, but let me crash on her couch all morning, as well as my parents who put up with both me and the cat crying on the ride back to the airport. Seppy because he hates the car, and me because I hate when Seppy is upset. It was a fun ride for everyone.)

Ultimately everything went perfectly, so I wanted to share some of the advice I took in case it’s helpful to anyone else who might be flying with a pet– particularly a cat.

Flying with a Cat: Things to Do Before Your Flight 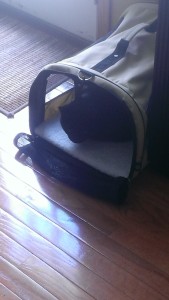 Flying with a Cat: Things to Do During Your Flight

Flying with a Cat: Things to Do After Your Flight

Flying with the cat was a success. Huge kudos goes to the Cleveland Hopkins International Airport (CLE) TSA staff who were INCREDIBLE throughout the security process. The security line was light, and everyone I encountered was very helpful in letting me know what I needed to do, helping me get Seppy in and out of his carrier, and making sympathetic noises to comfort Seppy.

The helpfulness continued when I boarded my flight. The Frontier hostesses all asked who was with me, how old he was, what they could do to help, etc. They were also completely supportive when I moved him under the empty seat next to me and checked on us several times during the flight and when we disembarked.

I don’t particularly want to fly with him again– I don’t think he exactly enjoyed the flight– but I am relieved everything went well and it was such a positive experience. He made so little noise on the flight that I wonder how many other pets were on the plane, unbeknownst to me, quietly traveling with their humans as well.

If I haven’t said it enough, I just want to say once again that I am indebted to everyone who offered me advice. Thank you, thank you, thank you. It was so helpful, and I hope these shared tips are useful to others!