We have been on the move for so long that we decided to use the long Memorial Day weekend to catch up on a few things:

We were successful on all accounts, although the house hunting is getting discouraging. There is simply no inventory, and half of the time the houses go pending while we are standing inside them.

Oh well–the perfect house has to be coming on the market soon!

As far as local happenings go, we were able to check out two.

Our first stop was the Fremont Sunday Market, which is a decent sized market along one of the front streets downtown. Vendors range from food stalls to arts and crafts to second-hand items. Overall it had the feeling of a flea market more so than a farmer’s market, which is what I was envisioning, but there were tons of people (with their dogs! The best part!) so we had a good time wandering around.

I was nearly tempted to buy at one of the stalls that made their own pickled products. Brian tried one of their dill pickles, and I had their pickled asparagus. It was delicious– if I see their products elsewhere, I may be enticed to make a purchase.

Once we visited all of the indoor and outdoor booths we headed south to Seattle Center where they were hosting the 44th Annual Northwest Folklife Festival!

My husband was not particularly excited about this outing. The day before we went, I overheard him describing the festival to his family, and his commentary included disparaging remarks about Joni Mitchell’s voice (which I LOVE) and something about ending the war in Vietnam.

He was clearly lacking the free spirit necessary to enjoy this festival. Luckily he changed his tune once we successfully parked and walked up toward the Space Needle and the festivities! The festival is much more than a celebration of folk music, although there were certainly a wealth of folk music performers both on stage and on the street.

The festival is really a celebration of the music, people and overall cultural of the Pacific Northwest, so the people, vendors and musicians were highly diverse. We walked along a lengthy row of food stalls and passed at least a dozen street performers (musicians + theatrical artists) along the way. One team of acrobats offered everything from juggling to unicycle tricks to tight-rope walking– audience participation opportunities included! 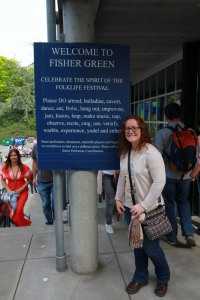 We saw a couple of great groups– one was a bluegrass/rock group and the other was more of a jazz combo. Some of the musicians would play with one group and then jump over and join a different group that was performing a street corner over. I loved it!

We walked around the fountain and by the different formal stages of performers and there were people everywhere!

It was definitely a bit bohemian– my husband could not get over how many people were walking around without shoes.

In their defense, there was a lot of grass and a big fountain to play in. In my husband’s defense, there were also a lot of animals, trash and just the general side effects of thousands of people together in a small place littered about the ground.

In my defense– make love, not war. People not wearing shoes = part of the experience. (Note: I kept my shoes on.)

We wound around by a big hall filled with people dancing to an awesome zydeco band. So. Much. Fun! I’m not sure I’ve ever heard a zydeco band live– my only reference is the Gilmore Girls episode where the zydeco band shows up to audition for the wedding Lorelei is no longer having. Now I get it!

After enjoying a bunch of music we decided to try one small taste of the festival fare by way of the Dumpling Tzar.

They had an easy menu of dumpling options and a few sides, but we sprung for the dessert dumplings, which were basically fried dough with sugar and caramel on top with a side of ice cream.

In case the photo is a little unclear– they were delicious!

We had only paid for a couple of hours of parking so we perused a few of the booths on our way out. Luckily the weather was sunny but cool so we were more than comfortable walking around. Had it been hot, it might not have been quite so enjoyable given the throngs of people.

I would go again, especially if I had a little more time to look up some of the performers in advance. We saw signs for tons of other festivals as well so I look forward to checking those out. If you’ve been to any Seattle-area festivals, please let me know!

Here are a few more pictures from our day: