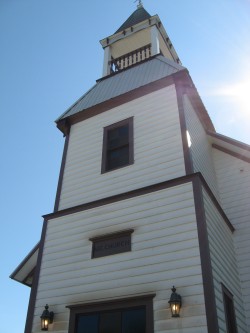 We haven’t been doing much or going anywhere since we’re really getting close to the wedding, but I did get to sneak in a local adventure thanks to my bachelorette party!

My amazing maid of honor/officiant/friend planned a wonderful weekend at Geneva-on-the-Lake, which is about an hour from us up on Lake Erie.

I had been in that area once before because we looked at a facility as a possible wedding reception location, but I had never experienced what the area is most well-known for–the wineries!

There are about 20 wineries through Geneva-on-the-Lake and in the surrounding area, and most people making a weekend of it stay at the Lodge at Geneva and take a wine tour.

We checked in and then a handful of friends met us at the Lodge so we could catch an afternoon shuttle to begin our winery tour.

We started at Ferrante, which is one of the bigger productions. There was a very well developed restaurant, and our shuttle driver mentioned it was one of the nicer ones, which is why he usually started there for most tours, before everyone started to really have a good time.

The weather was BEAUTIFUL. We sat out under a shaded pavilion/gazebo near some fountains and looked out over the water and fields. Katie bought some samplers of wine, pizza and a cheese, cracker and meat spread for us to all share. There was another huge bachelorette party there as well as lots of other customers just enjoying a meal. The ladies were all wearing crazy hats. I was glad we weren’t doing anything like that!

We finished and then headed to Debonne, where I could have stayed at much longer. It was a really large facility, and there was actually a wedding reception underway when we arrived! We got our samples and headed out to the lawn and patio areas to find a picnic table. It was a little warm in the sun, but it was wonderful out. A band had just set up and started to perform as we were heading out.

I could have sat and drank wine and enjoyed the live music all afternoon, so it was a good thing we were only spending an hour or so each place.

Our third stop was the South River Vineyard, which most people know as the Church Winery because it’s a relocated and gutted church! Almost everyone goes to this one because of the novelty but also because it has one of the most beautiful views overlooking the grounds.

We were able to squeeze together some chairs out back on the open pavilion so we could look out over the fields and vineyards and just relax and chat. It was perfect.

There were a lot of people, and we didn’t get to walk down to the second pavilion, but it had a big open fireplace, and I can imagine it would be just as amazing in the late fall or winter looking out over the snow, wrapped up in a blanket and sipping some wine in front of the fire.

One of my friends had just been there the week before–and gotten engaged!–so she bought a bottle of wine before we left to take to her fiance in memory of their previous weekend. Unfortunately the other party was using the same shuttle and they accidentally took her bottle! Fortunately our shuttle driver was able to track it down and have them leave it for her at the Lodge.

Our last stop was the Winery at Spring Hill, which was probably the most low-key. We just got a bottle of wine to share and another one of my friends drove separately and met us there. We caught up while the other ladies played cornhole. I loved that everything was so laid back and relaxing all day. We kept moving, but it never felt rushed.

When we finished, we headed back to the Lodge. One girl had to leave, but the rest of us headed to the restaurant for our reservation and started looking over the menu.

Three more friends met us there for dinner, so we had a fun table and lots of good food. Two of the three are pregnant, which is why they skipped out on the wineries, but we caught up over food and I had a lovely coffee drink after dinner that helped me get through the rest of the evening.

I opened my gifts at dinner, which were very cute and thoughtful!, and then most everyone packed up to leave. Three of us stayed and decided to head downtown to see what else was going on, but it was a lot of bachelorette parties just getting started. Not really our crowd. We were to the Firehouse Tavern where there was supposed to be an Irish Festival. It must have ended before we arrived, but they did have a live band so we hung out and listened to music and talked. It was the perfect end to the evening.

We went back to the Lodge so the one could go home, and my maid of honor and I crashed and were in bed by 11:30 p.m. PERFECT!

We got up at a reasonable time on Sunday and I was hope by late morning–just in time to put myself back together to go to Blossom for a Cleveland Symphony concert with my fiance and parents.

I felt like maybe I was too old for the whole bachelorette thing, but I don’t think I’ll ever be too old to tour wineries on a beautiful day with my girlfriends. One proposed we make it an annual trip, and I think I might make her suggestion a reality!

A huge thank you to my maid of honor and friends for the best bachelorette party I could have ever asked for–it was absolutely perfect and better than I could have imagined.