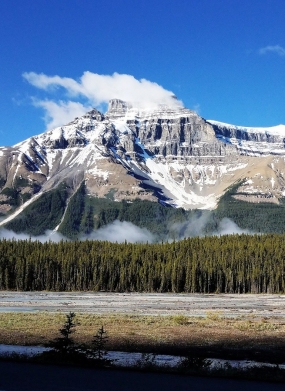 As I was researching things to do in Banff National Park, one of the experiences that always seemed to top the lists was exploring the Icefields Parkway.

If you don’t mind spending a bit of time in your car, I highly recommend driving the parkway, which runs from Lake Louise to Jasper — a distance of 145 miles (233 km).

To drive out and back in a day would be quite ambitious if you have any intention of stopping to see things along the way, which is why many people allocate two days for driving it, spending a night at either end.

We didn’t have enough time for that in our itinerary so we needed to make our out-and-back drive in one day with time for stops. We were able to do this by starting from the Crossing Resort, which is the last place to find gas and accommodations between Lake Louise and Jasper. Spending the night there allowed us to close the distance to 95 miles (153 km), which we were more easily able to accomplish in a day along with time at the Columbia Icefield in the morning and Jasper in the afternoon.

The park map you receive when you purchase your pass lists out several of the popular sites along the parkway. I had researched some recommendations in advance as well. Here were a few of our favorites:

One of the first stops after you’ve headed north from Lake Louise is Bow Lake. This beautiful, glacier-fed lake has some of the rock flour blue of the other major lakes with the advantage of being right along the road– you can park and walk along the shore.

Just north of Bow Lake is Bow Summit, the highest point on the drive from Banff to Jasper and the highest elevation crossed by a public road in all of Canada at 6,800 feet (2,088 meters) above sea level.

We parked and hiked the 4 mile roundtrip Peyto Lake Trail to the Peyto Lake viewpoint, dodging some rain drops along the way. It was more than worth it–there’s a reason Peyto Lake is the most photographed lake in the Canadian Rockies! The water was sapphire blue, and the far end of the lake–shaped like a wolf’s head–pointed toward an endless stream of mountain peaks that disappeared into the blue sky. 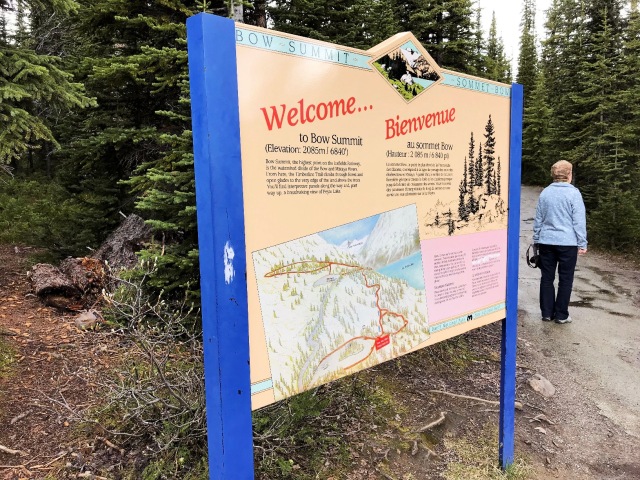 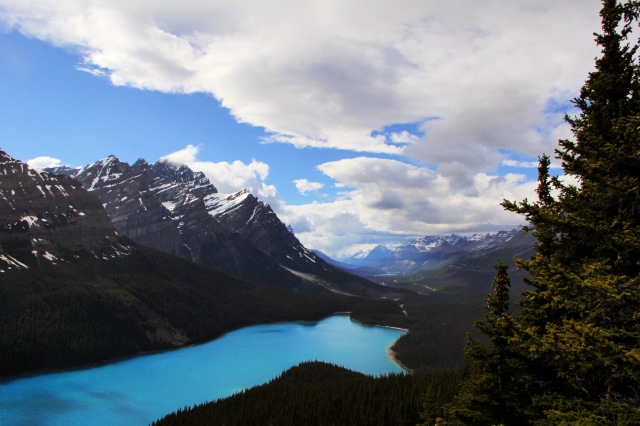 An easy pulloff and quick stop to stretch your legs is at the Weeping Wall, which is north of the Crossing Resort. Water cascades down the 330-foot face of Cirrus Mountain in a series of falls that make the mountain look as though it’s crying. 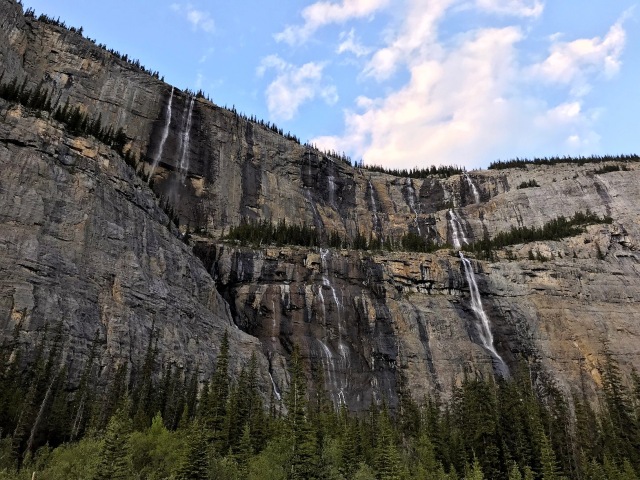 As you pass into Jasper National Park at the Columbia Icefield, you’ll find Tangle Falls along the side of the road with a parking lot just across the street. While crossing the road can be tricky, it’s worth the trouble to stand right in front of this pretty falls. 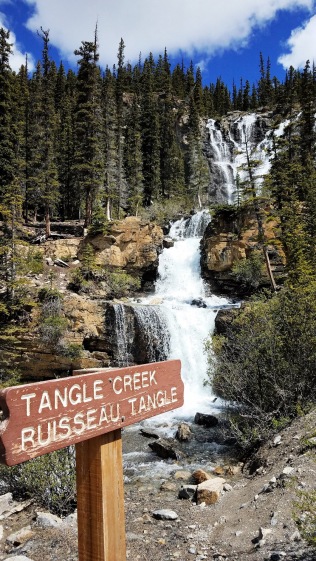 Closing in on downtown Jasper, you’ll come across signs for Sunwapta Falls. Follow the signs that lead you back along the woods to the parking area and then explore the falls as well as the trails through the woods to other viewpoints.

With a 60-foot (18 meter) drop, this waterfall was especially impressive in late spring thanks to the snow pack melting off the mountains.

Our final stop on our way to Jasper was Athabasca Falls, which is fed by the Athabasca Glacier we stood on during our Columbia Icefield adventure!

Although not as tall as some of the other waterfalls along the parkway, this one makes up for it in volume–there was a lot of water flowing! We walked to the multiple viewing platforms to catch it from different angles. 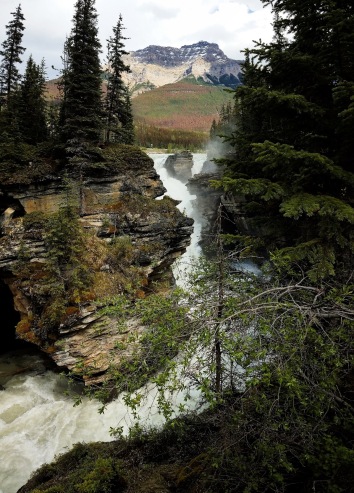 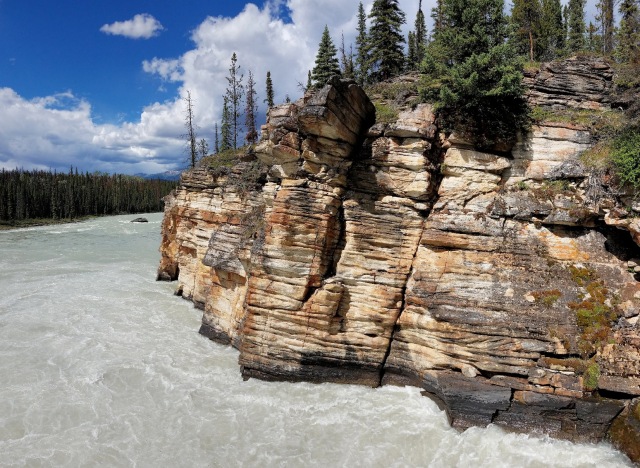 Although not technically a stop along the Icefields Parkway, a highlight was certainly seeing the various wildlife along the way.

Public Service Announcement: We remained in or in immediately proximity to our vehicle to take pictures of the animals we saw, but we saw countless others getting out and walking toward the animals, including the bears. Park rangers were constantly asking people to move back to safety, and we almost had to leave one location because people would not heed those warnings.

Don’t be the person who ruins it for everyone else or worse, the person who injures or is injured by a wild animal. It’s amazing to see these creatures in their natural environment, but when they grow too accustomed to humans they stop being cautious and get hurt. Let’s keep them safe, listen to the rangers, and enjoy them from afar!

Because we were far away, it might not be obvious what animals are featured in some of my pictures below. Here’s a key: 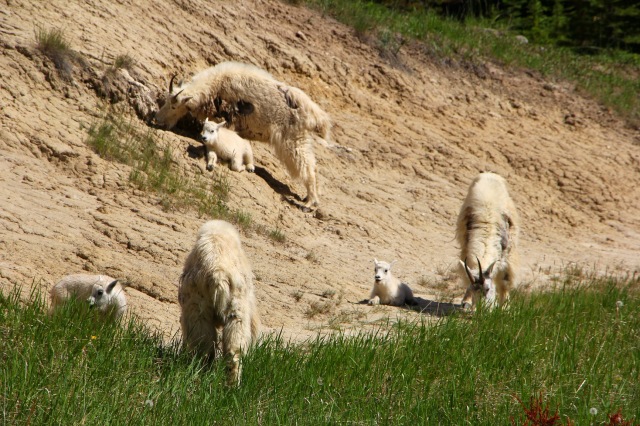 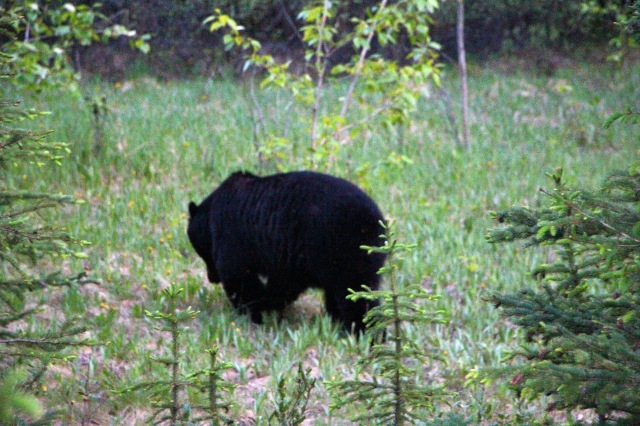 We spent an amazing day driving the Icefield Parkway and would recommend it to anyone headed to Banff or Jasper National Parks.

2 thoughts on “Driving the Icefields Parkway”