The weekend after my master’s degree classes ended (HOORAY!) we set out mid-morning for one of the longer bike-and-hikes we’ve tackled in a while. Our destination: Lake Serene.

By the time we arrived parking at the trailhead was scarce and I was glad we were on our bikes and able to sneak into an available spot that was too small for any cars. After storing our gear and organizing our things, we set off for a day in the mountains.

Despite other hikers’ online recommendations, we decided to hike Lake Serene first and then hike to Bridal Veil Falls on our way out.

Most people opt to do the falls and then Lake Serene, claiming that when you do the lake first you are too tired to follow through with doing the falls. I preferred our approach because if we didn’t feel up for the falls, we could always return and do that shorter hike another time. Spoiler alert: we ended up doing them both!

The first leg of the hike was reasonable both in terms of elevation gain as well as trail conditions. We made our way through the woods until we came to the split for the lake and falls, heading toward the trail on our left. 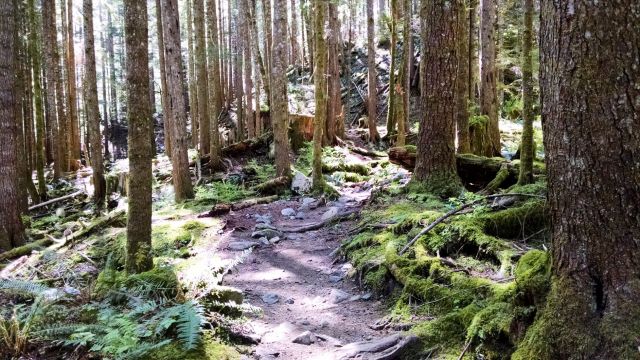 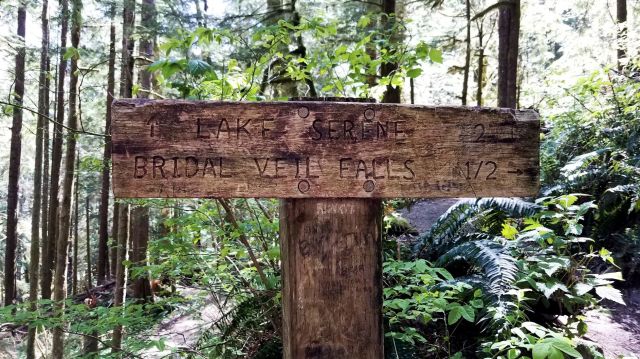 We quickly came to a small waterfall and pool where a number of people were taking pictures and resting on nearby logs– most of them having returned from Lake Serene. As we walked by and looked back down the trail, we could just spot Bridal Veil Falls in the distance. 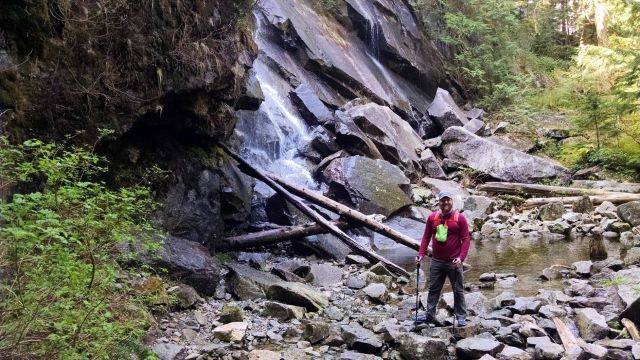 The middle leg of the hike was incredibly steep, and it felt like all we did was climb directly up! It wasn’t all in our heads–we climbed 1,300 feet over the course of 1.5 miles.

The trail wound through the trees and we had to navigate stairs, rocks, and tree roots–as well as multiple switchbacks–until we came to a clearing that gave us incredible views of the mountains ahead. It was the perfect motivation at the perfect time to push me over the finish line! 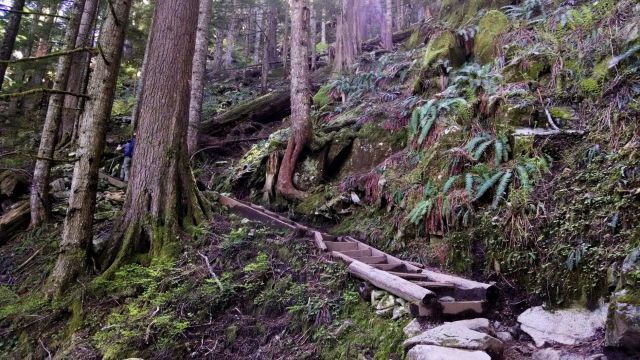 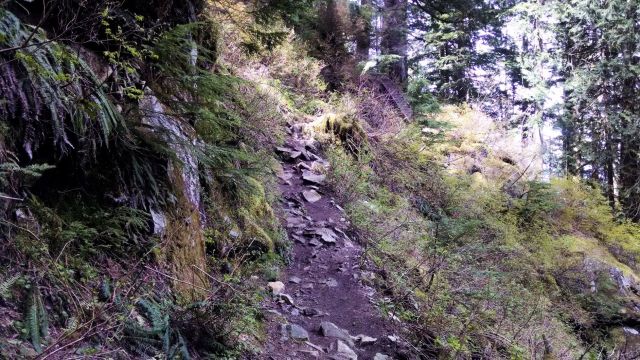 We entered the trees and crested a small hill that finally unveiled Lake Serene. We both said, ‘Oh, wow!’ out loud as soon as we saw it! It was absolutely amazing! Everyone else coming over that crest also had an audible response– you couldn’t help it!

The surrounding mountains still have snow and every once in a while you would hear the rumblings of small avalanches as the sun would melt the residual snow and cause it to give way. The lake had clearly been frozen and that ice was still in the process of melting as well, leaving a beautiful frozen pattern all across the water. 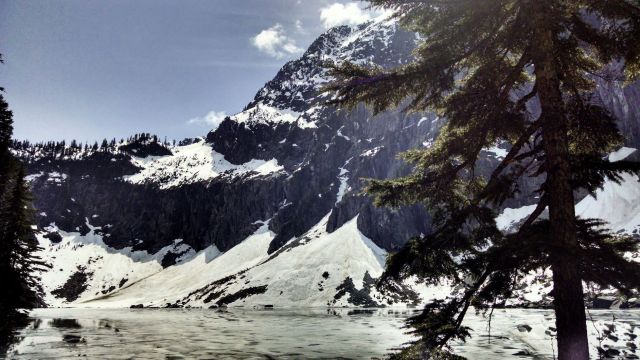 We took the trail along the lake and over a precarious bridge to a split where we were able to head away from the lake to nearby Valley Overlook. There was only one other person at the overlook–we had the views all to ourselves!

We were at the wrong time of day for the sun to light up our photos but the views were stunning nevertheless. We could make out the river and other bodies of water in the valley below.

After returning from the overlook we continued along Lake Serene to Lunch Rock. Everyone who was not at the overlook was here! The rock is huge and flat, descending down from the trail to the water.

People were sunbathing, having lunch, relaxing, and taking in the amazing views. The sky over the mountains was beginning to grow cloudy, but it just made the area seem even more dramatic.

We grabbed a seat, ate some trail mix and rehydrated for a while before packing up and preparing for our descent. 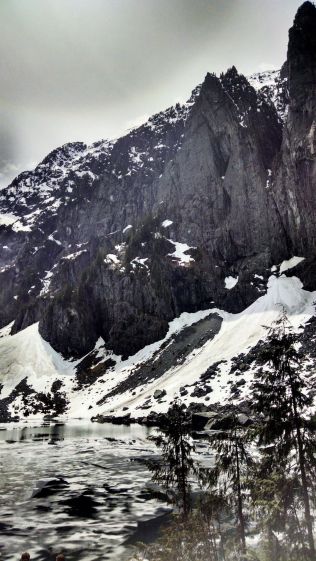 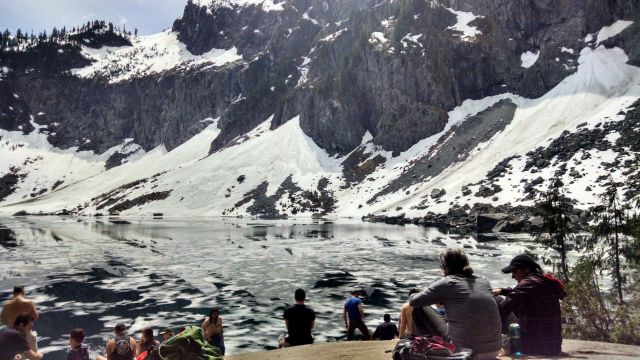 Before we left, I decided I might run to the ‘restroom’ indicated on a wooden board near where the trail crested and offered the views of the lake. We walked along a small path and came around a corner to the gem featured below.

It was out in the open and in complete, clear view of the trail! Ha! I decided I could make it back to the parking lot–Brian, of course, had to take a quick picture! 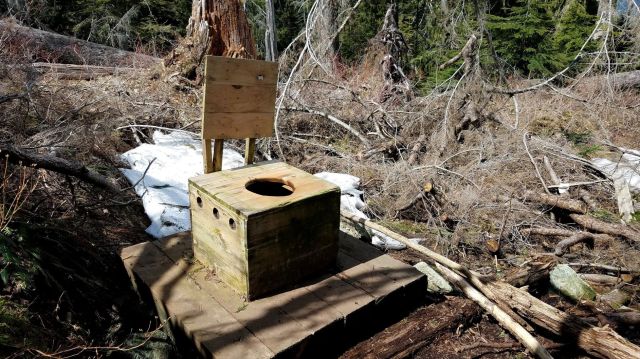 Descending is never easy on my knees but every other muscle in my body preferred it to the ascent! We passed so many people who weren’t sure they could finish and tried to offer them words of encouragements.

We finally made it back to the split where we needed to take the path to the right to ascend the half mile to Bridal Veil Falls. I will admit it–I didn’t feel up to it. I was really tired and my knees were absolutely shot. Brian talked me into it and while I had to stop and rest a few times, we did eventually make it.

The trail makes a loop at the falls so you can view it from below as well as a bit higher up. We checked out both areas before looping around and heading back out toward the trailhead. The falls are well worth doing as part of your Lake Serene hike or as a hike unto itself.

This hike was one of my favorites, mostly because I hadn’t looked up pictures ahead of time and had no idea what to expect. The lake was stunning and made the climb well worth it!

All in all we hiked 8.8 miles with 2,700+ feet of elevation gain. Great workout, great day outdoors, and GREAT to have free time again to explore more of this beautiful area!