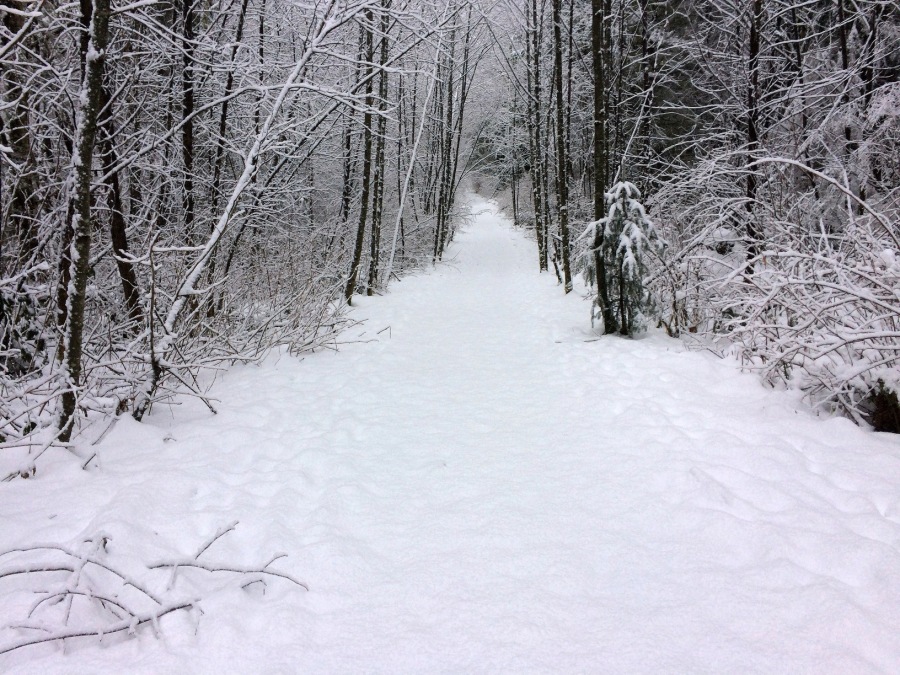 Although it’s not Brian’s preference, some weekends we opt for length over gain when it comes to selecting a hike.

That was the case when we landed on exploring the Lime Kiln Trail near Granite Falls. We ended up loving this snowy, seven-mile round-trip trek along an abandoned 1800s railway bed to a historic lime kiln.

Early Saturday morning we set out, arriving at the trail head around 7 a.m. just as the park was supposedly opening.

We must have been slightly early as the gate was still closed! Brian went out to investigate and found that it wasn’t locked so he swung it open and secured it so we could proceed to the parking area.

The road was snowy and icy, and we had to try twice to get up the small hill to park. We navigated into what appeared to be a spot near the trail signs as best we could without being able to make out the exact parking spaces, grabbed our poles, and set out with the trail all to ourselves!

The snow on the trail was untouched and the trees branches were beautifully encased in snow and ice. Everything was quiet and still as we made our way through the woods to a more rugged section of trail descending along the river.

There were a few small trees down and low hanging branches that were coated in snow and ice that we had to navigate around, but nothing that created too much difficulty. Clearly the Washington Trails Association had worked on the trail at some point as there were some well-built bridges and step-throughs in some of the larger trees crossing the trail. 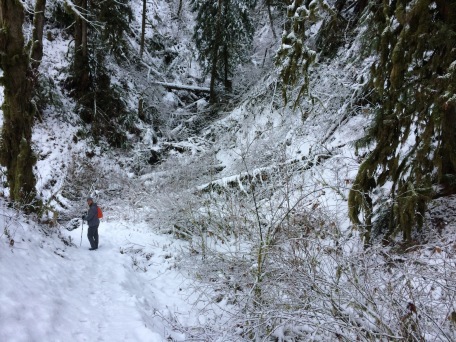 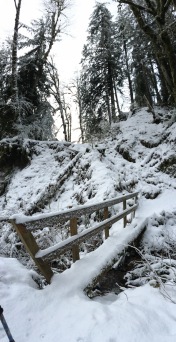 We eventually reached the lime kiln, a stone and mortar structure built around 1890 to transform limestone into lime for smelting operations in Everett up until the 1930s.

There were several artifacts lying around, including old saw blades, and you could still see the bricks and lime inside the chimney areas where they stoked the fire. The limestone was placed inside from above, but the structure that would have allowed them to do so is no longer there. Instead, you can walk all the way around, making out three different chimney areas. 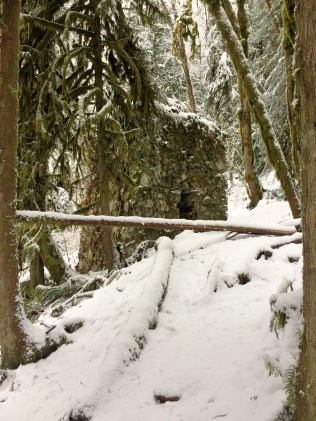 The trail actually extends past the lime kiln so we continued along the Stillaguamish river to complete the final leg. The temperature was warming, the snow was beginning to melt, and we were having to navigate a fair amount of water by the time we reached the end.

The trail concludes with a small loop that takes you to a relatively clear area where you can make out the remains of the railway bridge that spanned the river. While we were able to make it out this time of year, I’m not certain it would be visible once everything grows in during the spring and summer.

Our hike back was much less enjoyable for me as the rising temperature had transformed the trail into complete slush. There were also quite a few people hiking out as we were hiking back, and the multiplied feet trudging through the slush was making things slick. It was a fair amount of work making our way back up the 650+ foot climb to the main wooded trail and back to the car– I was cold but sweaty and ready for a coffee and our drive back home!

I loved the history of this hike and look forward to doing it again in the spring once the trees, plants and flowers have returned. It will be interesting to see what other artifacts become visible once the snow melts away! 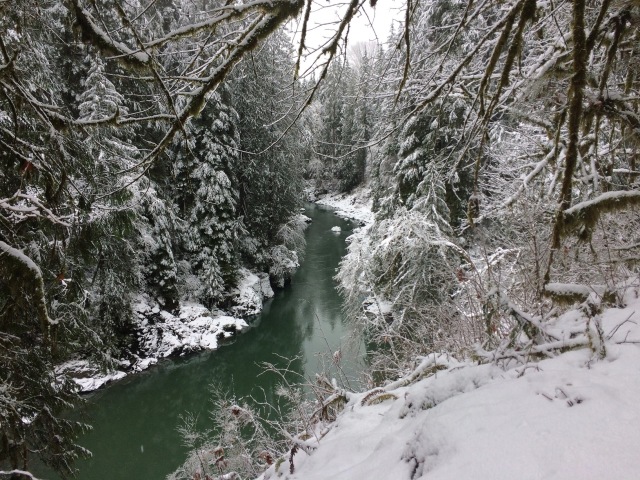 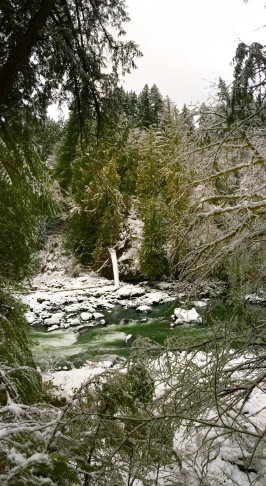