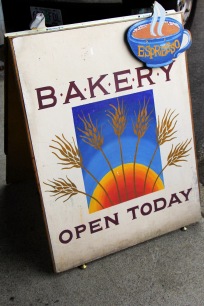 The second morning of our Labor Day weekend getaway in the North Cascades we woke up decently early, walked around Winthrop and then drove over to Twisp for breakfast.

I originally came across Twisp when I was looking for nearby quilt shops participating in the Row by Row patterns my mom was collecting.

Unfortunately the quilt shop in Twisp was closed for the holiday weekend, but my search had resulted in a few other things I thought we should check out.

We perused the baked goods while we decided on breakfast. I ordered an egg and cheese bagel sandwich with coffee while Brian ordered a breakfast burrito.

My bagel was molten hot to the point that most of the cheese had melted off the bagel and onto the wax paper wrapping. Brian’s burrito was good, but neither of us were blown away by the hot food.

We decided we should buy a few pastries to go, hoping that their baked goods were better than their hot food (they are a bakery, after all). Among our purchases were their namesake cinnamon “twisps”, which, as their name suggests, are twisted dough with sugar and cinnamon.

We collected our bag of goodies and dropped them off at the car so we could walk around downtown Twisp. 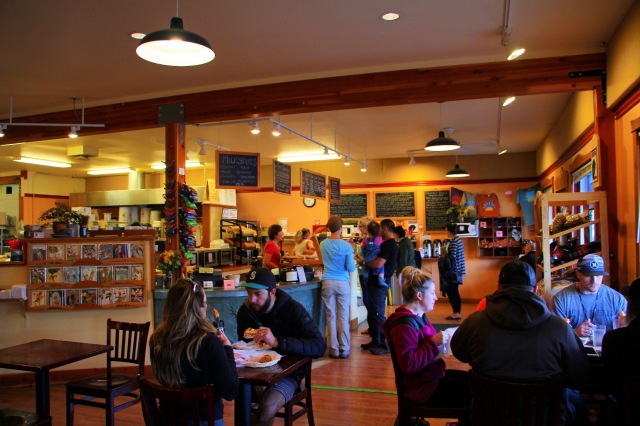 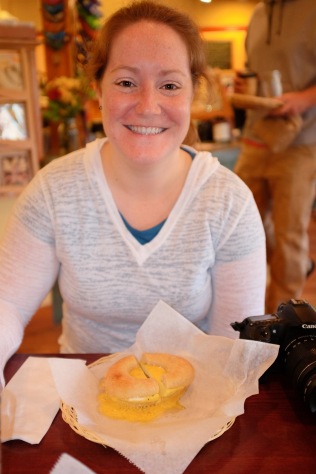 Just down the road from where we were parked was the North Glover Healing Center, which had a tree-lined yard just down from the road.

There weren’t many people or cars around, so we walked down the street toward the center, intending to turn left and head up to the main street.

As we got to the sign, Brian started whispering frantically at me to stop. Like an idiot, I turned to him and semi-shouted, “What’s the matter?” while he quietly but quickly gestured to my right.

I whirled around, and just a few yards away was a mule deer in the middle of the road! I immediately froze and then tried to slowly raise my camera to snap a few shots. She held still for a while, occasionally flicking her ear, and then headed back into the trees.

We slowly walked along the road toward her– she was making a bit of a ruckus, snapping tree branches as she settled into place– when we noticed some other moments. Two baby mule deer! The one was buried in the trees but the other froze along the trees while I snapped a couple of pictures before hustling into the trees.

My first time seeing mule deer, and it was fairly up close and personal!

We did finally leave the deer alone and headed back to the main street to walk around downtown. It was pretty quiet, even for a Sunday morning.

There were some interesting gardens, some wild west-inspired restaurants and shops, and even an interesting warehouse area.

It was much quieter and less touristy than Winthrop and a nice and nearby getaway.

After our time in downtown Twisp, we drove just outside of town to the North Cascades Smokejumper Base for a free tour. This ended up being one of our favorite stops in the Winthrop/Twisp area—it was awesome and we highly recommend it!

We arrived and although there were a few cars around the bunk houses, there didn’t seem to be anyone around. We walked around to an open lot where there were several buildings and an airplane.

We walked inside a smaller trailer and were greeted by a timid dog whose owner started shouting from the back, asking if we wanted a tour. We said we did, and as we followed his instructions to sign in, he announced over a loud speaker that someone on base needed to come give a tour.

Moments later guys were running top speed toward the trailer! The guy who got to us first ‘got’ to give us the tour– everyone else just caught there breathe and went back to whatever they were doing prior to the call.

Our guide was a young guy named Conner who was so nice. He took us through the different buildings, told us how we got into smoke jumping, and explained the training they go through.

It was so interesting and we had so many questions–believe it or not, this isn’t a thing in the midwest where we grew up, so the idea of guys jumping into mountainous wooded area to put out huge forest fires was quite novel.

Conner talked a lot about their gear. They sew their own suits– the sewing machine is right in the middle of the gear– so they are certain their suit is perfectly fitted and has all the accoutrements they want and need.

They have to pack their own suits and packs, which they have on these leaning racks that they can jump into in a matter of seconds prior to running to the plane when there’s a call.

They are so self-sufficient—in addition to sewing their own gear, they pack all of their own supplies. They jump with some supplies, while others are dropped from the plane and they have to go find them and pack them to wherever they are stationed.

They also pack their own shoots. At this base they still use the original round design of shoot, but many other bases in other states are using newer designs and the teams have to learn to jump with the new shoots.

Conner said there’s pretty strong feelings about the switch, especially among guys who have done this for years. This base sounds like one of the last holdouts, delaying making the switch as long as possible. 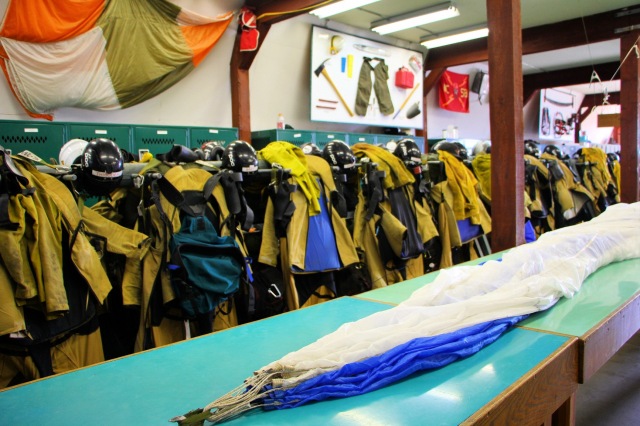 Our last stop on the tour was the plane. Conner took us on board and walked us step by step through what he experiences from the time they get the call to the moment he jumps out of the plane. I don’t think I could do this job, but it’s pretty incredible that they do it!

As we left the base it was getting closer to lunch so we pulled out one of our cinnamon twisps to share. Oh. my. gosh! Absolutely delicious. The baked goods completely redeemed our experience at the bakery, in particular the cinnamon twisp. If you’re in the area, you might find another place for a hot breakfast, but it’s worth going out of your way to the bakery for one of their fresh cinnamon twisps–and take a few to go!

Twisp wasn’t originally on my list, but it was a perfect morning trip and only a few minutes from Winthrop. I enjoyed walking around town, and we both really enjoyed the smoke jumper base and will be telling our friends and family to check it out the next time they are in the area. Ask for Conner! 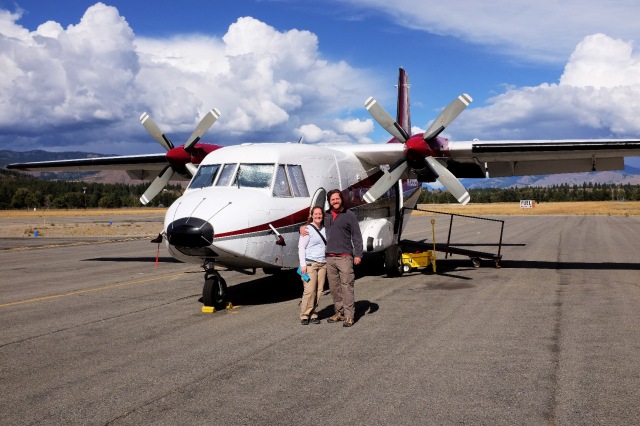 2 thoughts on “Things to Do in Twisp, Washington”