One of the first things I heard about when we moved to Washington was the abundance of beautiful, scenic byways throughout the state, and in particular, Chuckanut Drive.

When people would find out we lived in Lynnwood, they’d always ask if we’d spent a day exploring that route. Several of my work colleagues recommended it and couldn’t believe we’d been living here a year without having checked it out.

I couldn’t believe it either, but the timing never seemed right. I was looking for that perfect lazy Saturday or Sunday so we wouldn’t feel rushed and could just meander without a schedule. Thanks to work schedules, weekend plans and weather, we just hadn’t been able to make the trip.

We finally had a weekend without plans–my husband’s favorite kind of weekend. The weather was beautiful, we were both hoping to relax and put the work week behind us, and it seemed like the perfect time to finally spend a day on Chuckanut Drive.

Originally I thought we would leave early and return early, but after looking up a few of the places we wanted to stop, it became quickly apparent that nothing opened until 11 a.m. so this was going to be more of an afternoon activity. We ate a late breakfast and left around 11 a.m., stopping off in Arlington and Mount Vernon to pick up some Row by Row quilt patterns for my mom before making our way just north of Burlington to route 11/Chuckanut Drive.

Our first stop was in Bow-Edison just a few miles after we were en route. My colleague said it was a cute, funky artist community, and that’s exactly how I would describe it! The town is tiny but we managed to find parking and then spent a little time walking around, popping in and out of the shops. Modern art is pretty much lost on us but we did check out the local gallery.

I bought some local sea salt, Brian bought a nice piece of walnut in a woodworker’s scrap pile, and we both went in for some baked goods from Breadfarm, including a black olive baguette, fig bar, coconut macaroon and pear tart for the road. 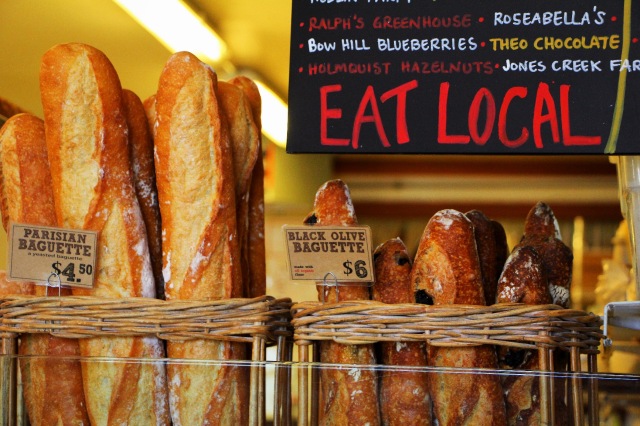 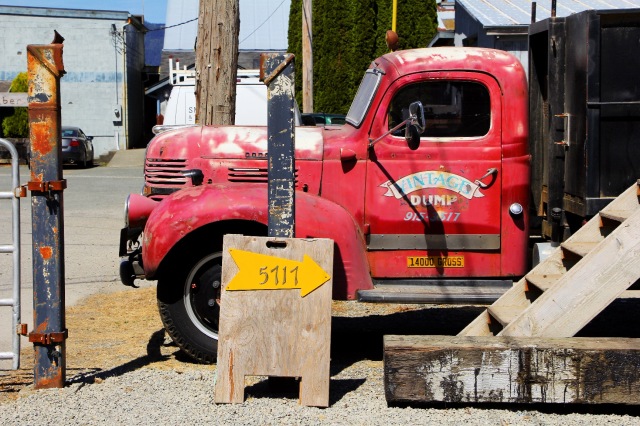 We hopped back on Chuckanut and headed slowly north, passing a bison farm and several fruit farms as we approached the coast. There were tons of bikes on the road thanks to a huge race from Seattle to Vancouver so what would have typically been a slow drive became infinitely slower as we all wound up and around the curvy and narrow road toward Bellingham.

It was early afternoon and we were starving so we pulled off at the Oyster Bar for lunch. It was pretty warm outside but we grabbed a perfect little table for two in the shade outside on the back deck overlooking the water.

It was gorgeous outside and we ended up there for quite a while, eating oysters on the half shell (including Wildcat Cove, which we hadn’t tried before–they were delicious!) and some small plates. Brian had a crab roll, and I had an asparagus gnocchi dish that was really tasty. 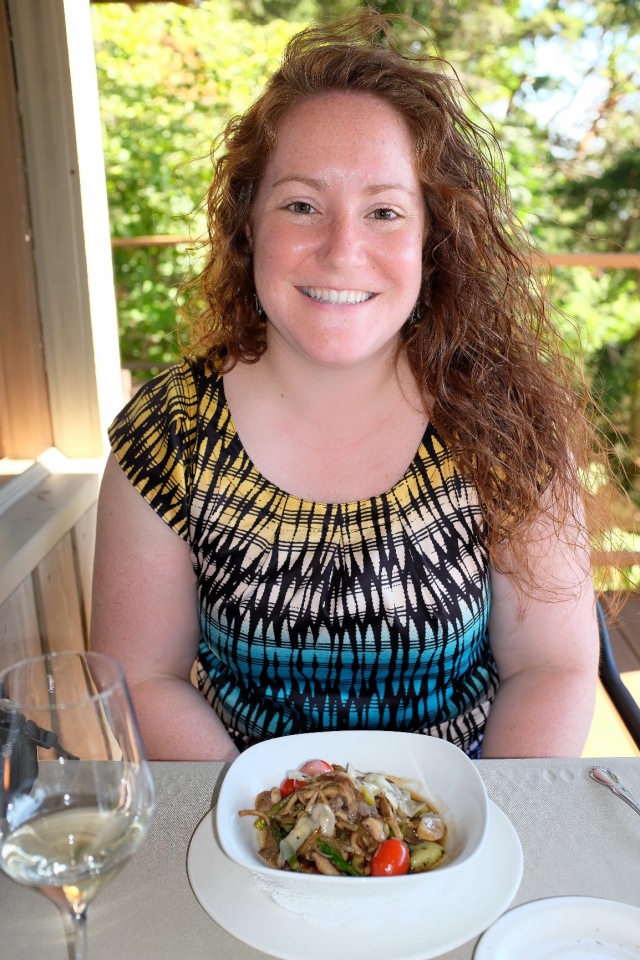 Despite having eaten an incredible lunch, we did stop at Taylor Shellfish Farms to see what it’s all about.

Several people had recommended we grab lunch there, but we didn’t quite know how it worked and we weren’t really interested in grilling or sitting out in the sun given the heat.

I think we made the right choice for our day, but we both agreed it would be awesome to go back for a late lunch or early dinner. There were tons of people with buckets of oysters just going to town–some eating them on the half shell, some grilling them on the charcoal grills around the seating area.

It would be awesome to bring friends and just sit out back, looking out over the water, eating seafood. Definitely on our list for next time! 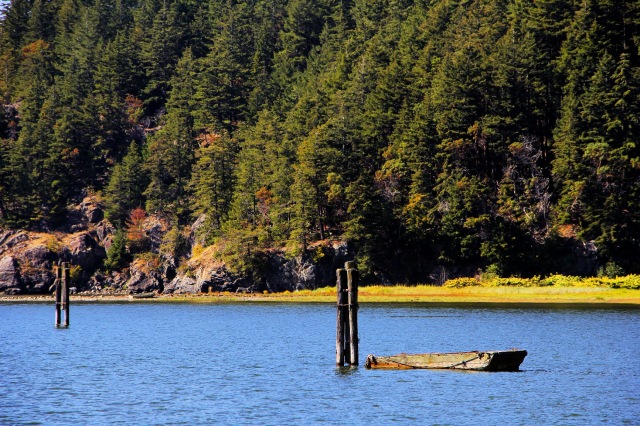 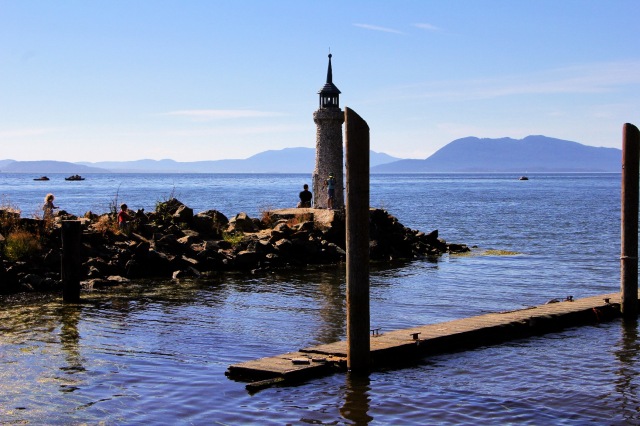 Our last official stop along the coat was at Larrabee State Park. Before we arrived we came across an awesome viewpoint and pulled over to take a few photos. It was a huge rest stop for all of the cyclists, and I ended up taking pictures of several couples overlooking the water and mountains.

I finished my photos and went in search of Brian, only to find him chatting with one of the cyclists. He makes friends wherever he goes so it didn’t really surprise me, until I found out they were contemplating loading his bike into my car so we could take him to Bellingham!

In my husband’s defense, he told the cyclist I’m pretty particular about my car and might not want a greasy bike in the backseat–that he would have to ask me before agreeing to anything. In the cyclist’s defense, he wasn’t even half way to Vancouver and the chain on his bike was broken beyond roadside repair, and he really needed help getting to a bike shop in Bellingham.

What was I to do? We were heading to Bellingham via one final stop, so I helped them grab some doggie bags to wrap the greasy parts of the bike and we loaded him and the bike in the back and prepared to set off. Just as I was about to pull onto the road, he got a phone call from a friend who was not far away and could take him to the shop. He thanked us, we unloaded the bike, and each of us went our separate ways. We were happy to help, but thankfully his help was already on the way!

After our adventure we made it to Larabee, which was pretty busy. We didn’t spend a lot of time exploring the campgrounds or trails given it was a little later in the afternoon, but we did walk one of the paths down to the beach where tons of families were in the water. A few boats and kayaks went by, and it looked like a great place to set up a tent and spend an afternoon swimming and playing in the water. 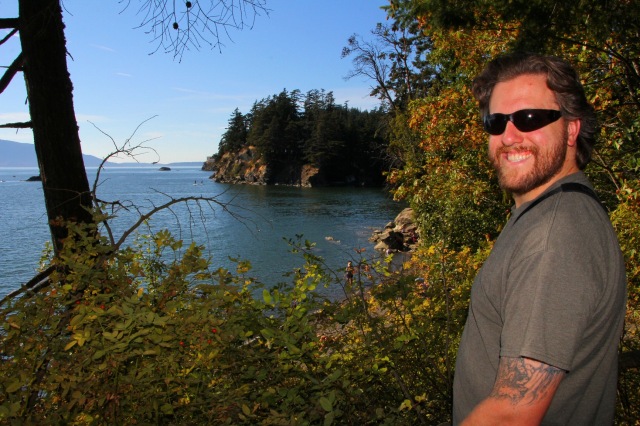 We were near the end of Chuckanut Drive so we wrapped up by heading into Bellingham to check out a couple of breweries my friend recommended. I appreciated Brian giving up a free Saturday to accompany me on this adventure– the least I could do was take him to a couple of new local microbreweries!

Our first stop was Boundary Bay Brewery, which was packed. There were tons of people waiting for seats in the dining areas, both inside and out, and we lucked out grabbing a couple seats in the bar area, which was 21 and over. Brian picked a medley of IPAs, their specialty, and I taste tested a few, but those aren’t usually my favorite.

Afterward we walked a few blocks to Asland Brewing, which had a very different setup. There was some in and outdoor seating for people getting food, and there was also an outdoor beer garden on the side of the building where people could take their samplers and hang out. We lucked out again with a couple stools in the bar area, and I tasted a few more of Brian’s sampler. These were very different brews, and I was particularly intrigued by the pale ale and weisse.

We walked back to the car, loaded up and set out for home as the sun was starting to set. It was a perfect day to finally explore Chuckanut Drive– the weather was perfect, we didn’t have a timeline or agenda, and we got to check out some of the more obvious stops along the way. I look forward to exploring some of the hiking and lesser known viewpoints next time, or even doing the trip on our motorcycles for a different perspective. 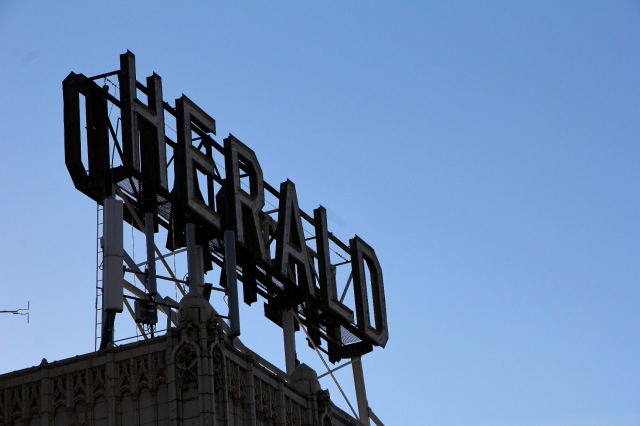 2 thoughts on “Things to Do on Chuckanut Drive”