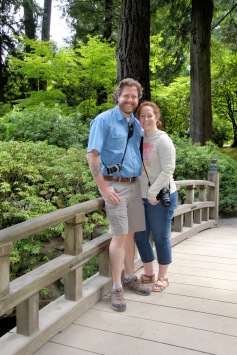 After an incredible day exploring the Columbia River Gorge we were excited for our Sunday Funday in Portland.

Brian and I were just there a month or so ago for a quick weekend getaway as part of a world record attempt for the most red heads in one place (it was fun but not a successful attempt) so we had seen some of the common sights downtown that my parents still had on their list.

Since we had his car and my parents would be without the rest of their stay, we decided to do a few things a little ways outside downtown that were easier to do by car and that none of us had done, primarily up in Hillside/Arlington Heights.

We set off early and decided since we had introduced my parents to Voodoo Doughnut the day before, which is known for its unusual and eclectic donuts, it was only right to have them taste Blue Star Donuts, which offers gourmet, brioche-style donuts.

For those concerned about our health, two days of doughnuts is more doughnuts than any of has had in the past six months, but you can’t go to Portland and not try Voodoo and Blue Star. When in Rome!

We grabbed our coffee and donuts to go and drove to the International Rose Test Garden where we found awesome parking right in front of the garden entrance. We grabbed a nearby picnic table, cut our donuts into quarters so we could share (my favorite was the blueberry bourbon basil, followed closely by the lemon poppyseed buttermilk–YUM) and enjoyed our breakfast before heading in to see the flowers.

The garden is almost 100 years old and has about 200 varieties of test roses! The rows have plenty of room in between so you can wander in and out in between the different types, which are all labeled with clever names.

In addition to the main gardens there is a miniature rose test garden and a Shakespeare rose test garden. There weren’t too many people there at first but it was pretty busy after a couple hours as we were heading back out. My favorite varieties were the ones that were dark purple–I didn’t know there was such a rose, let alone several varieties of different sizes, leaf styles, heights, petal styles, aromas, etc. Developing all of these varieties is clearly an art, and I really enjoyed roaming around and looking at everything. 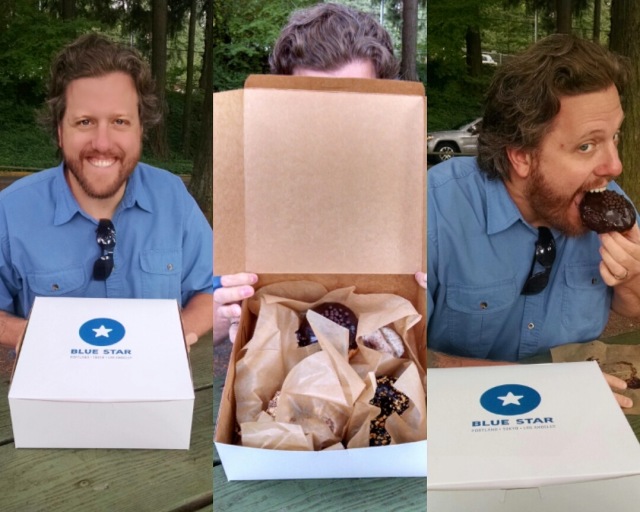 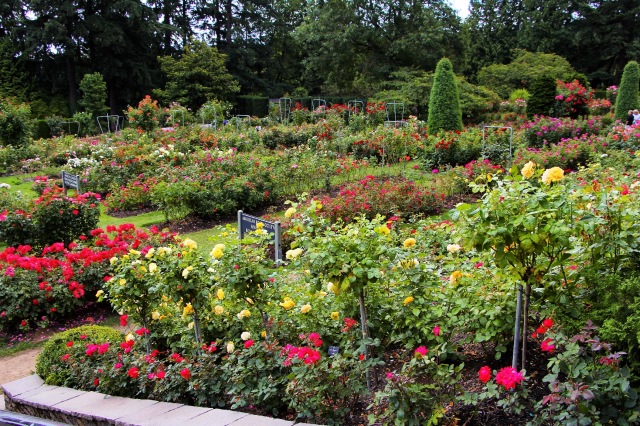 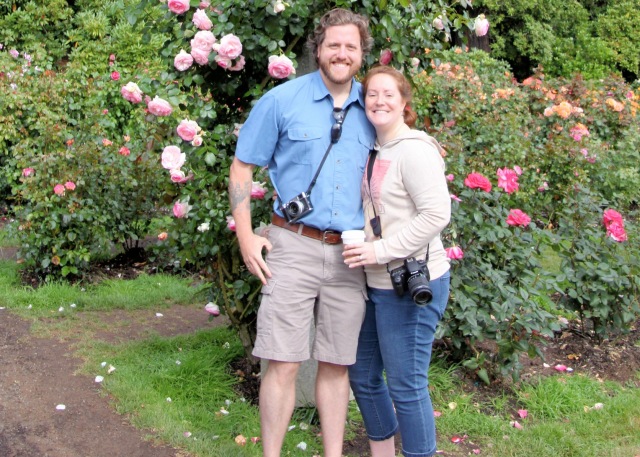 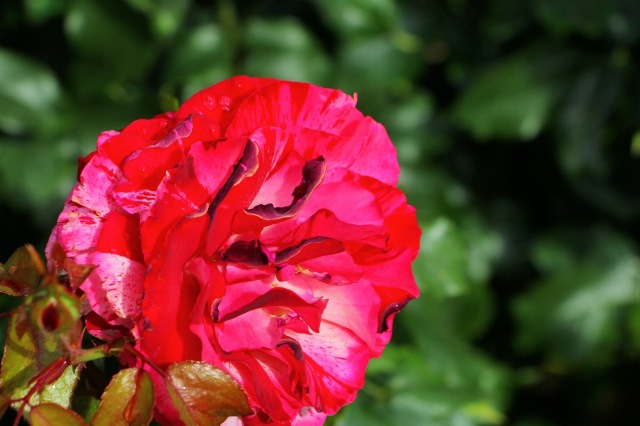 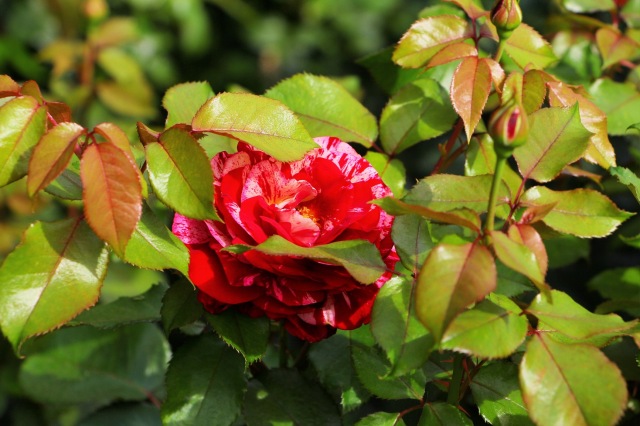 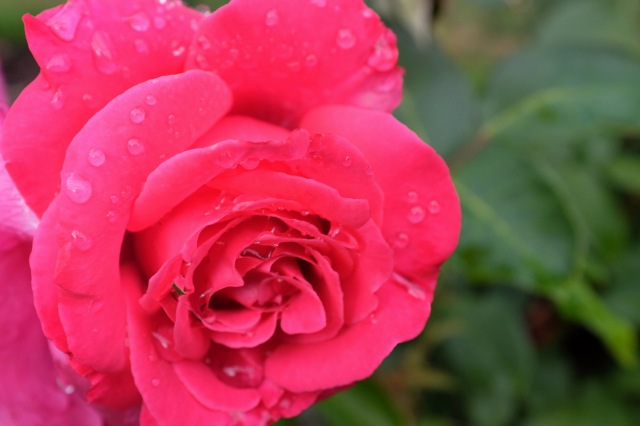 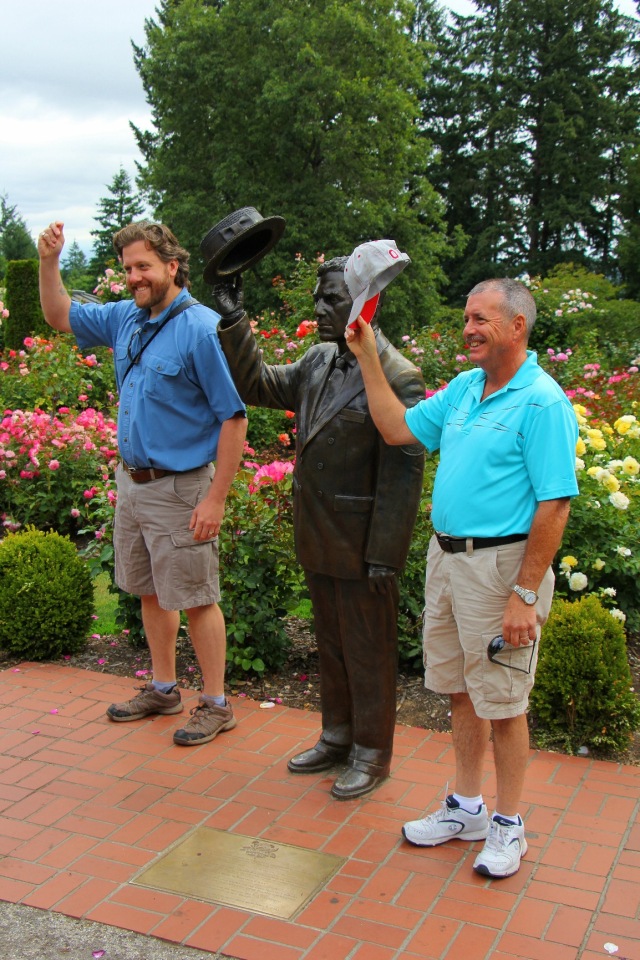 After we’d had our fill of roses we walked up the hill to the Portland Japanese Garden, which several people had recommended.

The entrance and parking area are under construction but we were able to add money to our parking meter, climb up a stairwell through the woods to the entryway and enter without any issues.

I really enjoyed the Japanese garden–I love all of the moss and stone and find the thoughtful designs soothing and relaxing. The stone sculptures, waterfalls and koi ponds were beautiful.

It wasn’t a huge garden, but I enjoyed strolling around the different areas–it was very peaceful. I could see having a backyard set up in that manner–I think it would be incredible to wake up and enjoy some tea or coffee while taking it all in. 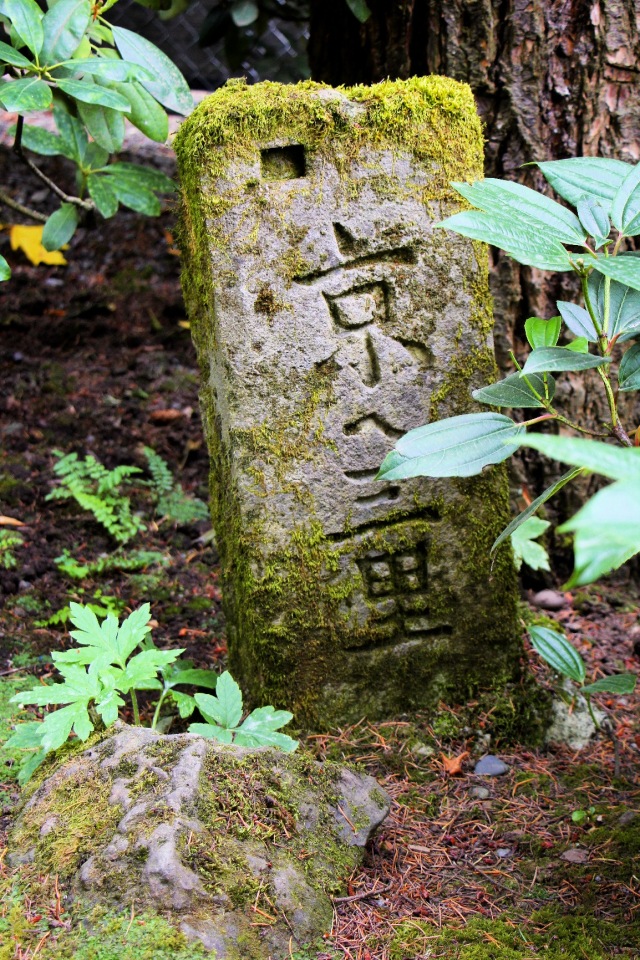 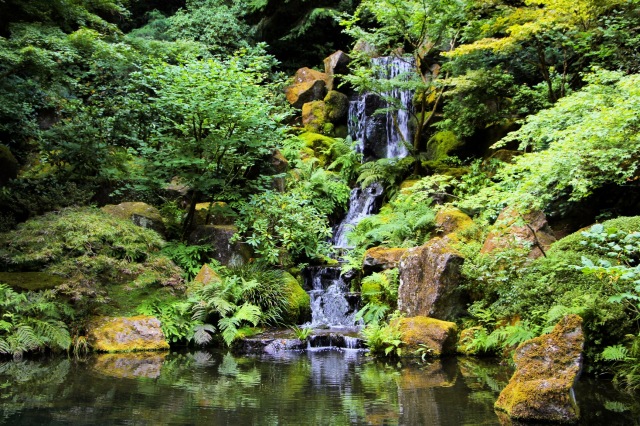 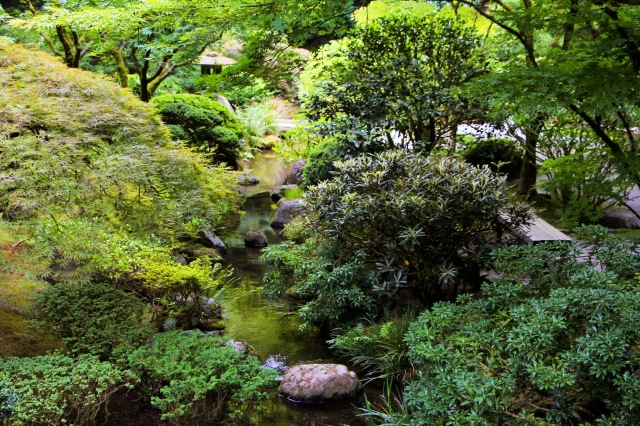 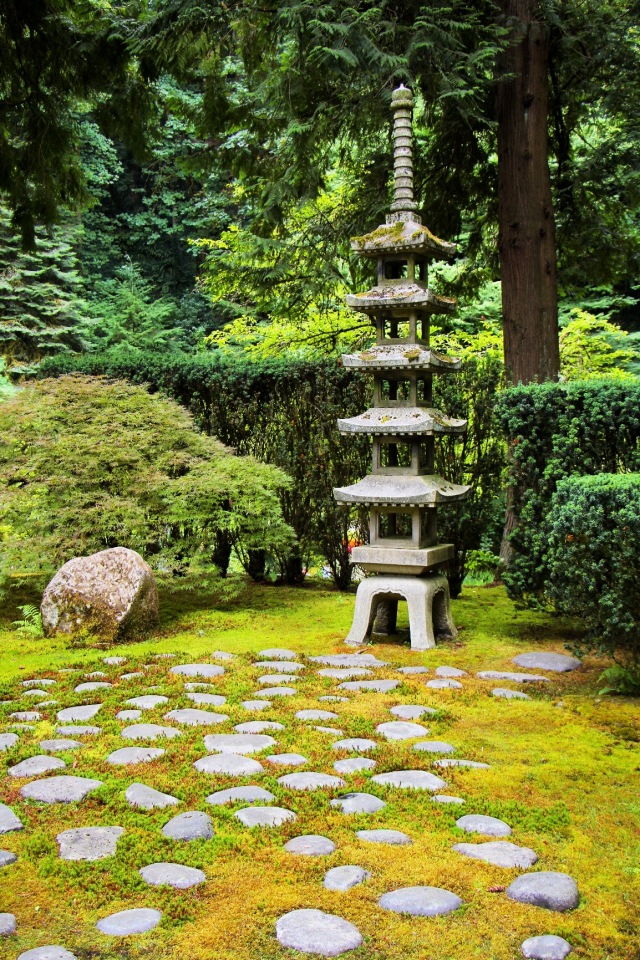 We headed back down to our car and drove around to Pittock Mansion, our final late morning stop in the area. It was also getting busy when we arrived, but we were able to get in and start our self-guided tour without having to wait.

As the materials describe:

Built in 1914 for one of Oregon’s first and most influential families, Pittock Mansion overlooks the city’s skyline–and is the perfect place to learn how Portland became what it is today.

It reminded me of a few other mansions we’ve toured that were constructed about the same time and with amenities that were well ahead of the time, like Stan Hywet Hall and Garden. These great houses are incredible, and I’m always most impressed and jealous of the beautiful libraries–this home was no different. I loved the formal library with all of its beautiful woodwork, including the carving of the family’s coat of arms above the fireplace.

We were able to see all of the bedrooms, bathrooms (which were crazy ahead of their time– I wouldn’t mind having one of their showers today!), kitchen and more. We were also able to explore the small house next door where one of the staff members lived with his family. The grounds are pretty and have a beautiful view over all of Portland. 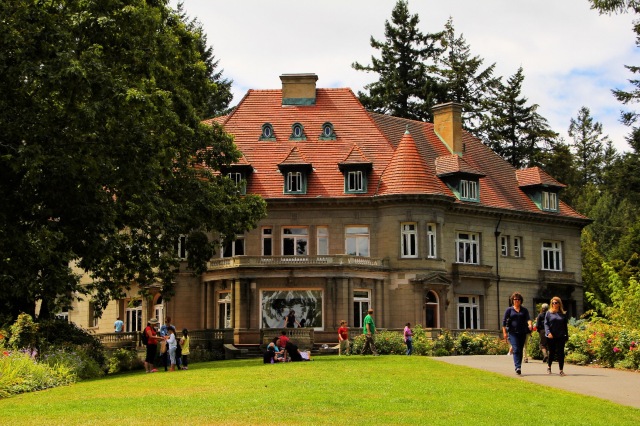 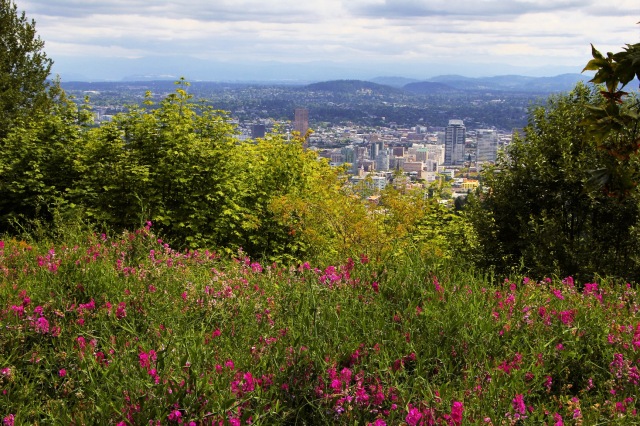 It was early afternoon when we finished and having sufficiently walked off our breakfast, we headed across town to a Thai restaurant Brian and I had missed last time and really wanted to try called Pok Pok.

My boss had recommended it to us the last time we came to Portland, and then my mom read about it when she was researching things to do leading up to their trip. They had never tried Thai food before (!!!) and wanted to give it a shot! All signs seemed to be pointing to our going there, so we went!

Somehow we hit the timing right and were quickly seated, but unfortunately things went a bit downhill from there. Our waiter lost our order and didn’t realize it for some time– when he finally came back to ask us to give it again, we’d already been there more than half an hour. We ordered again, and he brought us some shrimp chips to tide us over–what could we do? We ate those and were very happy when our food finally arrived.

My parents ordered Ike’s Vietnamese Fish Sauce Wings for us to share, which were delicious, and a shrimp and pork belly dish with sticky rice for themselves. Brian and I ordered the Muu Paa Kham Waan, which is a spicy boar collar meat dish with a chili/lime/garlic sauce that was also very good. The waiter warned us it was pretty spicy and when it came out with a side of mustard greens on ice I got a little nervous. I love spicy food but thought maybe we were about to be blown away, however neither of us thought it was very hot. It was good, just not spicy!

Afterward we walked down the street for some dessert at Salt and Straw, which is the Jeni’s splendid ice cream of Portland and very good. I had half scoops of the caramel corn on the cob and the pear and blue cheese (the former was good, the latter was amazing) and Brian tried the zucchini bread with chocolate freckles (ok) and green fennel and maple (good). My parents really enjoyed their flavors as well.

It was about 3 p.m. by the time we headed back to the hotel to drop off my parents before hitting the road for Seattle. It was another wonderful weekend, but it was nice coming home to Seppy. See you next time, Portland! 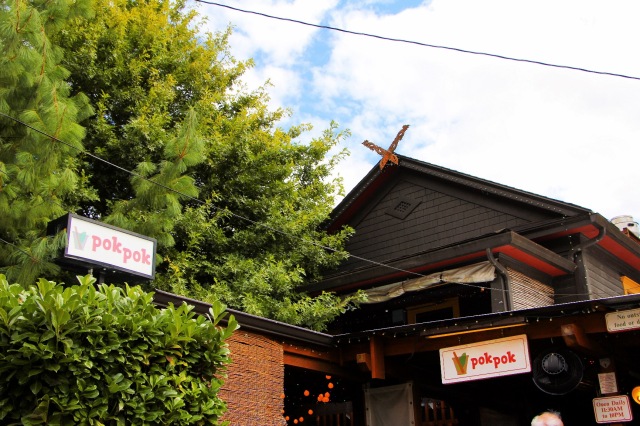 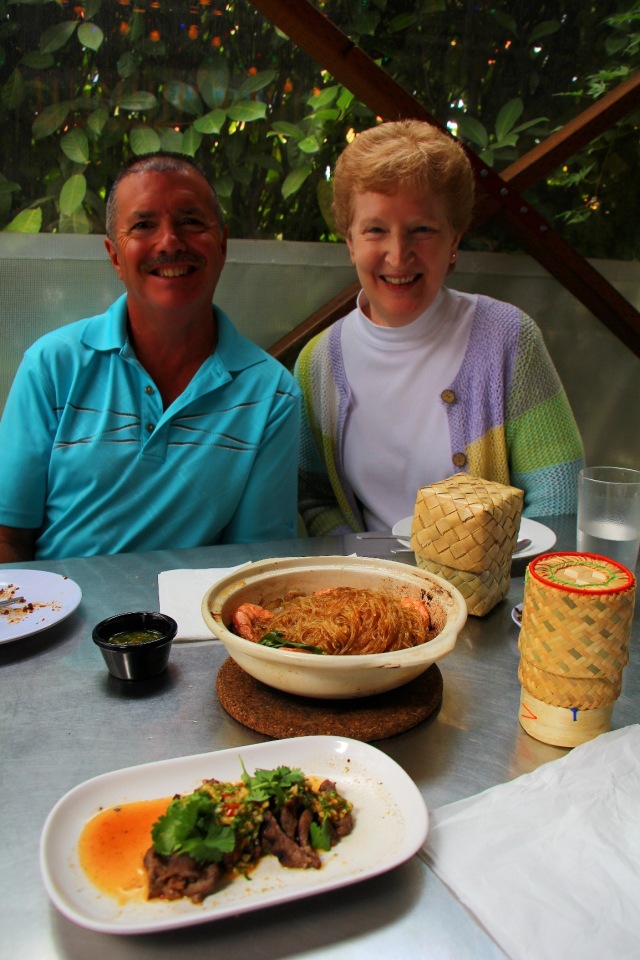 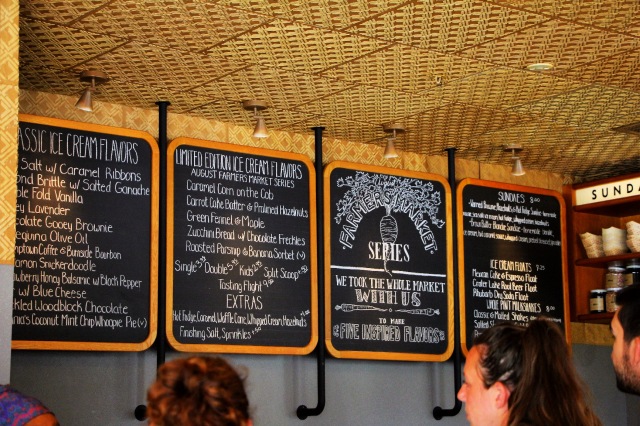 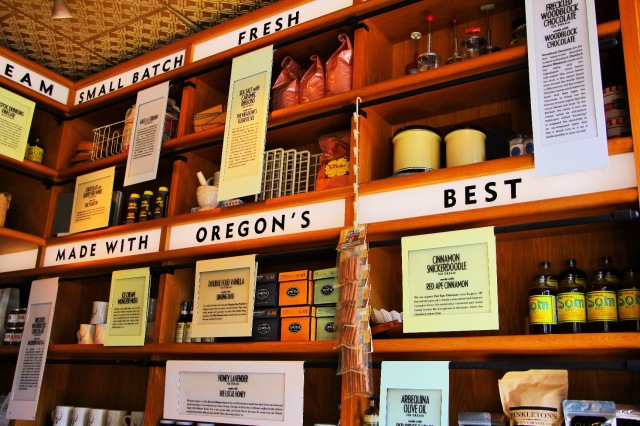 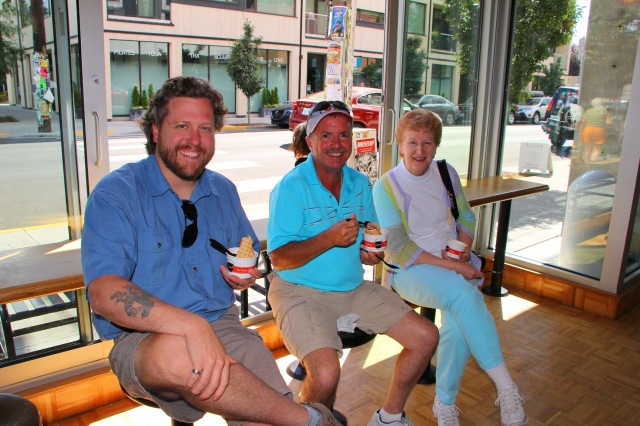 2 thoughts on “Portland with My Parents”