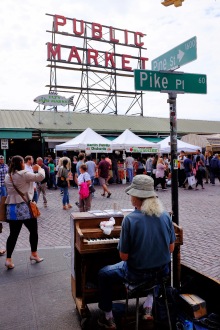 My cousin has been interning at HP this summer, living in Corvallis, Ore., and exploring quite a bit of the state. Brian was able to meet up with him when he first moved out while visiting a customer near Eugene, but I hadn’t been able to connect with him and was afraid I would miss the chance by the time he needed to get back to RIT for another school year.

Luckily things did work out for us to connect on the West Coast! His hosts had weekend plans at the University of Washington so he called to say he planned to catch a ride with them. They were only going to be here for part of a weekend, giving him less than 24 hours to experience downtown Seattle.

Naturally he asked us what he should do, and naturally I immediately had a list of things that clearly exceeded what could be accomplished in that short amount of time.

After narrowing it down and accounting for his interests, we decided to take him on a whirlwind tour of a few downtown highlights so he would at least feel like he’d had a taste of what Seattle has to offer.

We met him at the University of Washington at 1 p.m. shortly after they arrived in town and drove down to park near Westlake Center, which is a nice hub for reaching several local points of interest. Seattle Center seemed like a good place to start so we hopped on the historic Monorail and made our way north.

Seattle Center was hopping–I had failed to note it was Bite of Seattle this weekend! We took in the Space Needle and International Fountain but were a little overwhelmed by the number of people. None of us are much for crowds so we grabbed some fried alligator on a stick (yummy!) and a Mexican corn dog to go and took a slightly less crowded Monorail back to Westlake Center. 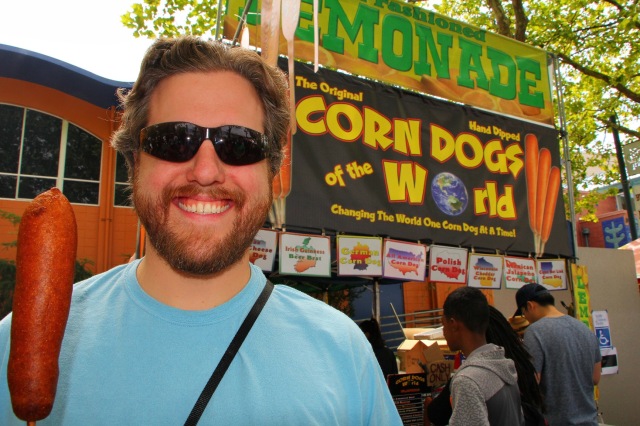 Our next step was also (unsurprisingly) bustling with energy — Pike Place Market! We had brought along a cooler so we wandered the stalls filling our bags with items to take home and make for dinner. We ended up with:

The guys stopped to taste test some jellies and other goodies along the way, and we also made friends with a street performer entertaining a line of people in Post Alley waiting to get into Copacabana Cafe. She was playing the accordion and singing, and was really good! 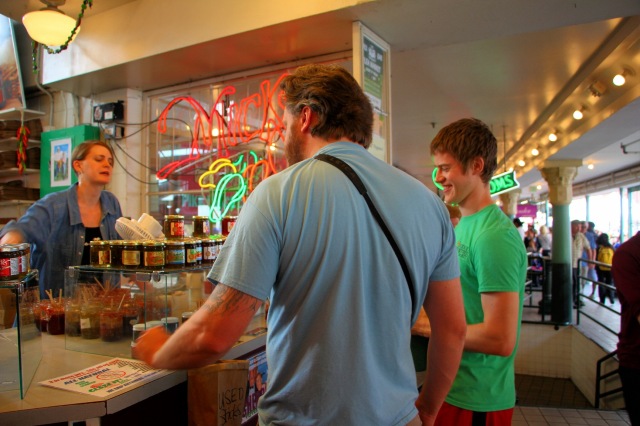 We dropped our purchases off at the car and then headed down by the gum wall before taking a walk south to Columbia Tower. As much as there is to see at street level, I was also trying to take in some of the nearby buildings. The architecture is really interesting, and one art deco-ish building really caught my eye. (I, in turn, caught it on my camera.)

While we got a good look at the Space Needle, it was a little cloudy and none of us were willing to pay to fight the crowds to get to the top. The sky had cleared up a bit while we were shopping at the market, so we thought we would check out the Columbia Tower Sky View Observatory, which Brian and I actually hadn’t done yet.

If the sights and information about what you’re seeing aren’t enough, there’s also a little bar/cafe so you can grab a drink or bite to eat and just relax and enjoy the view.

If you’re in Seattle and the weather is cooperating, it has to go on your list. I loved looking out over the Sound toward the Olympic Mountains–it was truly breathtaking.

After we saw our fill, we walked back to the car and took a turn through Fremont on our way back to Lynnwood.

It was late afternoon so most shops were closed or closing, but it was still fun to walk around. We parked on a nearby side street and made our way to the Fremont Troll and then downtown to check out the self-guided walking tour.

We’ve been to Fremont several times and always see the different sculptures, etc., but I didn’t realize there was a mobile app/printed handout to guide you through all of the public art on display with history and information about how it ended up in Fremont!

I was particularly fascinated by the story behind the Statue of Vladimir Lenin as well as the Fremont Rocket. We didn’t make it around to all of them– we were getting hungry and ready to cook up our market fare for dinner.

We did make a quick stop on the way to the car at Pie to get a couple small dessert pies for later. Brian (unsurprisingly) got a cherry pie and I got a salted caramel apple. They were both delicious–I would love to go back later this fall or at Christmas time to try some of the seasonal dessert pies, like pumpkin chai spice, sweet potato, gingerbread cream, or eggnog cream. YUM!

It was a busy half-day, but we hit quite a few quintessential Seattle landmarks and definitely gave my cousin a taste of the city. 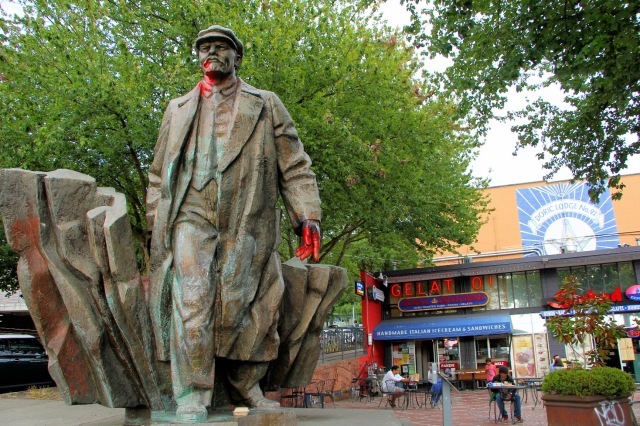 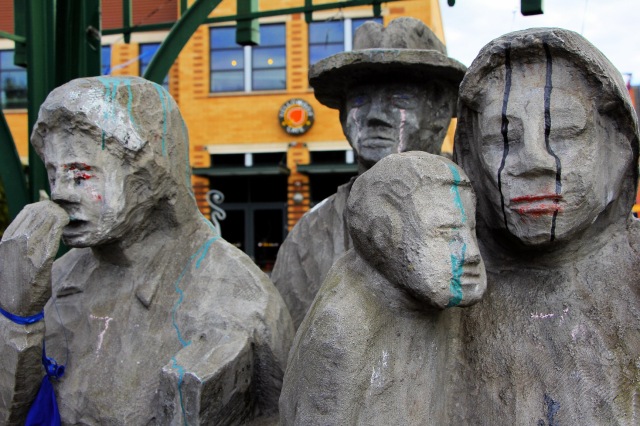 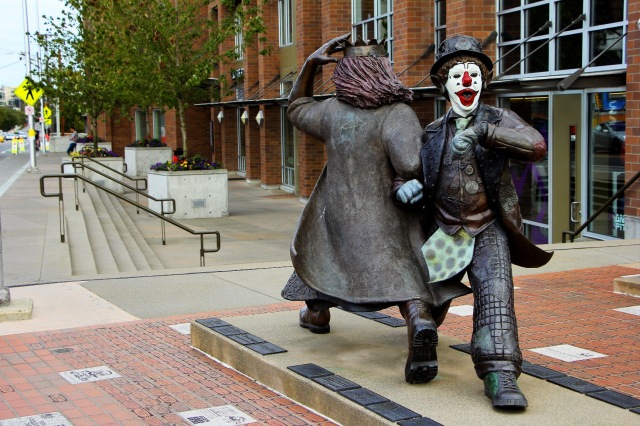