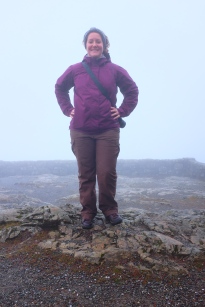 Long before we moved to the Pacific Northwest friends were telling us we needed to check out the San Juan Islands off the coast of Washington.

Right before the holidays I came across something online about winter getaway deals for the islands– they obviously get tons of traffic during the summer, but many places offer specials to encourage tourism during the off-season as well.

Neither of us has much time off at work so we decided to plan our getaway around a holiday weekend. I looked through all of the deals and landed on one through the Orcas Hotel on Orcas Island. Since we only had a couple days we decided we would stay on Orcas and save the other islands for future adventures.

We drove up to Anacortes early on Saturday morning to catch our ferry. I had booked a 10 a.m. spot so we would be on the island by 11 a.m., but the traffic was light and we made it much faster than I anticipated–fast enough to sneak on the 9 a.m. ferry and get there by 10 a.m.!

The ride was smooth and I enjoyed looking out the giant windows on the middle deck while Brian went out on the bow to take pictures. I liked seeing some of the homes on the other islands when we got closer to shore as we passed in between the bodies of land. 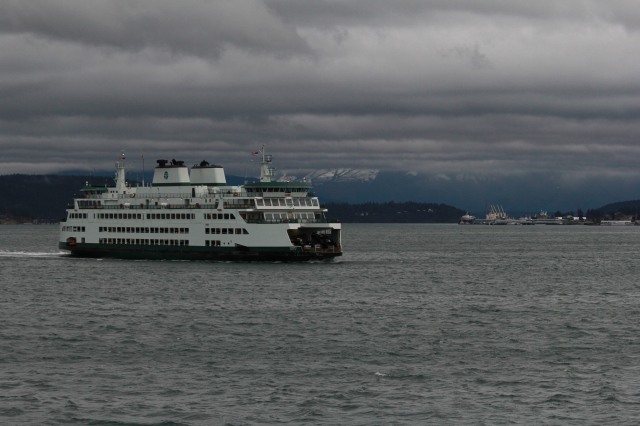 We got to Orcas and were able to quickly park and check in at our hotel. It was a B&B, which isn’t really Brian’s thing, but the owner sat us down over coffee and made us notes on a map about the best places to hike. From there we dropped our stuff in the room and set off for Moran State Park.

Going there first was a nice way to orient ourselves from the ferry dock/our hotel to Eastsound and then over to the other side of the island. The weather was cloudy and misty but with a 90 percent chance of rain all weekend, it seemed like any time was probably a good time to tackle our list of things to do!

We bought a park pass and drove as far as we could before parking and hiking the 3.6-mile loop up to the top of Mt. Constitution. As we ascended it got colder and there was a fair amount of snow and ice when we got to 2,409 feet.

We also couldn’t see a thing! We were smack in the middle of a cloud! Supposedly the peak has incredible 360 degree views of Puget Sound, the island, Canada and the Olympic Mountains. This is what we saw: 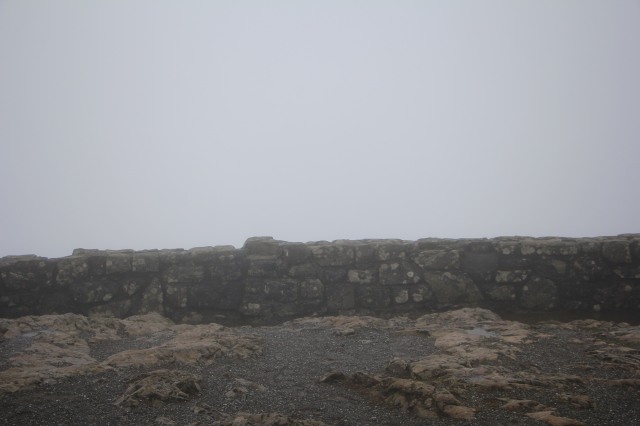 Ha! Despite our non-existent views we enjoyed the peak along with a few other brave souls and then made our way back down.

This stop was definitely about the journey, which looked a little something like this: 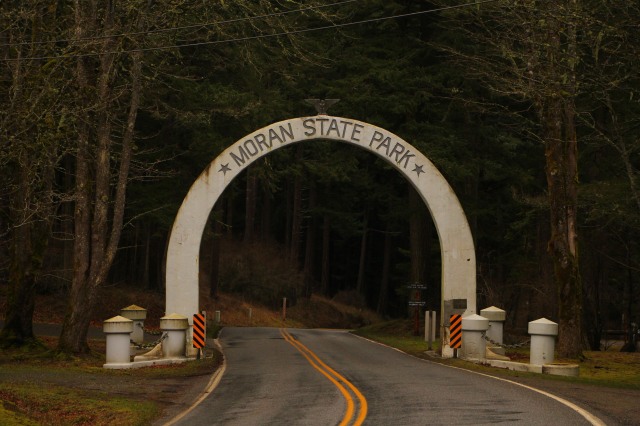 We were starving by the time we got back to the car so we drove to Eastsound for a bite at Cafe Olga on the recommendation of one of Brian’s customers. We got the scalibut sandwich and it was AMAZING–go there and eat it right now!

After lunch we headed back into the park to hike to Cascade Falls. There were several different falls in one area but we were running out of daylight so we just picked one. It wasn’t the best falls we’ve seen, but it was an easy hike, you could go around to both the bottom and the top, and Brian got this nice long exposure shot: 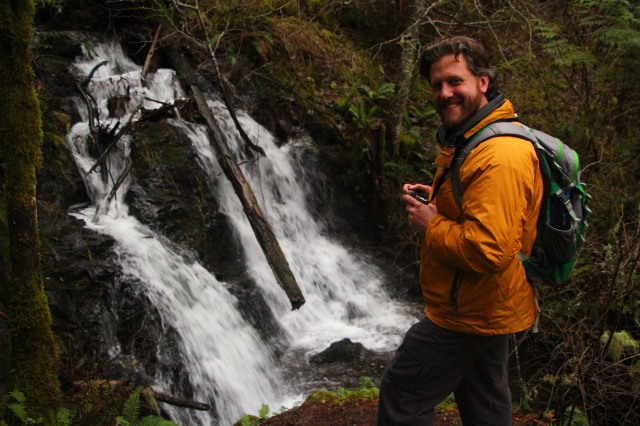 It was too dark to continue in the parks and too early for dinner so we watched the sun set and then decided to check out Island Hoppin’ Brewery. The place was small and packed, but it gave it a really great vibe. We sat at the bar and ordered a sampler, which I let Brian handle, and I ended up with the task of writing a new tag for one of the taps that ran out.

I had a cranberry cider that was awesome–I have to try to find it at home. 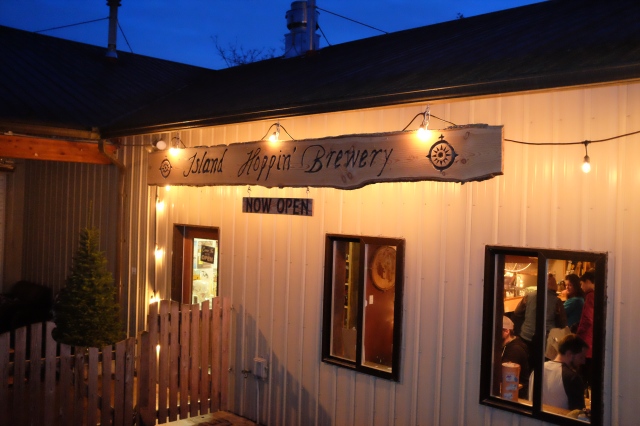 After drinks I drove us to dinner– sort of. The drive ended up being the most interesting and frustrating point of our weekend because it was dark and we had no idea where we were going. The streets have only been named for a few years and even the main ones don’t have lights– it was pitch black. We couldn’t see a road sign until we were on top of it.

We were both at our wits end– Brian had called the restaurant three different times to get directions from where we were, and we almost called it a day and turned in. But we finally made it and had a nice dinner at the Deer Harbor Inn.

The next morning we were up early again for another hike, this time on Turtleback Mountain. Our hotel’s owner had recommended the Ship’s Peak hike, which was supposed to have great views of the island, but after our experience on Mt. Constitution I wasn’t hold my breath!

This hike was shorter but a lot harder because it was steeper. We caught the trail head off of West Sound and set off.

There were all kinds of signs about animals native to the mountain, and although I don’t have photographic evidence, we had some spectacular close encounters with bald eagles who were nesting overhead!

It was windy but clear, and we did have some great views from the top. 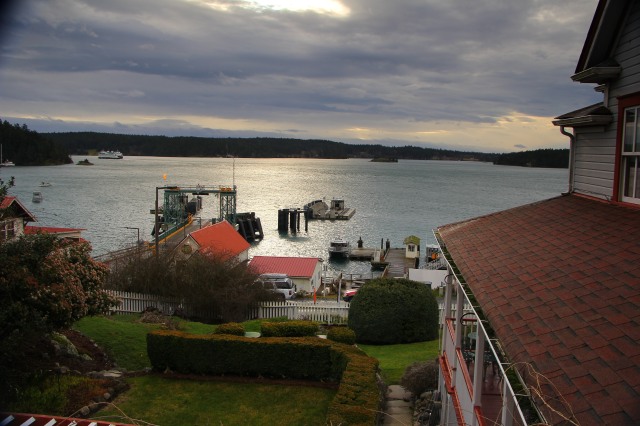 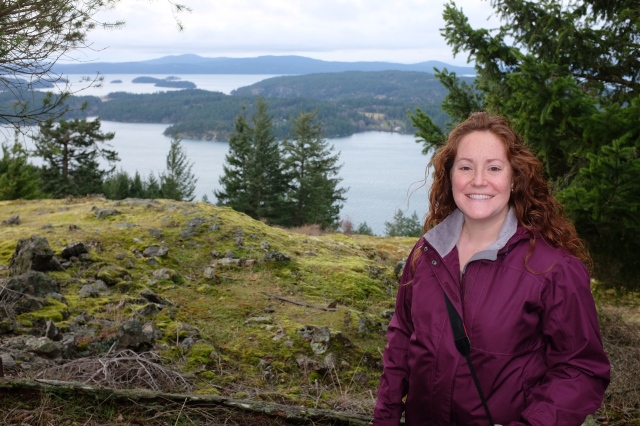 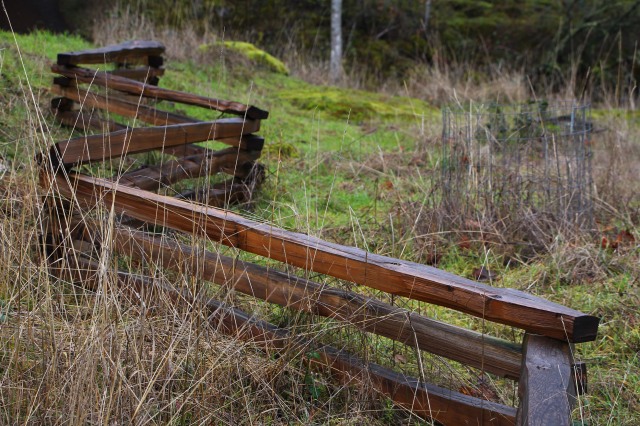 Pictured: Mt. Constitution from the top of Turtleback Mountain. If you imagine the top of the mountain in the midst of that cloud, that’s where we hiked the day before :)

After our hike we headed back to Eastsound for lunch and to check out some of the shops.

We forgot there was a Seahawks game wrapping up– there wasn’t an empty seat in either of the bar/restaurants we picked. We decided to wait it out at the White Horse Pub, which sits right on the water, and sure enough as soon as they lost, the place completely emptied. We were left with perfect seats overlooking the water, and enjoyed our Irish fare in relative peace!

After lunch we popped in Brown Bear Bakery for some currant scones that we saved for breakfast and a Sasquatch cookie that could have fed four people (yum!). 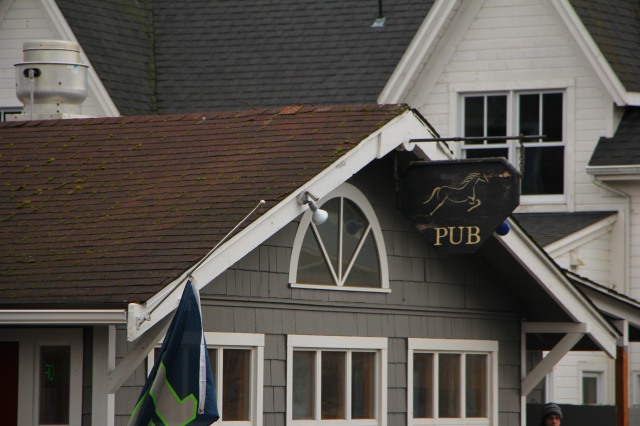 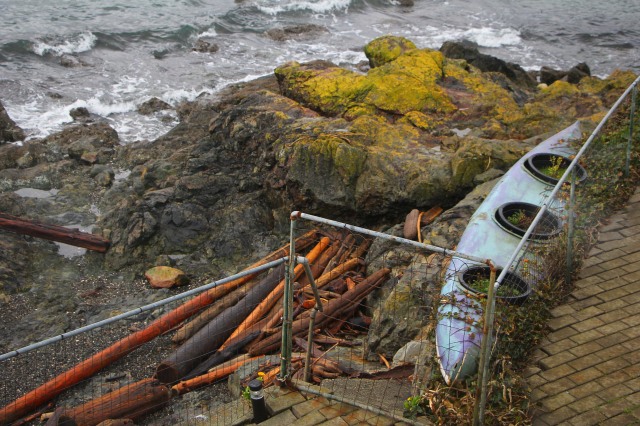 Many of the shops were closed since we were there on a Sunday afternoon in the off season, but we did stop in the food co-op so I could buy some treats from Girl Meets Dirt.

From there we drove over to Orcas Island Winery so I could do a tasting (the wine was just ok– we ended up buying a bottle of the Merlot and Chardonnay, which are not usually my top picks) and then over to Orcas Island Pottery. This co-op has been around for more than 70 years and features the work of two dozen artists.

We made it just before they closed so I didn’t get to look at everything they had, but what I saw was pretty incredible! I snagged a pretty wine bottle holder and then we had to leave.

Brian was nice enough to fly me back to the hotel so we could drop things off and make a pit stop before we headed over toward Massacre Bay to watch the sunset.

Despite my messing around we made it just in time to snap a few pictures– it was gorgeous.

We walked out on the docks and a few boats were out on the water catching the view as well. We walked along the beach and finally made our way back to the hotel for a decent dinner at Octavia’s Bistro and an early bedtime since we had to get up early for our ferry home. 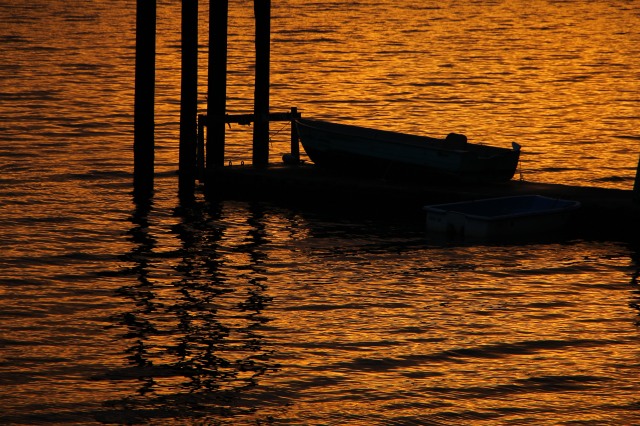 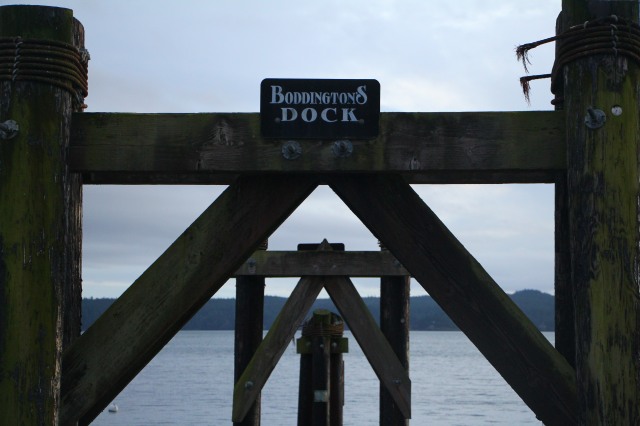 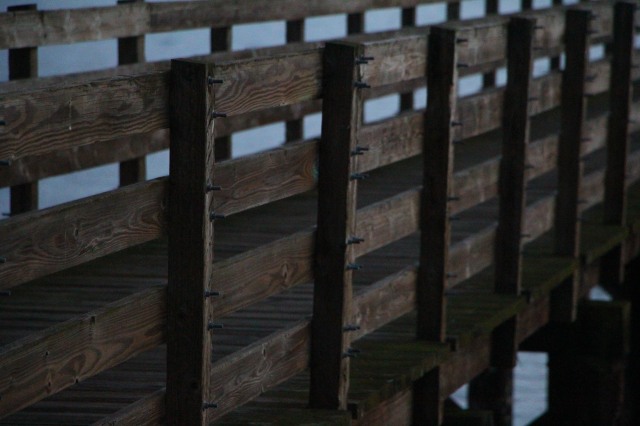 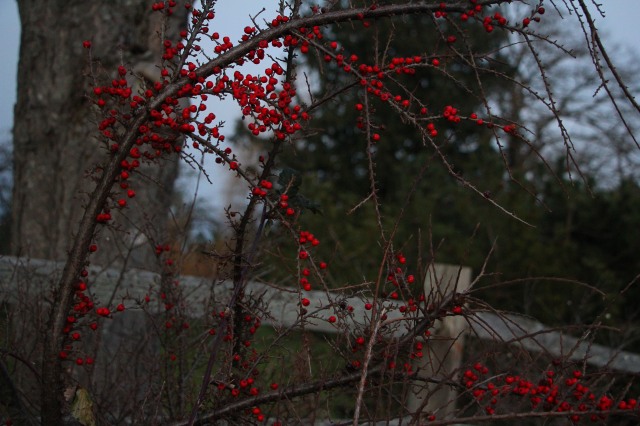 The next morning we checked out and drove around to wait in line for the ferry. We ate our scones and talked about the highlights from our weekend.

The best part about visiting the island during the winter is that there aren’t that many people. We could get around without worrying about traffic and we could enjoy the vast silence of the woods when we hiked because there was no one around. We also got into the lunch, dinner and drink establishments without any trouble– no need for a reservation anywhere!

The downsides of course were the weather and the fact that a lot of things were closed. We also couldn’t do any of the standard water activities, from kayaking to whale watching.

It was a perfect weekend getaway and I’m sure we’ll be back–both to Orcas Island and the other San Juan Islands. Until next time!

3 thoughts on “Weekend on Orcas Island”