Our first trip of 2016 was to Leavenworth, Washington, to see the little Bavarian town in the snow and Christmas lights! We stopped in Leavenworth for a day back in the spring when we drove out here from Ohio and I had been wanting to go back–especially when I found out they set up a Christmas Market!

We attempted to go just before the holidays in order to see the tree lighting ceremony and market, but we didn’t have chains for our tires and weren’t allowed over the pass. I was a little bummed we missed the festivities, but I was excited that the snow and most of the Christmas lights were still in place for this trip!

The drive over was amazing in and of itself–we don’t have snow in Lynnwood but as we got closer and closer to the mountains the temperature began to drop and the snow began to appear!

The pass was beautiful and I loved looking out the window at the trees and mountains covered in snow. As we got to Leavenworth the town was covered in fog so we did a quick turn and took a few pictures a little west of town where the sky was clear and the sun was shining.

Since we had been to Leavenworth before we really wanted to spend this trip walking around and exploring the nearby park. The only complication was the temperature– the high was 4 degrees! Freezing!

We did walk around and take lots of pictures, but we also had to pop in a few of the stores to warm up. We did a few wine tastings the last time we were there so this time we did a vodka and bourbon tasting at Blue Spirits Distilling. The espresso infused vodka was delicious, and they are rather smart–they have you taste each one straight and then in a mixed drink so you could get ideas of how to use it if you bought it. (which we did!)

Our other tastings were of a slightly different variety– meat and cheese! We stopped in the Cheesemonger shop first and hit it at just the right time–tons of people were piling out. We got to sample a few of their specialty cheeses before buying a chunk of the mustard seed to go.

We also popped in Cured to sample some different smoked sausages, which were delicious. We ended up buying a stick of the mushroom sausage, but we could have easily taken a cooler of meat home–I recommend you stop in!

After our samplings and some additional window shopping we did finally hit the Leavenworth Sausage Garden for lunch. The seating is all outdoors so I held our spot on a picnic table next to a heat lamp while Brian placed our order. The best part about this place was the condiment bar, which featured a couple dozen mustard varieties for your brat/sausage! I ended up trying 4-5 and loved the spicy ones.

We walked over to the Gingerbread Factory at the Espresso Haus to share a cinnamon roll bread pudding for dessert, which was also incredible. 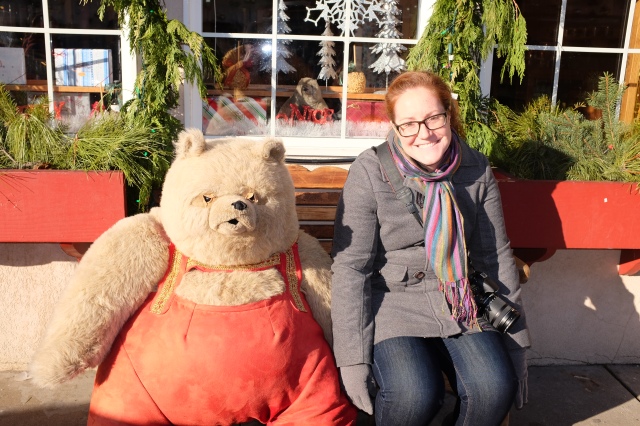 The sun was already sinking when we finished eating so we decided to head down to Waterfront Park for a walk in the snow.

There were quite a few people in the park, some just taking a walk but many others walking their dogs or sledding with their kids.

We walked along the water and took some beautiful pictures from the bridge. Brian brought the tripod so there are even a few of us together!

It was a total winter wonderland with the snow and woods and mountains in the background! 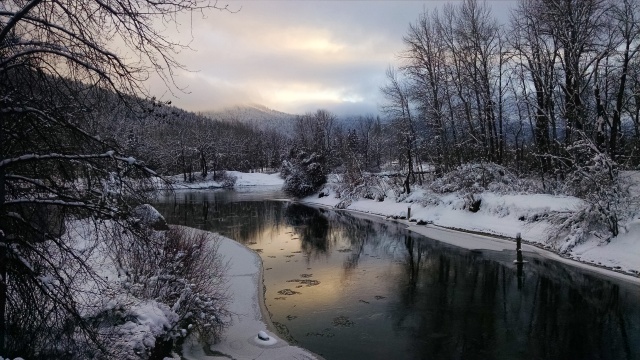 We were spent and as the sun dropped, so did the already freezing temperature.

We headed back to the car just as the Christmas lights came on around town. I’m sure they are wonderful at night, but I can attest to their loveliness at dusk!

Leavenworth is so much fun all year round–I’m sure we’ll be back again! 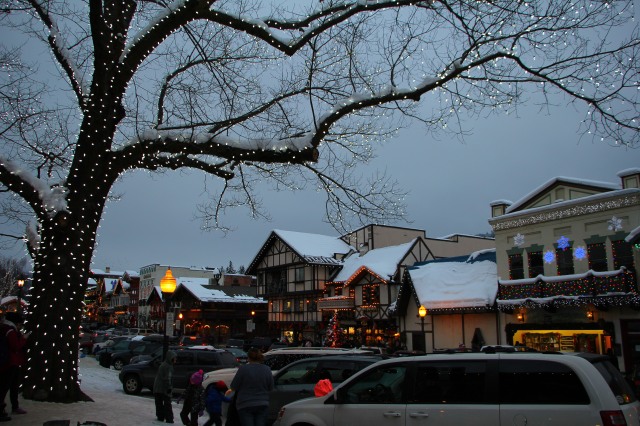 2 thoughts on “The Bavarian Wonderland of Leavenworth”