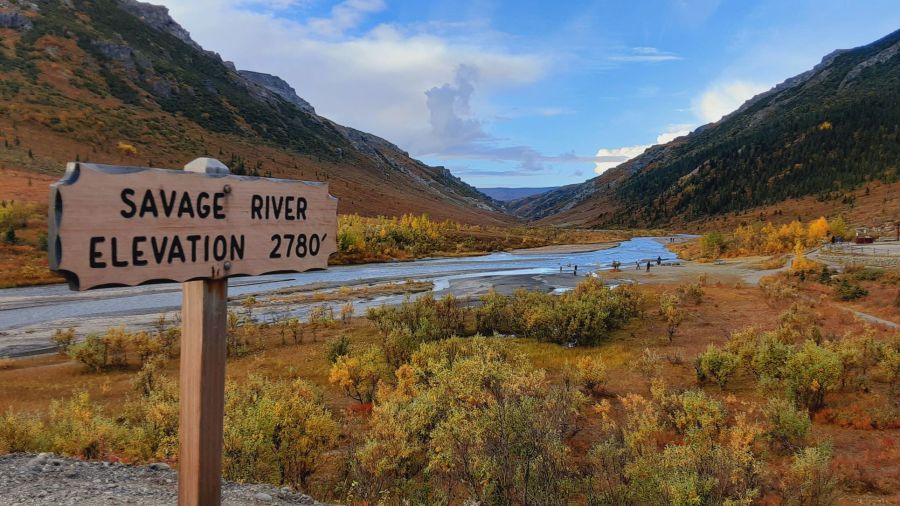 After we spent the morning exploring Fairbanks, we headed south for Denali National Park. By late afternoon, we were checking into the Denali Park Hotel, which is about 15 minutes north of the park entrance, just as a thundercrack split the sky. Storm clouds were gathering in the east but to the west, the sky was getting light with patches of blue.

It was supposed to rain each day we planned to be in the park so we decided to take advantage of what appeared to be a moment of good weather and squeeze in a short hike near Savage River.

Savage River is about 15 miles into the park and the farthest you can drive a personal car without winning a permit. We entered the park and passed the Visitor Center complex (currently closed due to COVID-19) when I noticed some cars slowing down and some hikers crossing the road pointing behind us. I looked around and there was a bright rainbow arching over the mountains! We pulled into the nearby parking area so we could admire the view and snap a few photos – a great reminder of the beauty sometimes hidden in the clouds and rain.

A few miles in, we came across a sign designating a 5-mile area where you needed to remain in your vehicle due to moose rutting. I have been wanting to see a bull moose in the wild for a long time. We briefly saw one from our cruise ship several years ago but it was really far away; a pinprick even with our giant camera lens. I didn’t realize we would be in Denali during moose rut, but if you want to increase your chances of seeing a moose, this is the time to go.

We drove a short way beyond the sign to find several cars along the road and a cow moose in the trees at the curve of a rocky riverbed. My first (and thankfully not my last!) moose of our trip!

Incredibly, a bull moose was directly below us, preparing to cross some smaller sections of the river. It was amazing – he was so big! We watched for a while as he made his way through the water and then found a parking spot to set out for our hike.

The Savage River trail is a two-mile roundtrip hike along the water with basically no elevation change. The trail is well maintained with some uneven surfaces I kept tripping on as I looked at the incredible views around us. We saw people in a variety of footwear and gear – it was quite accessible to a wide range of hikers.

We hiked the eastern bank out, crossed the wooden bridge at the turnaround point, and then walked the western bank back to the road where we crossed the vehicle bridge back to our car. There were a handful of people hiking and one giant magpie that kept walking the trail opposite us. Brian caught a great picture of his funny, straight-legged gait below.

We enjoyed blue skies on our hike in between the surrounding hills and then dramatic cloudy views as we returned – I’m not sure which I liked more!

This was a relaxing, peaceful hike, filled with the sounds of the river and not much else. Highly recommend checking it out if you’re able to access Savage River via your personal vehicle or one of the park shuttles.

On our drive out of the park, we saw there were still a few cars along the road where we saw the cow moose on our drive in. Sure enough, as we approached, a guy started waving his arms at Brian. As we rolled to a stop, a moose (I assume the same one we saw earlier) lumbered out of the riverbank and into the road right in front of us.

I was nervous for the people standing outside – the park guides warn to stay at least 25 yards from moose, especially during rut, and to look for warning signs like their hackles going up, ears going back, etc. as the few signs they will show before they attack. She was clearly uneasy, with her ears flat back the majority of the time she was standing on the side of the road, but she eventually walked across and disappeared into the bushes. She was so tall – I was amazed and grateful to have time to see her up close, from the relative safety of our car, for as long as we did.

What an amazing start to our Denali National Park experience!