We met my in-laws in San Francisco for Memorial Day weekend, flying direct from the relatively new Paine Field in Everett, Washington. (This airport is only 15 minutes from our house and has revolutionized our west coast travel!)

My in-laws were at the tail end of an impressive roadtrip, having flown into Vegas and traveled through Death Valley, San Diego, the coast and LA to meet us for a final weekend in San Francisco and the surrounding area.

We decided to divide our time between sightseeing downtown as well as exploring Muir Woods and the California coast. This allowed us to revisit a few of our favorite spots that my in-laws hadn’t experienced before while discovering some entirely new places together!

A long weekend wasn’t nearly enough time to tackle everything on my list, but here are a few of the downtown experiences we really enjoyed.

We started our day at the iconic Golden Gate Bridge, driving through Chinatown on our way there. Traffic was crazy and people wouldn’t let us merge so we ended up being forced to cross over the bridge, turn around, and drive back over the bridge instead of getting off at the visitor center. A little extra time and travel but we all got to see the bay from multiple points of view during our journeys back and forth!

It had been years since Brian and I visited the bridge so we were surprised to see the shining new visitor center, which was renovated to celebrate the bridge’s 75th anniversary in 2012. One of our favorite things was still there— a segment of the giant cables showing all of the strands that make up the whole.

It was a bit overcast and breezy as we set off to walk out to the bridge’s midpoint but it cleared up a bit once we were there. We took some time to watch the surfers along the shore and I couldn’t believe all of the pelicans flying low over the water— I think that’s the most I’ve ever seen in one place!

A visit to San Francisco isn’t complete without a quick trip to the bridge— it doesn’t disappoint!

A visit to San Francisco isn’t complete without seeing Lombard Street–the crookedest street in the world! We ended up experiencing it twice— once driving down it and once walking down it.

I really liked experiencing it both ways. It’s fun to slowly wind your way down in a car, but walking down allowed us to admire the houses along this crazy street and wonder what it’s like for the people who live there! How can you ever get out of your drive with the constant stream of traffic?

The trolley stops at the top of Lombard Street so that’s another fun way to take in this crazy, famous landmark! 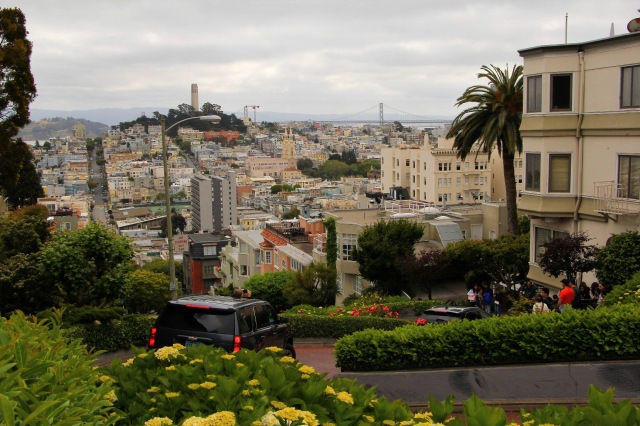 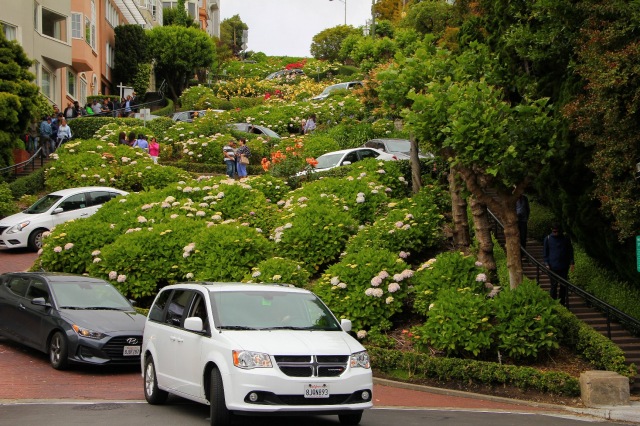 The number one thing on my mother-in-law’s list was taking a ride on the city’s iconic cable cars! We bought our tickets online and waited forever to catch a ride— every trolley that came by was packed with people and a couple didn’t even stop to take on new passengers because there was no room.

We finally had our chance and hopped on the outside railings across from each other— Brian and Danny on the left of the car and Ann and I on the right.

I think Ann and I picked the correct side— the guys had to squeeze in against the trolley on a couple of occasions when there was closely passing traffic on their side! The ride was so fun, especially as we headed down the finally hill toward the bay and Fisherman’s Wharf. It looked as though we were going to fly right down the boardwalk and into the water! 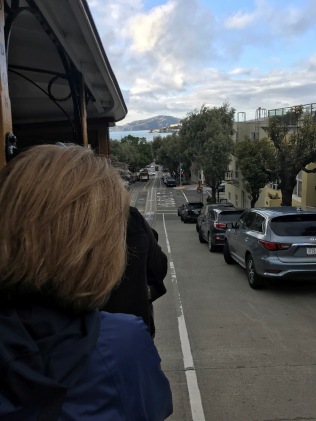 Given how much we enjoyed our cable car ride, we also decided to check out the free San Francisco Cable Car Museum to learn more about their history. The first cable cars began operating in San Francisco in 1873 with new technology that quickly expanded. However, as newer transportation options were introduced the cable car lines were slowly eliminated. Thanks to an incredible group of citizens, three of the lines were saved and continue to run today.

The museum has two floors and the top floor wraps around and looks down onto the actual engines and wheels operating the cables. The displays and artifacts were very interesting and there was a small gift shop as well. This stop is good for those of all ages and allows you to explore at your own pace based on your interest. 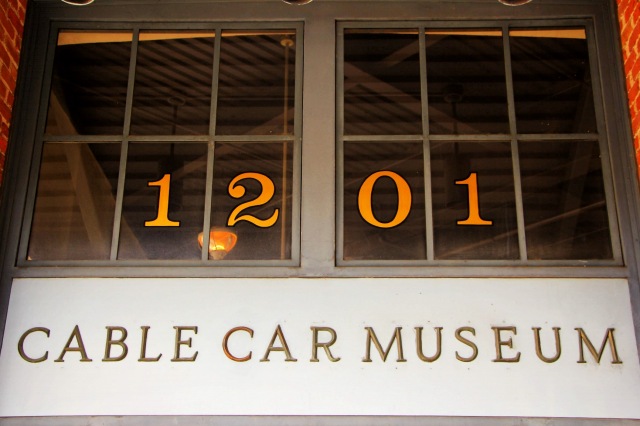 We had never been to Coit Tower, the white concrete column built in 1933 in honor of the wealthy benefactress Lillie Hitchcock Coit. An elevator takes visitors to an observation deck with 360 degree views of the city and bay. On the first floor the walls are covered in colorful murals that were painted in 1934 by local artists to depict life in California during the Depression. The tower sits on Telegraph Hill, which used to feature a telegraph station that would indicate ship arrivals during the mid 1800s.

There is a road that takes you up to a circular parking area surrounding the tower, but we approached the tower via trolley and then on foot. As we reached the base of the hill, we came across the Greenwich Steps, which take you through a lovely residential neighborhood directly to the tower. There are 387 steps, and aside from one small jog between the lower and upper sections of steps, you are climbing straight up!

I was so proud of us for conquering the steps! My heart was racing by the time we got to the top but it was a beautiful day, we had awesome views, and I was happy to wait in line and recover my breath before we headed to the top of the tower! 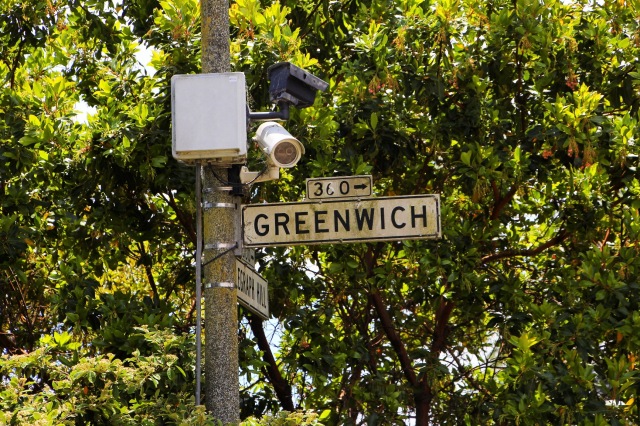 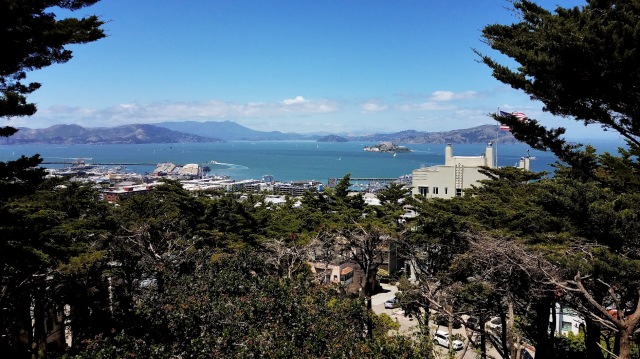 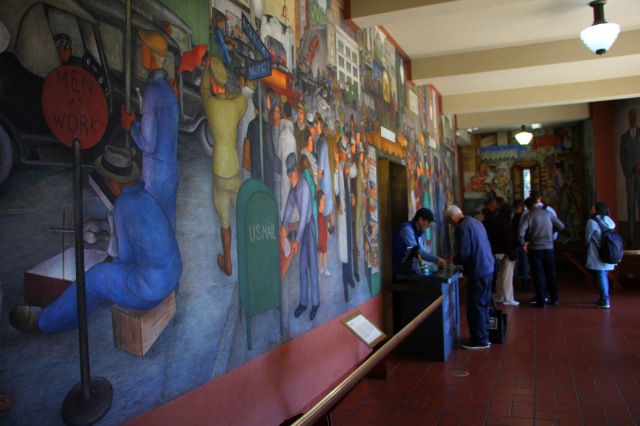 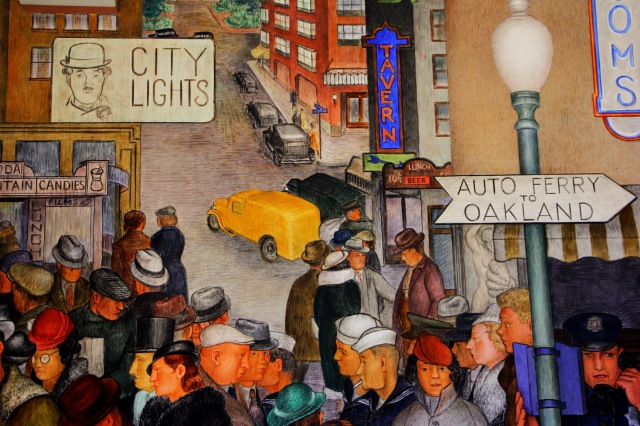 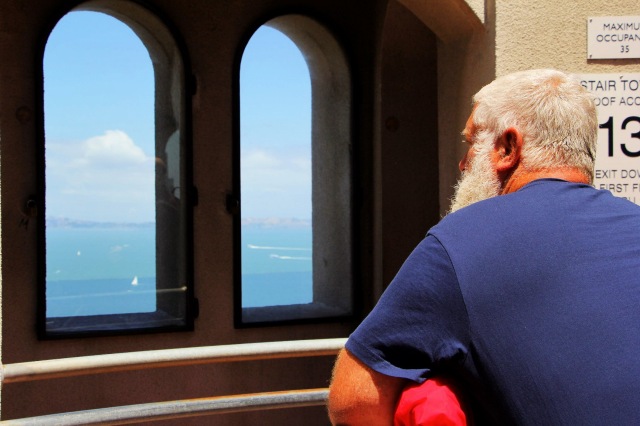 These were just a few of our favorite spots in San Francisco. What others top your list?

One thought on “Sightseeing in San Francisco”