Our good friends moved to West Haven, Utah, several months ago, and we’ve been missing them ever since. Ian and Brian went to college together and reconnected when we moved to Seattle—I fell in love with Ian’s then girlfriend/now wife Nicole, and we had a blast getting to know them and the Pacific Northwest.

They encouraged us to get into hiking, which we now love, and we encouraged them to travel by train with us to Vancouver, BC, which ended in disaster. You know, the stuff friendships are made of!

When they moved to Utah, we of course promised to come visit. Months later I was still thinking about our promise and how we could squeeze in a trip to see them next year. But next year seemed so far away and is already filling up with other commitments and plans. I was starting to feel like we needed to take the bull by the horns and just make something happen.

As luck would have it, my school schedule and Brian’s hunting schedule aligned such that we had a relatively light weekend in November and decided to see if they were around. They were available and kind enough to let us invite ourselves to stay with them, so Friday after work we hopped on a short plane ride to Salt Lake City and spent the weekend catching up on life and exploring some of the things they hadn’t got around to doing in their own backyard.

The West Haven/Ogden area is a lovely mix of historic buildings that sprung up along the former passenger train route and rural, undeveloped acreage surrounded by beautiful mountains. I can definitely see the appeal.

On Saturday morning we slept in, ate amazing homemade buttermilk waffles and huevos rancheros, and then set off on a nearby, four-mile roundtrip hike to Waterfall Canyon.

The trail wound through some brief woods/growth and then opened up into a less congested landscape with bushes and small trees somewhat similar to the terrain we experienced during our hike in Sonoma, California. It quickly became rocky and rugged, especially as we caught the stream leading us up to the waterfall. We had amazing views of the surrounding area and could see for miles. 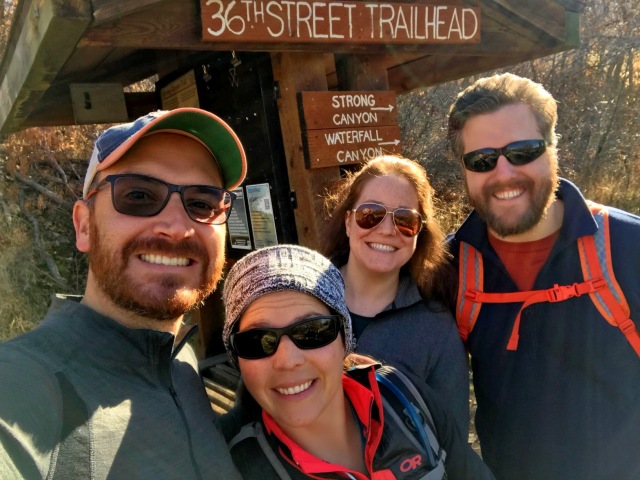 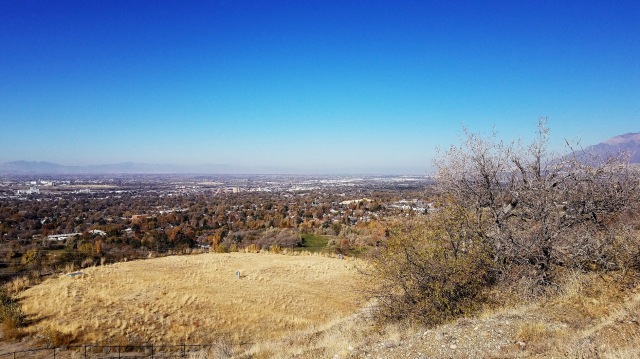 There were quite a few people on the trail both hiking and bicycling. After a brief wrong turn we followed the trail up until we reached the falls, which were almost entirely frozen and absolutely beautiful! I’ve never seen a frozen waterfall before!

We talked some kids into taking our picture before heading back toward the trailhead and on to our next destination = lunch! 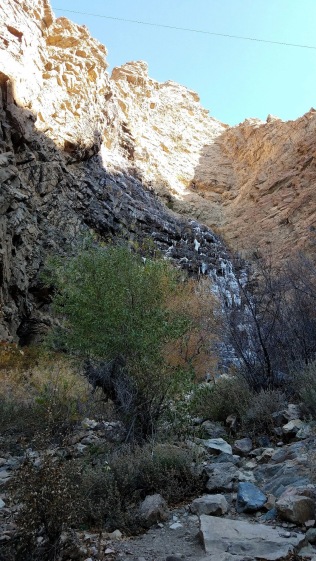 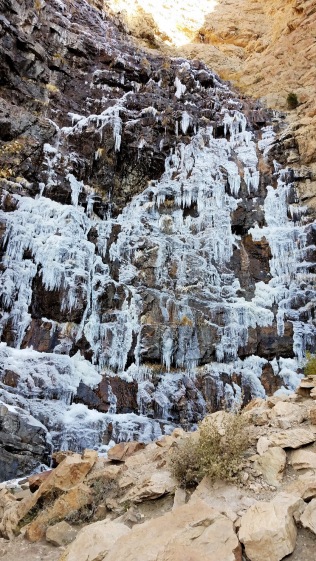 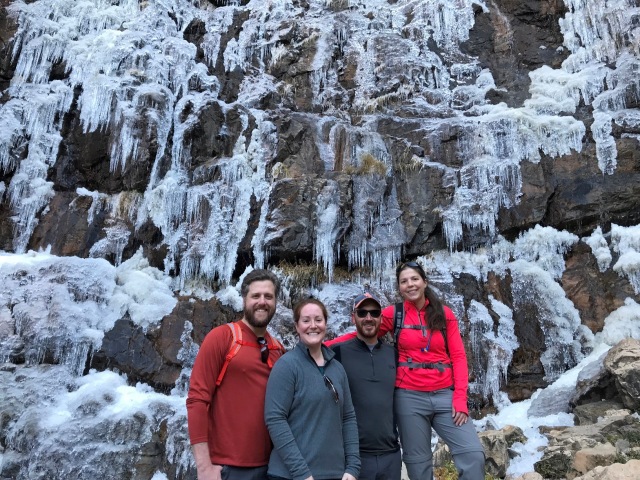 We headed to Talisman Brewery and as luck would have it, one of its food truck vendors was just wrapping up brunch—the two guys running the operation said they had a few plates of pancakes and huevos rancheros left, and Brian told them we would buy them out!

I don’t even remember the last time I had huevos rancheros, let alone twice in one day! The food was delicious—especially the Mexican spiced butter for our pancakes!—our beer samplers had some interesting options. We were stuffed and ready to walk off our lunch by the time we were through sharing our meal. 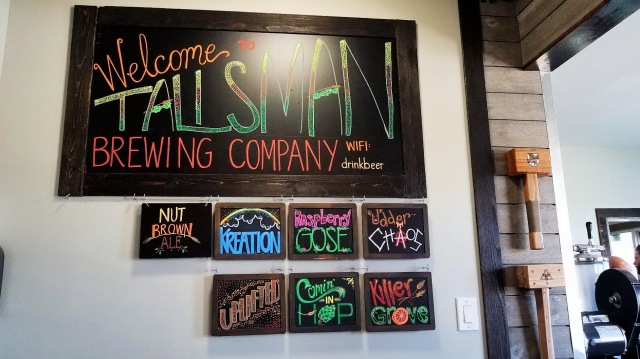 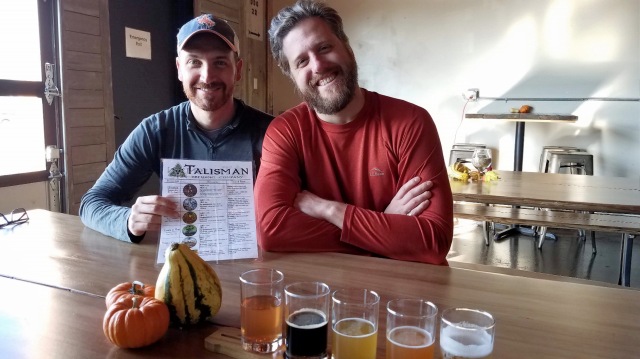 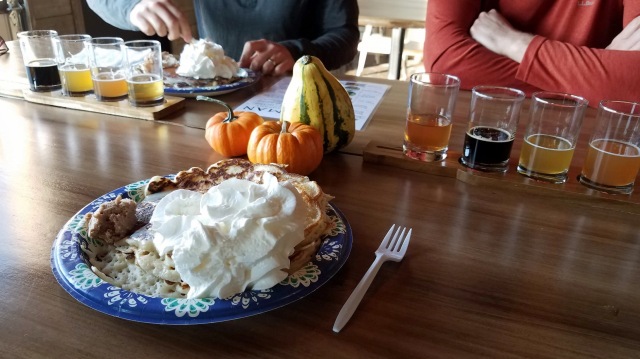 When we originally looked up things to do in Ogden, the Browning Museum went to the top of Brian’s list. As it turned out, Union Station is home to several local museums and a $7 adult ticket got you all-day access to all of them!

The station itself is worth visiting inside and out, having been rebuilt three times since its origins in the 1860s. According to the station’s website:

The first train station in Ogden was a small, two-story building on the banks of the Weber River, which opened in 1860.  The facility quickly became inadequate so the Union and the Central Pacific combined forces in 1889 to build a much larger Union Station, of brick and a center clock tower.  The grand station was dedicated on December 31 in 1889 and attracted around 6,000 people.  This station included 33 hotel rooms, a restaurant and even a barbershop.

A fire burned much of the station in the 1920s, requiring it to be rebuilt once again, and by the 1960s its passenger services were dwindling due to automobile traffic and it was soon after converted into a historic site full of museums.

We went inside, purchased our tickets, and started our tour with the John M. Browning Firearms Museum.

The Browning Museum has some interesting history about the Browning family and is filled with Browning’s rifles, shotguns, pistols, machine guns, cannons, and even some miniature firearms that were used as advertisement displays when people were considering ordering a new gun.

Brian and Nicole know a lot more about guns than me and seemed to really enjoy all of the displays–I found the history and some of the informational displays on engravings more interesting myself. If you’re into weaponry, you definitely have to add this museum to your list! 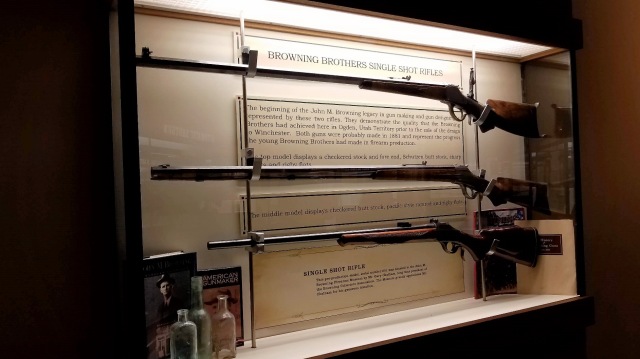 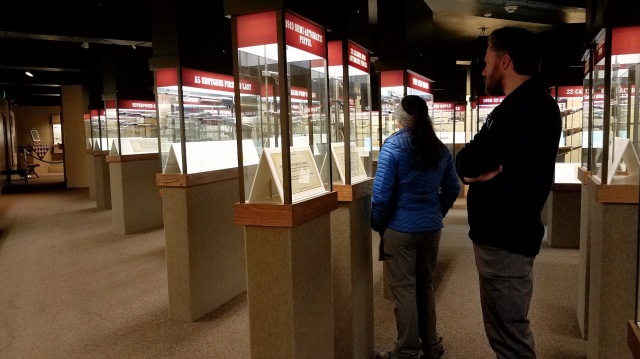 We also visited the Browing-Kimball Classic Car museum, home to a 1911 Knox, which was my favorite. I loved the bucket seats and the gas lanterns hanging off the front of the car and serving as headlights!

The museum also has vehicles ranging from a 1901 single cylinder Oldsmobile to a 1930 16 cylinder Cadillac. A woman at the front door was happy to follow Brian and Ian around, answering their questions and volunteering all kinds of additional background. 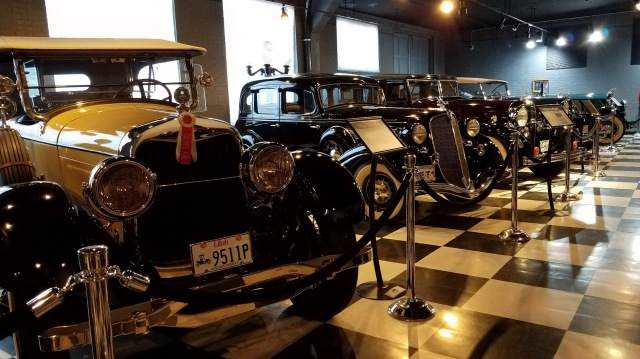 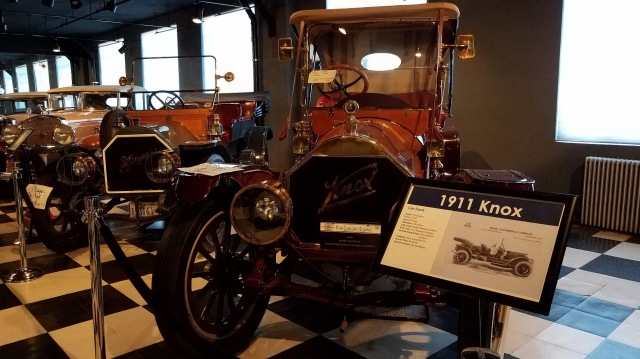 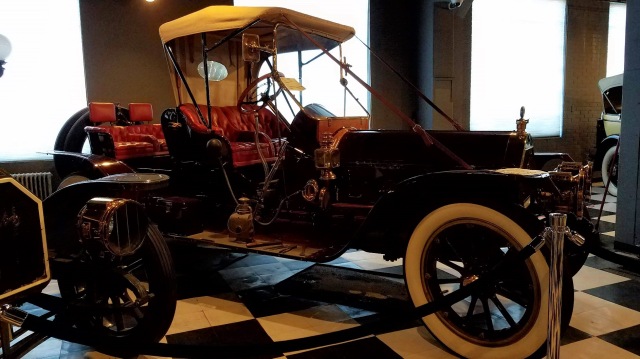 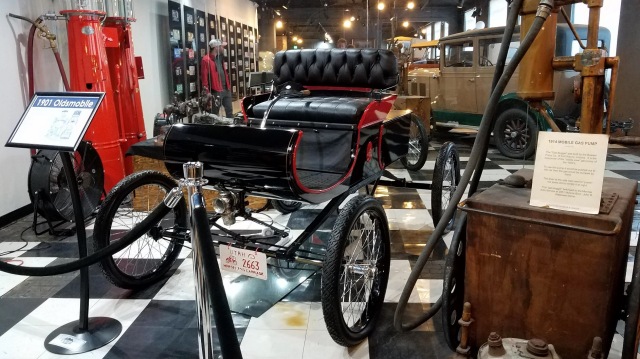 Our final stop was the Utah State Railroad Museum which had interesting exhibits detailing the history of train travel in the area as well as artifacts from some of the early passenger train lines.

I was especially fascinated to learn that train travel is what really inspired people to start carrying pocket watches and to concern themselves with the exact time. Before that, nothing in life required people to be so precise in knowing the time to the exact minute or to require standardization of time across a geographic area. Who knew?!?

We concluded our visit with the actual engines and cars parked alongside the station. The sun was starting to set, lighting up the buildings and mountains to the east, and we were ready to head home and change clothes before deciding how to end our evening. 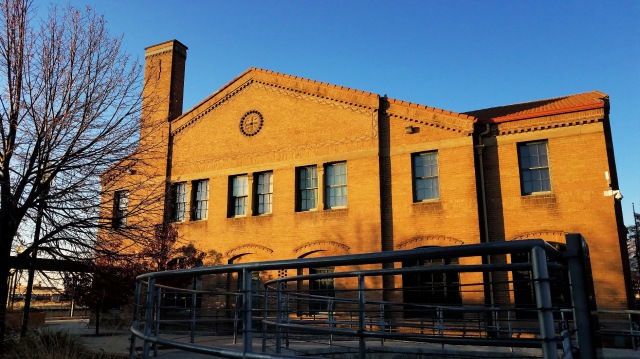 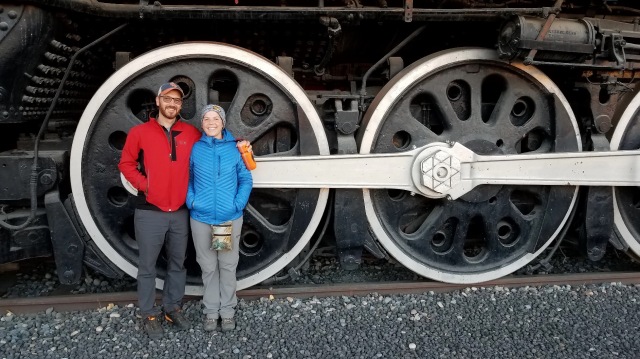 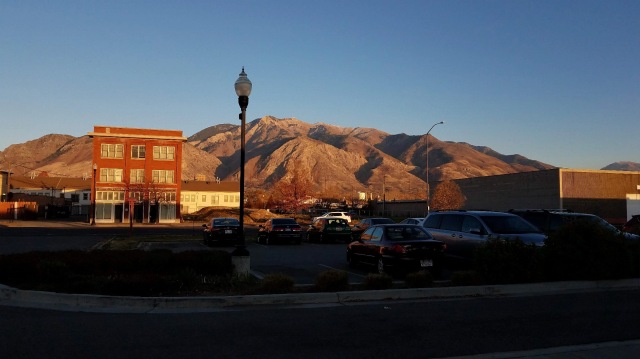 We ended up concluding our day with live music, beer and pizza at Slackwater Pizzeria and Pub in downtown Ogdon before turning in rather early. The early sunset plus our adventures had completely wiped me out—but I was so happy to spend the day with friends, exploring their new home and learning more about the history of Ogden and the surrounding area.

If you’re visiting Salt Lake City and need a break from the bustle of a busy downtown, Ogden is only a 40-minute drive away and offers amazing outdoor activities and railroad history options in a more relaxed setting. Don’t miss it!