A few years back we visited Fort Ebey with my parents as part of a day-long adventure on Whidbey Island. As we were exploring the area around the fort, we ended up walking along a trail that offered spectacular views over the Sound and Olympic mountain range.

Ever since we’ve been saying that we should return and complete the full hike along the bluffs.

The weather has been beautiful so we finally made the trip! We hopped on the motorcycles, took the ferry from Mukilteo to Clinton, and made the 45-minute drive across the southern part of the island to Ebey’s Landing.

There are several ways to access the trail but we decided to park at the lower lot near the Ebey’s Landing trail head. There were quite a few people already there, including a work party that was setting out to pick up trash along the beach. We peeled off our riding gear and set out to make a giant loop by connecting several trail systems. 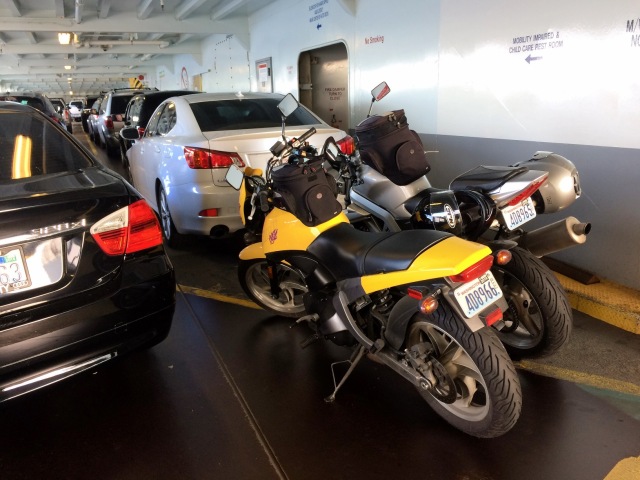 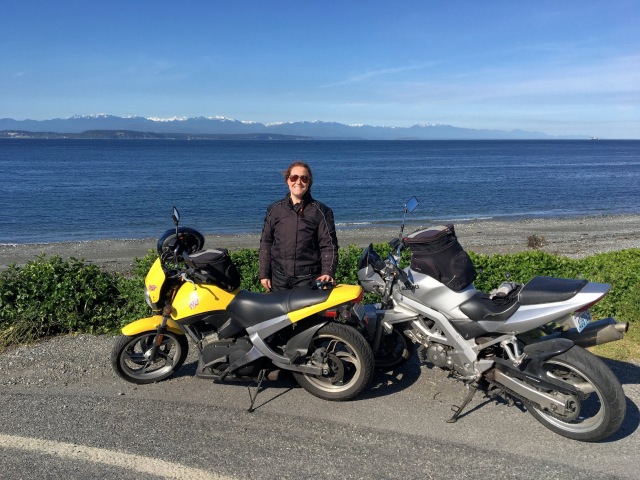 We began by heading north on the Bluff Trail, which is a narrow but obstacle-free walk overlooking the beach.

Going early was the right decision both because the sun was still rising and lighting up the Olympic mountains and water and because the hike is completely exposed/has no tree cover. We wouldn’t have wanted to do it at midday with the sun beating down overhead! 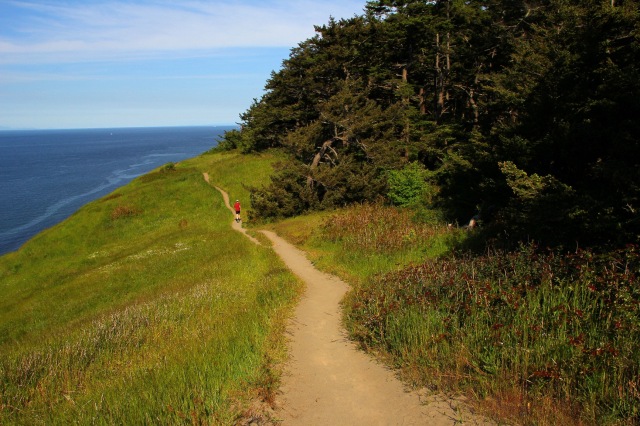 There’s a natural turnaround point at the end of the trail but we took the advice of other Washington Trails Association members and hiked down to the beach, timing our arrival with low tide, and continuing north via the rocky beach toward Fort Ebey.

These couple of miles were slow going as the beach is covered in rocks and driftwood. Your feet are either sinking in the sand and pebbles or you’re hopping from rock to rock. Thankfully we were able to distract ourselves with the absolutely beautiful views over the water!

I didn’t feel like we were making a ton of progress but we did finally arrive at the Lake Pondilla beach access area where we were able to jump back on the Bluff Trail heading south. 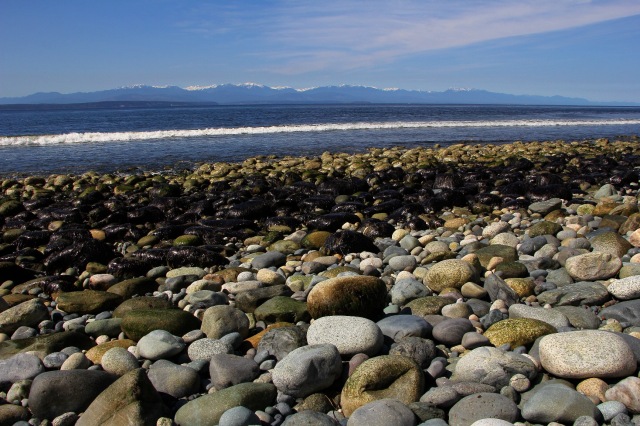 Much like we experienced on our earlier leg of the Bluff Trail, this path also overlooks the water and mountains and eventually drops you off at Fort Ebey, where you can explore the old gun battery and surrounding area.

While much of the trail was exposed, this section cut into the woods more often and connected to a number of camping areas, all of which seemed to be in use! 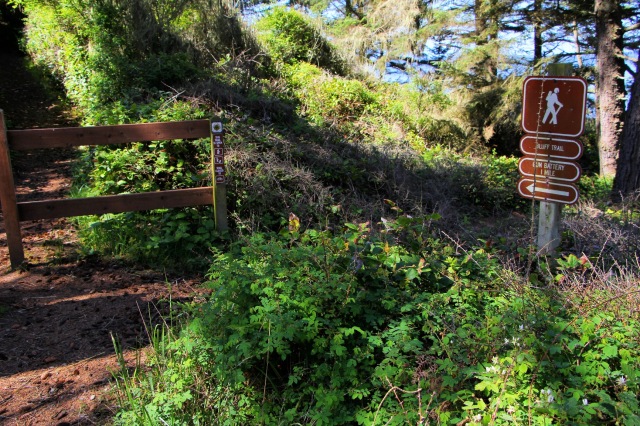 Just south of Fort Ebey we caught the Cedar Hollow and Cedar Grove Loop trails, making our way through some lovely forested area. The trail names are misleading, however– we didn’t come across a single cedar in the woods! What we did come across were two snakes, which had Brian on the alert the rest of the trip. He claims he’s not coming back to Whidbey now that he knows the island is ‘riddled’ with snakes!

It was perfect timing to be under cover as it was approaching mid-day and about 80 degrees–we were thankful for the shade! 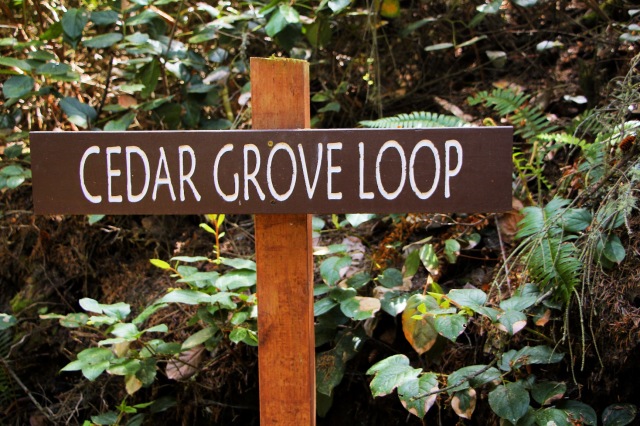 The last leg of our hike was on the Kettles trail system, which is a wide and very well maintained trail that runs along the main road. This was not a very interesting leg of the hike, but it was functional in that it brought us to a small trail that cut alongside a pasture back toward the water.

This was a nice and relatively new trail that was very well-marked and maintained. It ran through the woods along the pasture fencing for a ways–we stopped to check out the cows that were grazing nearby. The trail wove out of the woods and through the pasture until it brought us back out to the Bluff Trail not too far north of the Ebey Landing parking lot where we had left our bikes. 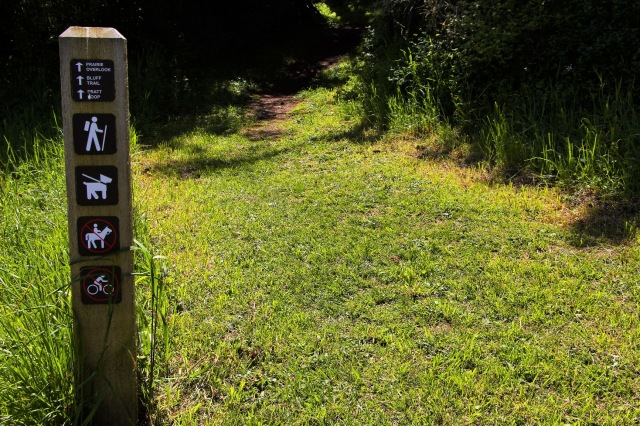 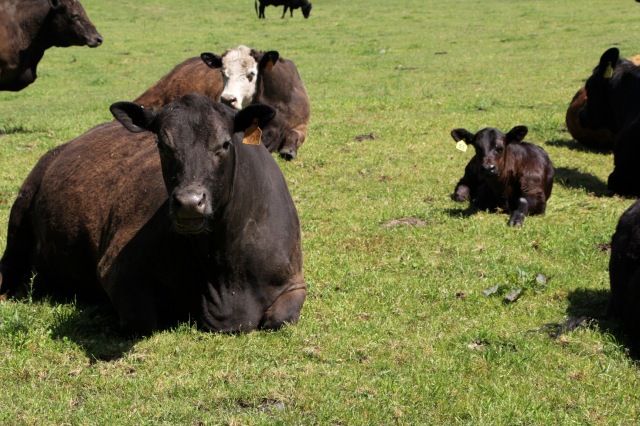 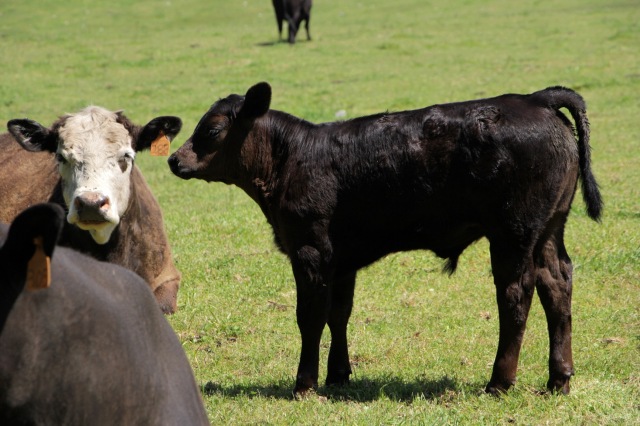 Overall our hike was just under 10 miles, included about 700 feet of elevation gain, and took us just over four hours to complete.

I definitely recommend choosing a clear day so you can enjoy the views along the Bluff Trail, but also recommend going early in the season or at least early in the morning as much of the hike is exposed to the sun/heat. Happy hiking! 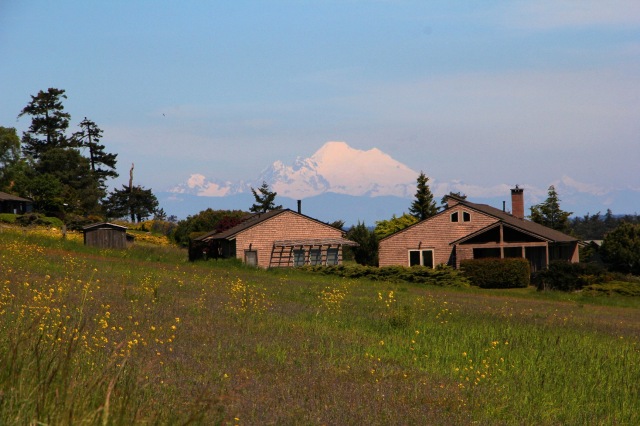 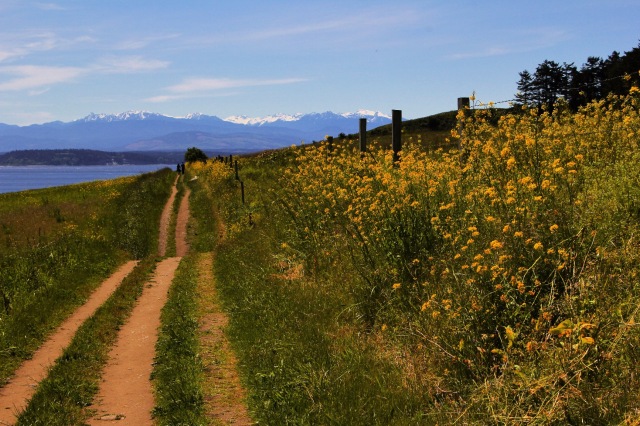