We have always enjoyed spending time outdoors and have really enjoyed tackling progressively more challenging hikes since moving to the Pacific Northwest.

When we moved here from Ohio, we were excited to spend more time in the mountains, which we simply didn’t have the opportunity to explore back at home.

What I didn’t anticipate is that we would catch the bug for actually summiting the nearby mountain tops!

While only a recently acquired hobby, we’ve already tackled and accomplished a couple of fairly challenging summits– Mount Si, a local favorite where I learned a few key lessons about mountain climbing, and most recently Dirtyface Mountain.

I was a little nervous heading into our effort to summit Dirtyface. Brian’s brother, Mark, co-mastermind of our second summit attempt (along with Brian), had been training and was flying out to join us in the attempt. Aside from some local hikes, we hadn’t done a whole lot of training and I was afraid I would be holding him back.

Mount Si ended up being a good training ground for Dirtyface Mountain, which is about a mile longer round trip with an additional 1,000-foot elevation gain. We knew if we could summit Mount Si we would be able to summit Dirtyface Mountain.

What I liked about Dirtyface Mountain is that there was no mountain climbing at the top–you could actually hike all the way to the summit. I also liked the numerous viewpoints along the way to the top. I needed to take a number of breaks during our uphill climb, and while I felt bad slowing Brian and Mark down, I did not feel bad taking a moment to enjoy the incredible views out over the Cascade Mountains.

We headed over to Plain, Washington, on Thursday night to stay in the bungalow at my friend’s cabin. It worked out perfectly because we had to get up early Friday morning so we could drive to the trailhead and hit the trail as soon as the sun was coming up around 5:30 a.m. It was already pretty light outside as we began our upward climb.

We had one hiccup on our journey when we lost the trail near a beautiful waterfall pretty early on in our hike. We somehow hooked on to an animal path rather than realizing we needed to forge the stream and pick up the trail on the other side.

It was a lovely stop and the guys hiked up close to the falls while I took pictures of the surrounding area, including the amazing wildflowers all along the stream. 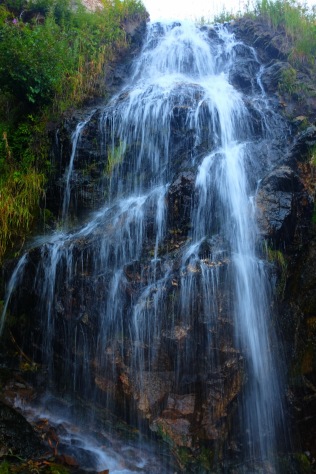 The first part of our hike was great but the trees eventually began to clear and the elevation began to sharply increase. The guys were well ahead of me most of the time, but I tried to keep a steady pace, sucking in breath and putting one foot in front of the other.

There were tons of switchbacks, and as we got closer to the top, I was surprised to come around one particularly steep bend to find fields of badly burned trees from the forest fire back in 2005.

It’s crazy how long it takes for the area to fully recover. While the ground has renewed with all kinds of green life, there were only a few smaller trees beginning to grow. 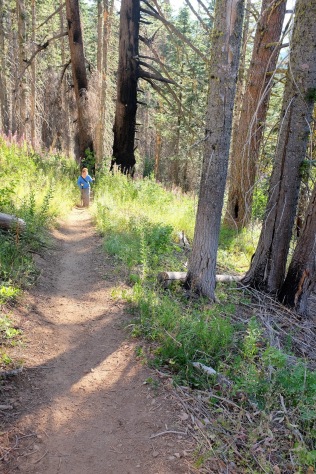 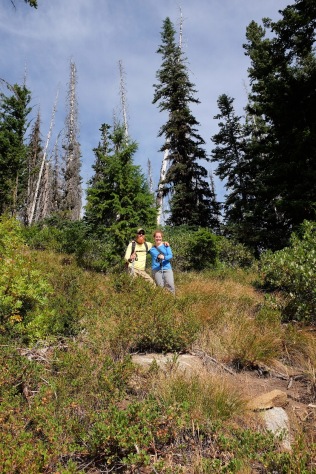 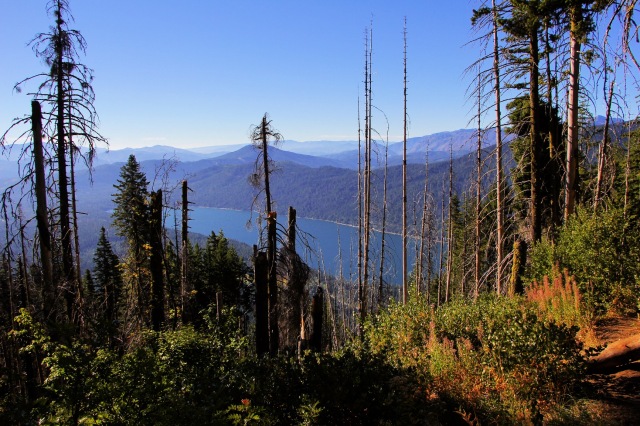 The guys let me catch up with them at the very end so we could summit together.

At 8.75 miles roundtrip with a 3,925 foot elevation gain and summit around 5,994 feet, Dirtyface Mountain was our highest summit yet and offered spectacular views in every direction.

We climbed all over, taking pictures of each other, resting on some of the rock plateaus, and simply enjoying the view.

Brian had purchased us matching socks for our adventure so we had to take a group shot with those as well! 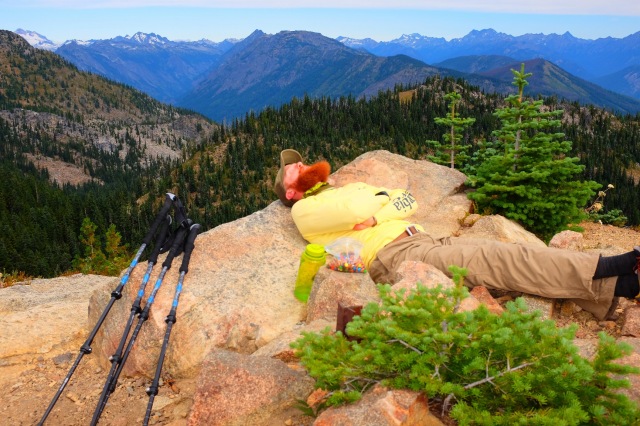 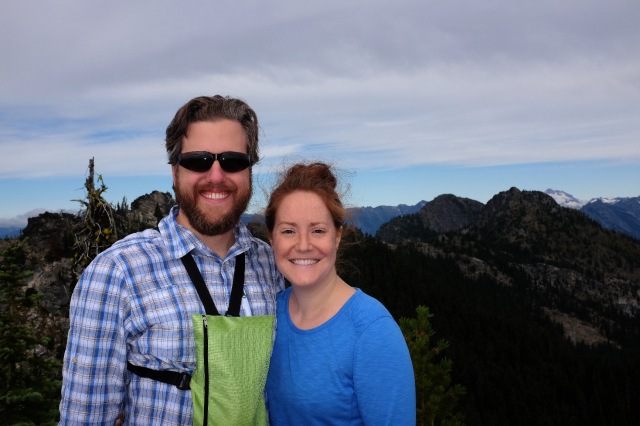 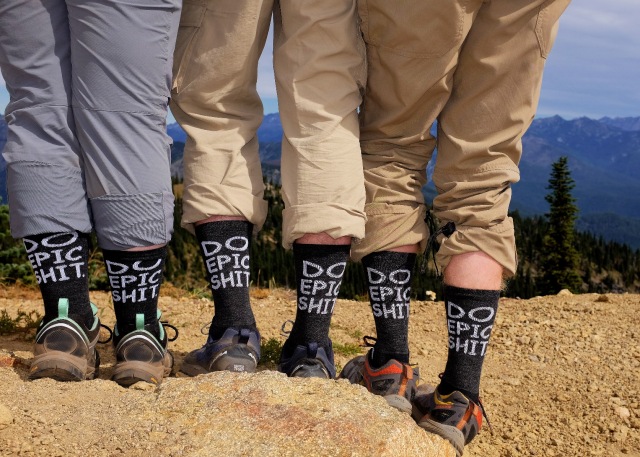 Another couple came up a little while later and I think we were all surprised to see each other. We had passed one group on our way up who had obviously spent the night somewhere along the trail and were heading back just as we were setting out, but aside from them we hadn’t see anyone all morning.

Apparently we were just first out the gate because we passed a fair number of people during our hike down. My knees were starting to act up so I was relying heavily on my poles and trying to take it slow.

We were all ready to be done once we neared the waterfall and stream again–there were several clearings and the sun was beating down. Brian bought a water filtration device that we used to refill our empty bottles at the stream before finishing our hike and regrouping at the car.

Sure enough, the parking lot had a handful of new vehicles, and I was thankful we had started out early before the sun was overhead and the trail was full of people. 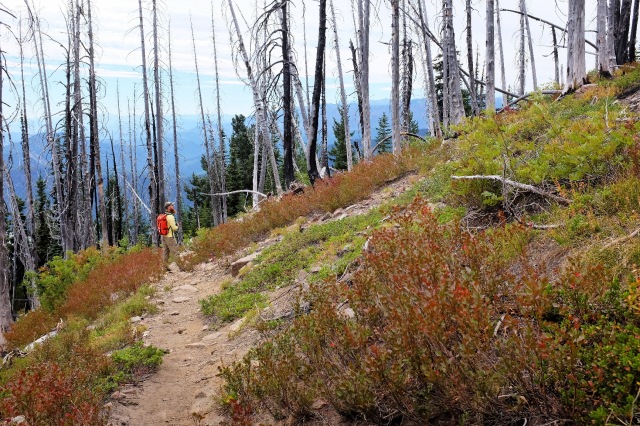 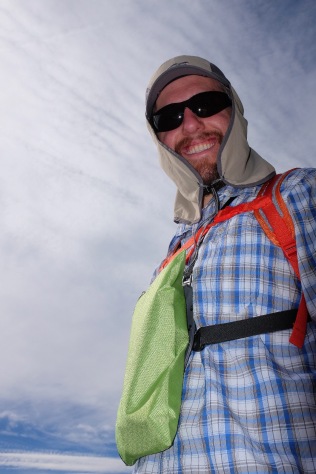 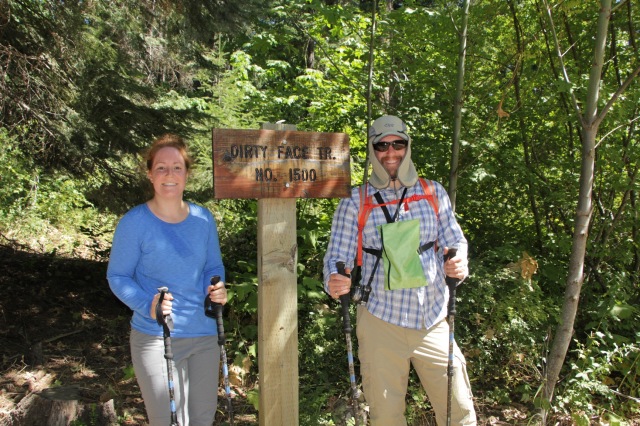 It was Mark’s first time in the Northern Cascades so we took him to Leavenworth to see the German-themed town and grab a hot pretzel.

We were taking my friend Robyn and her husband out for pizza and Dirtyface beer that evening as a thank you for letting us stay with them so we didn’t want to ruin our appetite. However, we thought we had enough time for a quick pre-dinner celebration at two of the tasting rooms downtown–Blue Spirits Distilling and Icicle Brewing Co.— where we shared a couple of samplers.

Another successful summit in the books. Cheers! 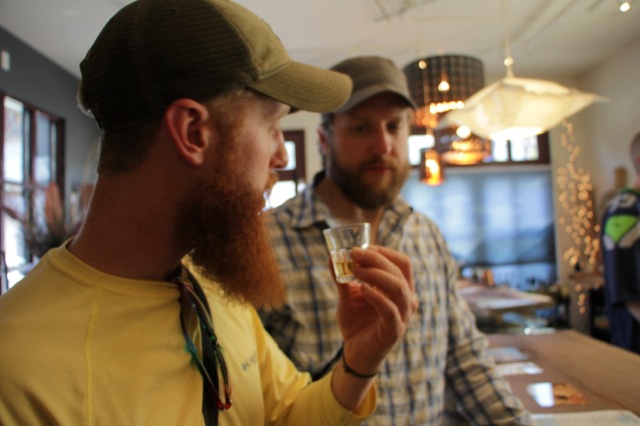 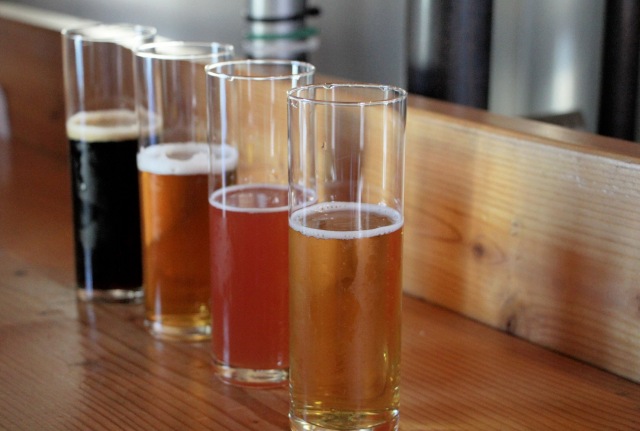