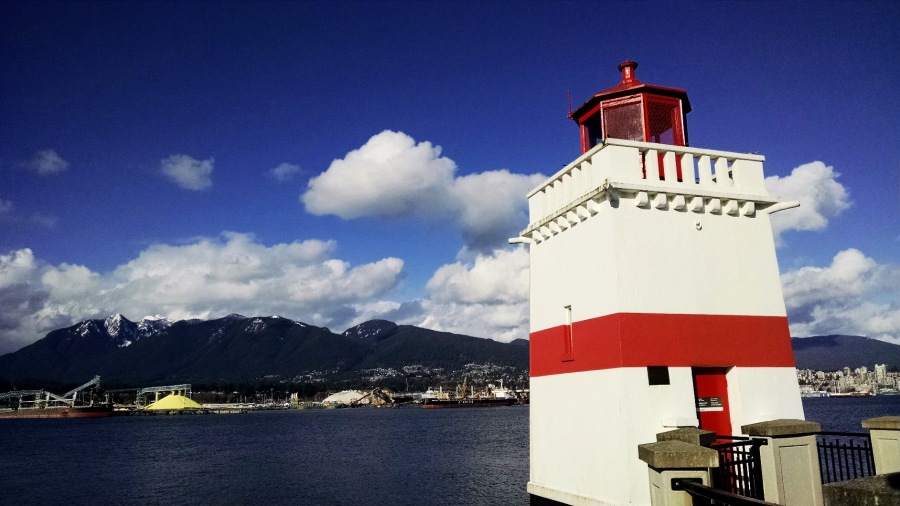 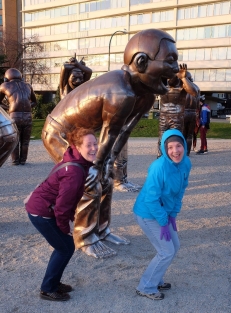 We love Vancouver, British Columbia! We’ve traveled there several times via car and train, exploring different neighborhoods downtown as well as Grouse Mountain, the Capilano Suspension Bridge, the North Shore and more. It doesn’t matter how many times we go–we always discover something new.

For the most part Brian and I have gone together or with family, but we recently had the opportunity to venture north with our friends, Ian and Nicole.

We talked them into meeting us the night before so we could carpool to the Everett train station and take a roundtrip train ride to Vancouver for the weekend.

We took the train to Vancouver once before and loved it– you don’t need a car to see the sights downtown, and you don’t have the stress of crossing the border, waiting in lines or feeling exhausted after a several hour drive.

We set out bright and early Saturday morning to a sky full of gray clouds and a fair amount of rain. Our train was two-tiered– my first time experiencing that in the States– and we had four seats together a few cars away from the dining area.

While we were on the eastern side of the train and viewing fields rather than the Sound, it was an easy ride north, across the border and into Vancouver.

We were able to move through border control rather quickly, and before we knew it, we were on the Aquabus, heading to Hornby Street so we could check into our rooms at the Best Western Sands in the West End.

As we hopped on the ferry, everyone put on their sunglasses– the blue sky and sunshine were a welcome sight after our winter in Seattle and a welcome sign that we were in Vancouver!

Luckily one of our rooms was ready so we were able to drop off some of our backpacks and freshen up so we could set off on an afternoon of exploring.

It was after 1 p.m. so our first stop was lunch at Cactus Club Cafe on English Bay Beach. I had noted this local restaurant chain on one of our earlier trips and this particular location was perfect and overlooking the water. People were walking along the paths, the sun was shining over the water, and our food was great.

After lunch we set off on the path ourselves, walking along the seawall toward Stanley Park. We had to stop and take a few pictures of the inukshuk that inspired the design of the Olympic Games in Vancouver and loved seeing all of the large ships scattered around the bay.

As we headed north along the seawall we entered Stanley Park, the 400 hectare northwest rainforest and natural historical site of Canada.

We spent a little time driving around Stanley Park with Brian’s parents when they came to visit, completing the full perimeter loop via car. But we hadn’t walked the trails before or visited any of the sites not immediately along the road where you can park and get out and explore.

It was a little warmer once we moved inland and away from the fairly significant breeze coming off the bay. We walked along the Lost Lagoon, making our way across the park and over to the Vancouver Harbor side of the park.

We continued to the Seawall with stops to see the totem poles, the 9 O’Clock Gun, which has boomed out the time every day for the past 100 years, and the 1914 Brockton Point Lighthouse. It was late afternoon when we reached the lighthouse so we headed back toward the West End, completing our five-mile walk. 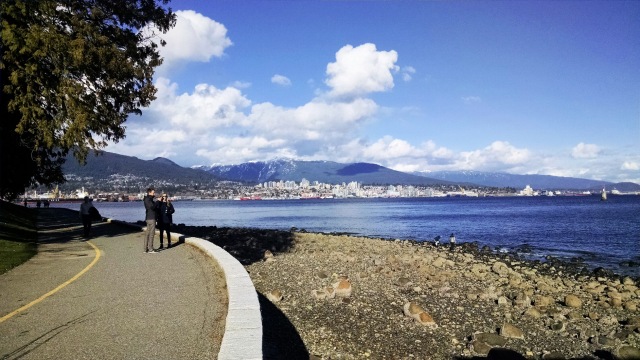 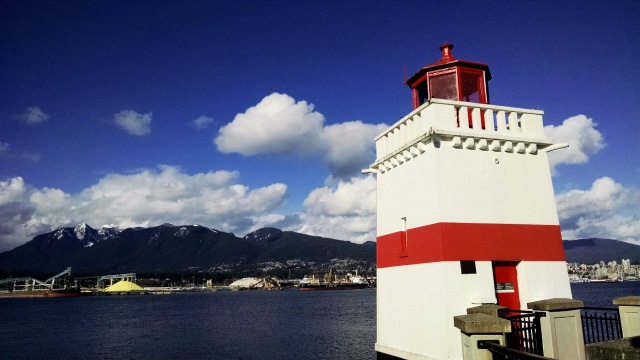 We took some time to rest in our hotel, looking up nearby ideas for dinner and propping up our feet. After we had a little time to relax, we headed just outside our hotel to see the sunset at English Bay Beach.

Our timing was perfect–everything was bathed in soft light and there were quite a few people with the same idea lining the beach and grabbing seats on the driftwood scattered across the sand.

While we waited, we explored the A-maze-ing Laughter sculptures, considered purchasing hot dogs from a local vendor with a line of people waiting for his wares, noticed some interesting bike racks, and were surprised by a tree growing out of the top of a nearby building! It was getting chilly, but the sun quickly sank into the water, and we were soon on our way. 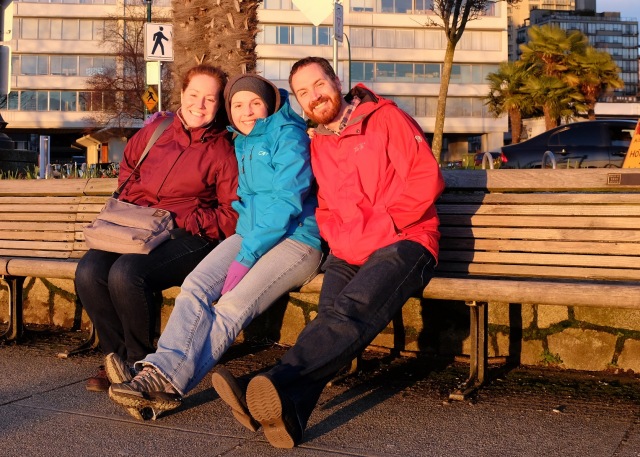 It was a busy afternoon and we had done quite a bit of walking so we decided to stay nearby for dinner. Brian had been dreaming of the jalapeno margaritas at Lolita’s Cantina, a place we had discovered during our last trip to Vancouver thanks to a tip from a couple we met during our Gastown crawl.

That was our first stop of the evening, and not only did we grab drinks, we had delicious pico de gallo and chips as well as several of their various ‘gourmet’ corn tacos. So. freaking. yummy!

After dinner we walked back to the Shamrock Alley, an Irish pub next to our hotel that had live music. I severely underestimated how crazy the crowd would be in an Irish pub the day after St. Patty’s Day! Thankfully we were in a corner booth and able to enjoy ourselves for a little while, but after a bit it was too much for all of us.

Nicole and I headed to bed while the guys had a nightcap at the Three Brits Public House across the street. It was a great ending to our day in Stanley Park and Vancouver’s West End. 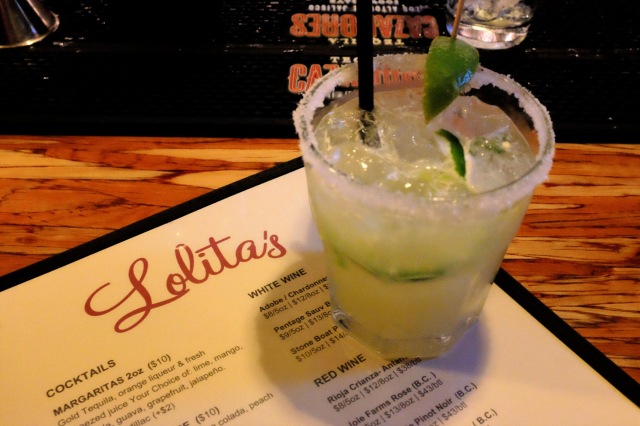 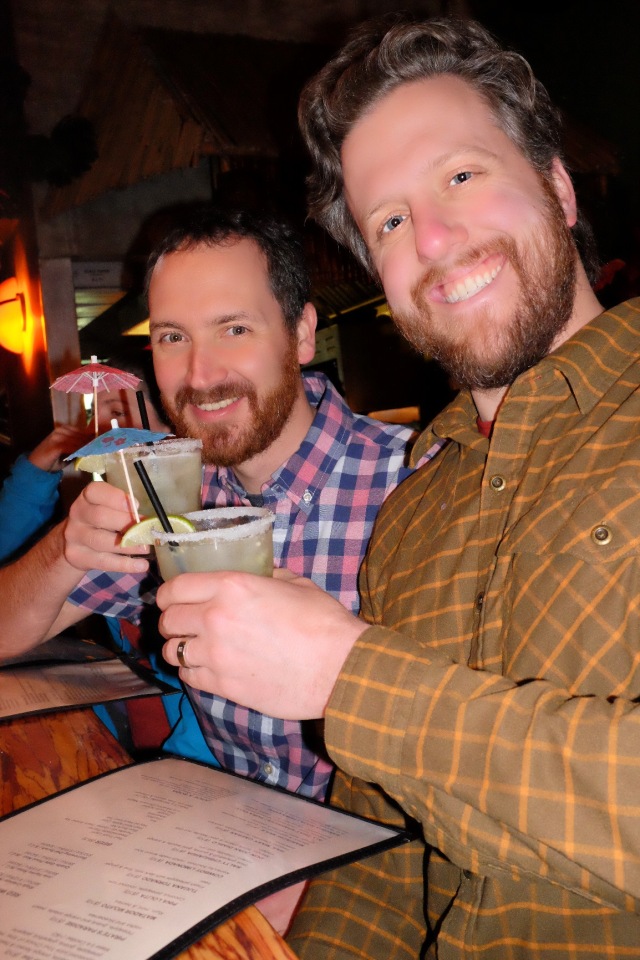 5 thoughts on “Vancouver: Stanley Park and the West End”