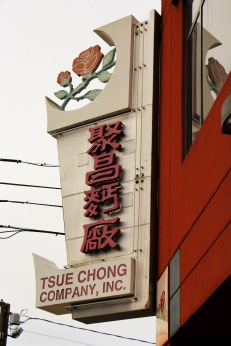 One of my 2017 resolutions is to do a better job exploring Seattle’s various neighborhoods. We committed to local adventures in and around Cleveland before we moved and loved learning about places and things that were right under our noses but that we just never seemed to get around to exploring.

I wanted to apply the same philosophy to Seattle– we don’t know where life might take us, so why not make the most of the time we have here to learn and experience as much as possible.

While we’ve seen many sites throughout the Greater Seattle Area over the past year and a half, it’s not been terribly intentional. Typically we find a festival or event, or our friends invite us to do something, and the next thing we know we’re in Capitol Hall or Fremont taking part in that activity but missing out on everything else there is to see and do in that area.

This year, we’re picking a neighborhood each month and committing at least one day to exploring that neighborhood. Great idea until Friday night when I was facing our last weekend in January without anything planned!

While I was scrambling in my mind to come up with somewhere we could go without too much pre-planning, I was telling Brian that my work colleague had brought in fortune cookies from Tsue Chong Company, a family owned and operated business that has been manufacturing various Chinese food products in Seattle for nearly a century, so that we could all have good luck in the new year.

My mind caught up with my story, and I realized I had the perfect solution! We would go to the International District-Chinatown the next day, January 28, which happened to be Lunar New Year— the absolute best time to go and learn more about Asian history!

Saturday morning we slept in, got some things done around the house and then late morning we hit the road. We parked right in the middle of Chinatown and decided our first stop should be lunch. We walked by Tsue Chong and bought some almond-flavored fortune cookies on our way to a Vietnamese restaurant that’s been long on my list, Tamarind Tree. It was busy but we managed to grab seats and shortly thereafter were sharing an incredible array of stuffed squid, lemongrass chicken satay, tamarind quail, and pork steamed rolls. Everything was delicious, but my favorite was the squid! 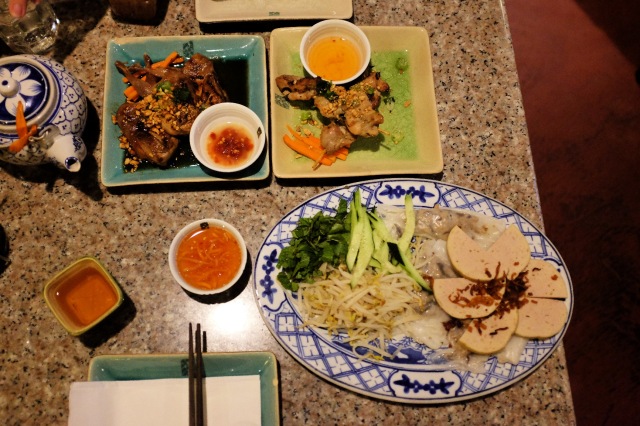 After washing down our meal with some hot tea, we set off walking back toward a couple of places on our list.

We passed multiple stores with all kinds of discounted produce, and I loved taking in all of the artwork and signage.

There were also some neat old buildings that are now home to family associations and organizations that help immigrants acclimate– from finding housing and jobs to securing bank accounts to learning how to get around to local shops, grocery stores and more. Having lived outside the U.S., I can appreciate how difficult it can be to move somewhere entirely new and try to land on your feet. I can’t imagine what that’s like when you are also trying to learn the language and care for your family. It’s wonderful how this community comes together in support. 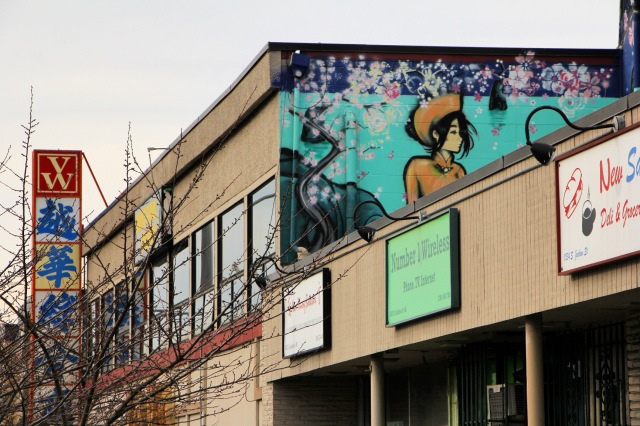 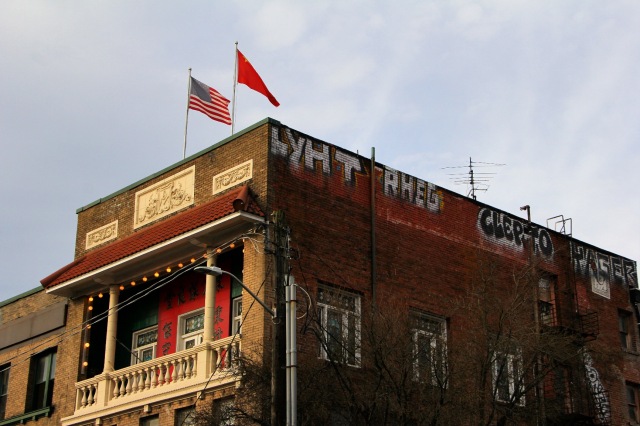 One of the main things I wanted to do was visit the Wing Luke Museum of the Asian Pacific American Experience, which had some activities underway in celebration of Lunar New Year as well as a special exhibit on Bruce Lee, who lived in Seattle during his high school and college years.

We bought our tickets and the girl mentioned that a tour of the historic hotel next door was about to begin. The museum offers a variety of tours, some of which are included in the purchase of your museum ticket, and this was one of them!

We got our bearings inside and then headed out to the sidewalk to wait on our tour guide and a few other people who joined our tour group. Our first stop was a 1910 shop that sold import goods and tickets to the Blue Funnel Line steamship. The shop was relocated to be by the museum but carried forward all of the original cabinets, windows, items and more.

After walking around the general store and taking a few moments to watch a video about the original shop owners and how the store played a role in the community through the years, we headed back outside and entered a doorway immediately to our left which led us up to the historic hotel.

The hotel was one of the first places in the community built entirely by the Chinese with Chinese money. Despite being privately owned, we learned that persecution of Asian immigrants at the time (late 1880s) meant that local police could and would enter homes and businesses at any time. Nothing was entirely private, and everyone was constantly under some level of surveillance or the victim of anti-Chinese laws.

In response, immigrants formed family associations so people could feel like they had support and community. This hotel was home to a Chinese American family association and the museum and community have helped support its restoration. While many items have been placed on display throughout the rooms we were able to tour, it does have its original tin ceilings and mahjong games. 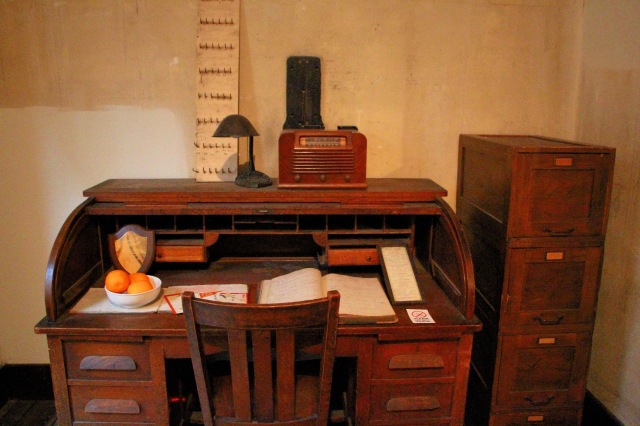 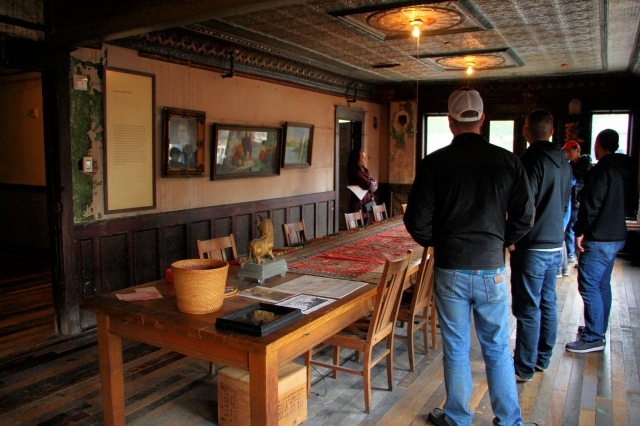 Our tour lasted about 45 minutes and ended back at the museum. On the first floor there were history and art exhibits, and while the modern art displays were a little lost on us, we loved the history component.

It became clear to us very quickly that we know basically nothing about Asian immigration to the United States. The exhibits covered which countries had people immigrating at what times and for what reasons, and it was absolutely fascinating.

Aside from learning about the ancient dynasties, I don’t remember learning anything about any part of Asia during school. It was embarrassing that the only exhibit featuring information I knew something about was on the Japanese internment camps during WWII. In addition to appreciating the general history lesson, it was eye opening to read the stories about individual people and where and how they settled in Seattle and along the West Coast. We spent hours reading the placards and watching some of the films. 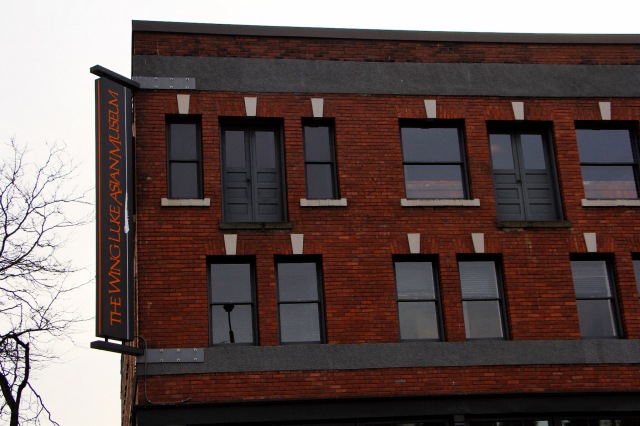 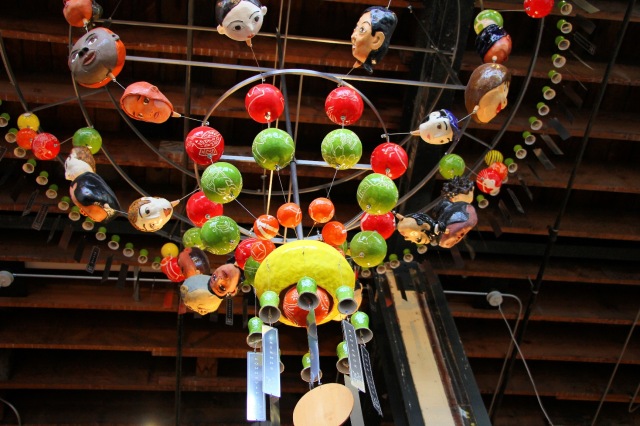 After we had absorbed as much information as possible, we walked outside to Hing Hay Park, which was designed and constructed in Taiwan and is currently undergoing renovation. There was a Lunar New Year celebration planned in the park the next day, but given the construction we weren’t sure exactly how it would be set up. I think we were right to visit on the actual New Year– it was busy, but we could still comfortably make our way around.

As you continue north along the park you come toward the central transit station, and there are some really neat gates, dragon statues and murals that make it clear you’re entering Chinatown.

Along the sidewalk were remnants of the celebrations that had happened earlier in the day– confetti on the streets, oranges (which symbolize good luck) and flowers. 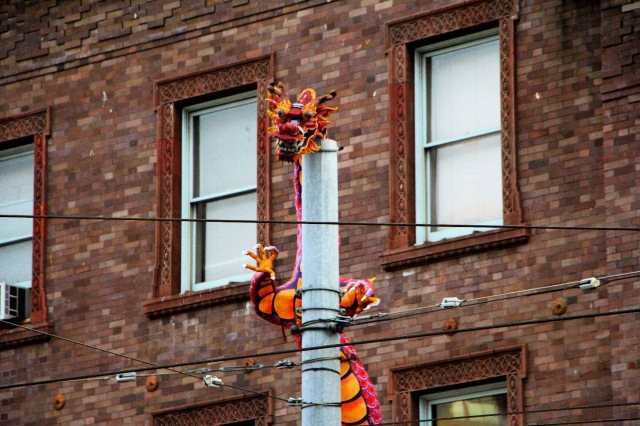 A final stop on my list was Uwajimaya, an Asian grocery and gifts store that’s been operating at several locations in Seattle since the 1920s.

It was packed and while I didn’t initially think we needed to buy anything, our mindset changed when we walked by the seafood counters. There were pounds upon pounds of delicious seafood on display of every variety. We especially enjoyed the steamed tako (octopus), which were perfectly packaged with sucker cups on display!

We simply couldn’t pass up the fresh oysters and bought a half-dozen Willapa Bay (which were pretty good) and a half-dozen Myogis (which were delicious!). We also grabbed a couple of packs of different kinds of smoked fish to try– a black cod (which I preferred) and a halibut (which Brian preferred). 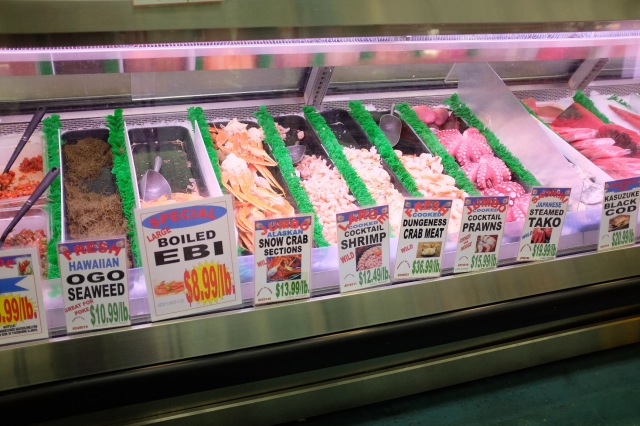 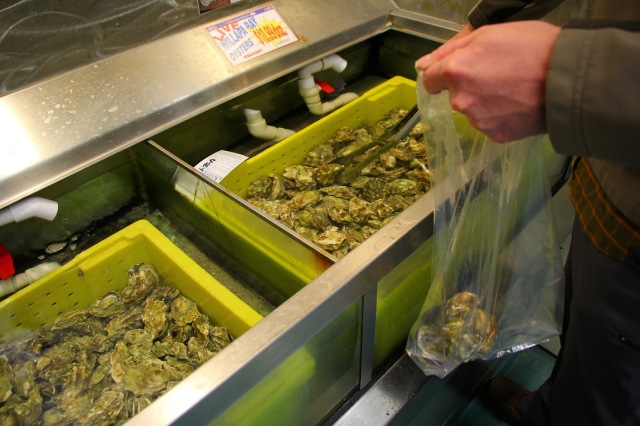 We had everything we needed and were ready to wrap up our time in the International District. As we were waiting in line to check out, we noticed a Japanese bakery called Beard Papa’s. The bakery gets its name from a Japanese tale about a small bakery in Osaka, Japan where people would come from all around to enjoy the pastries of the head baker who was known for his fluffy, white beard. The notoriety of his beard inspired him to concoct a similarly light and fluffy pastry called a double layered puff. The puff featured choux on the inside and pie crust on the outside, and was filled with a perfect mixture of whipped cream and vanilla custard cream.

We simply had to try a Japanese cream puff so we ordered one with the traditional vanilla custard/whipped cream filling, and watched as they stuffed the puff onto the nozzle, pumped it full of cream, and then packaged it to go. It was AMAZING!!

I’m so glad we were able to accomplish our first neighborhood adventure, and I’m so happy we happened to explore the International District on Lunar New Year. We had an incredible time, learned so much, and ate delicious food. We were certainly be back! 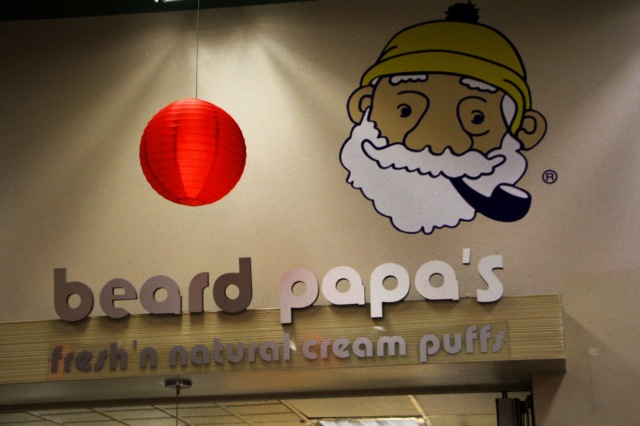