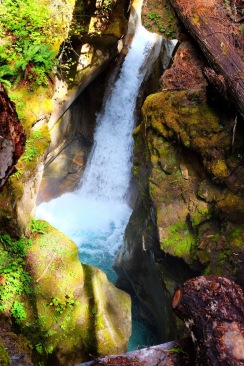 When I originally planned our Labor Day weekend getaway, I based our itinerary on what I thought we could accomplish on the bikes. Unfortunately the weather didn’t cooperate so we ended up driving my Vue over the Cascade Pass to Winthrop, still making most of the stops I had researched along the way.

One stop that was particularly interesting was Newhalem, which is a company owned community that was created in the 1920s to house Seattle City Light employees who were working on the Skagit River Hydroelectric Project.

Despite knowing generally where it was, we drove by it on accident and had to turn around. We found parking in a small driveway just passed the general store and decided to start our visit by stretching our legs and hiking the Trail of the Cedars.

The trailhead began at a footbridge just behind the general store that took us across the river to a one-mile loop trail into the forest. The trail only recently reopened after the area suffered damages during the fall 2015 forest fires. There are still charred remains of many of the trees along the trail.

The path is marked with small signs that point out different species of trees and other plants, and some provide a little background about why the trail was put in place.

We passed a family of four with a guide, but otherwise we were the only people in the woods. Although Brian prefers destination hikes where you eventually come to some item of note, like a waterfall, there was no destination on this trail—it was simply a peaceful and very easy hike around the woods and back to the river.

Given we’d been in the car a while getting there and would be again heading over to Winthrop, we appreciated the opportunity to take a break and stretch our legs. 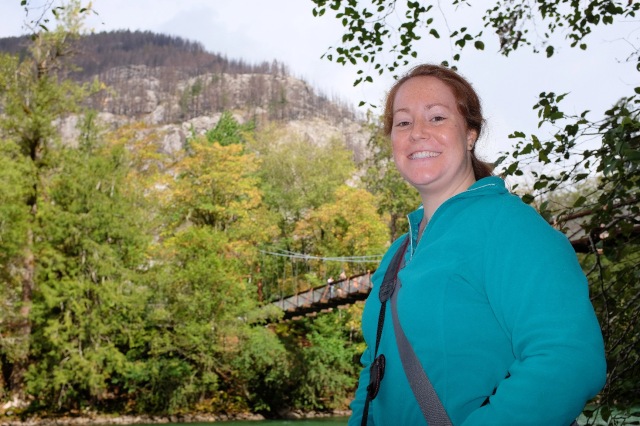 After our short hike, we walked back through the bunkhouses and compound to the Skagit General Store, which opened in 1922 for the city light workers building the Gorge Powerhouse.

I didn’t find the store terribly impressive—it was a neat old building but the items for sale were nothing more than you would find in a small gas station. We did snag some mini bags of oddly flavored chips (I can’t remember them both, but I think one was cheddar horseradish) as a mid-day snack that were pretty good!

Across the street from the store was a giant impeller from a water turbine that caught Brian’s interest. Just beyond and through a small walkway were a few other statues and some green space. I stopped to admire a statue of some jumping fish while Brian walked out to a neat pagoda featuring old insulators from the powerhouse.

Out by the road was the engine to Old Number Six, an old steam engine that used to be the only means for people to travel between Newhalem and Rockport during the construction of the three dams.

There were dozens of kids climbing all over it so we only stopped to see it for a moment before walking back through the old buildings to our car. 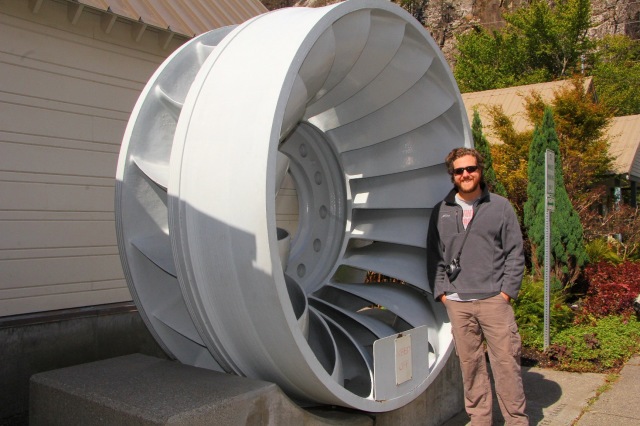 It was a short drive down a small road to the Gorge Powerhouse. There were a few spots to park along the water so we found a place and walked down to a cable bridge over the river with some awesome views of the powerhouse with the mountains in the background. We even saw a few giant fish swimming in the clear water below!

On the other side of the bridge we followed a trail to Ladder Creek Falls trailhead. This short hike has a small side trail to a little bridge over a stream and features a well-marked trail and some poured steps at the end as you approach the small falls. The falls are a bit hidden by the twisting of the hillside and the overgrowth—they weren’t what I would call spectacular, but the hike is so easy and pretty it’s well worth doing.

What was more interesting to me than the falls themselves was the story behind the light and music display that brings the falls to life at night. In the 1920s, J.D. Ross, who oversaw much of the hydroelectric project, designed a colored lighting system for the falls and surrounding woods and trail. He thought the woods and falls could become magical at night and created an otherworldly experience though his application of light.

There were several plaques along the trail that provided background as well as a few pictures from his story. People would drive from all over Washington to experience the falls at night, having dinner at a nearby restaurant and then walking through the gardens and forest admiring the lights and piped in music. The remnants of his early work is still visible in the old posts and lights that occasionally line the trail, and a few years ago the company reinstated the experience with updated equipment so visitors can experience his original design still today.

We returned from the woods and made our way to the powerhouse where there were some signs indicating you could go inside. It wasn’t well marked and we didn’t see anyone else around, but we thought we would check it out. There was a short paved walkway up to a second floor entrance with some hanging baskets, and I got a quick shot of a pretty hummingbird that was making its way among the bright flowers! 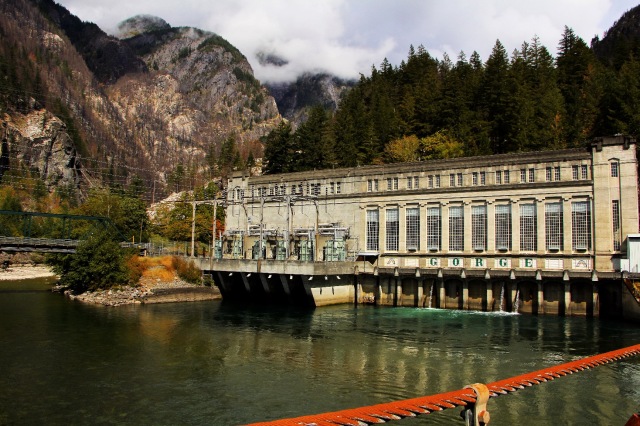 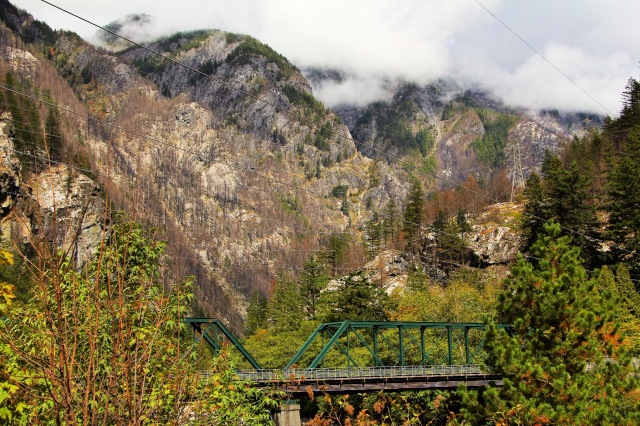 Inside the powerhouse is a mini museum that tells the story of the dams and the powerhouses along the river. I really enjoyed reading about the project—it’s incredible what they were able to accomplish with the tools and machinery they had at the time. To bring everything to life, the information wall ends at an observatory space overlooking the hydroelectric generators, which are actively at work today.

In addition to the information and pictures outlining the history of the project, there are several neat items from the early workers on display. I especially enjoyed the engineering section, which included a very appropriate explanation of how engineers work. I had to take a picture of my engineer there before we headed back to the car!

We probably spent one and a half or two hours at Newhalem between our short hikes and the time we spent in the powerhouse. If you’re looking for something to break up your drive from Marblemount to Winthrop, and have an interest in nature and history, this town has something of interest for the whole family.

In fact, if you’re hiking Mt. Baker or even spending a few days on the west side of the Cascades near Marblemount, I would recommend making the quick drive to learn more about how the dams and powerhouses were created and the structures that are still active and working today. 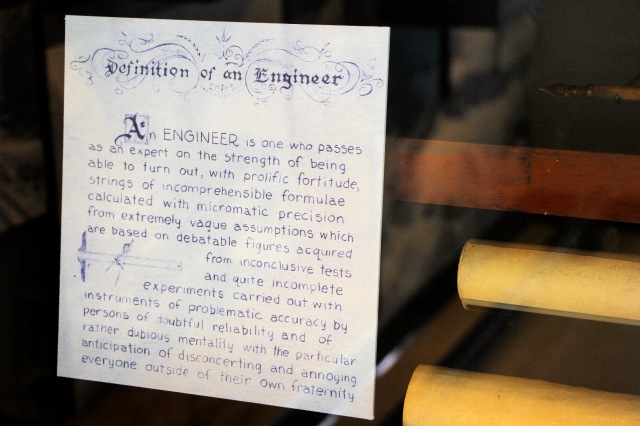 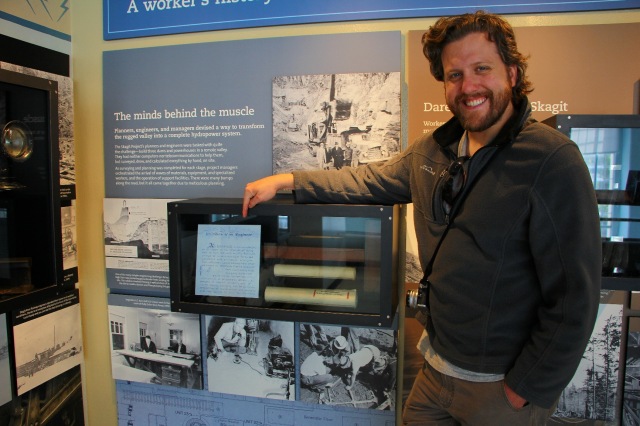 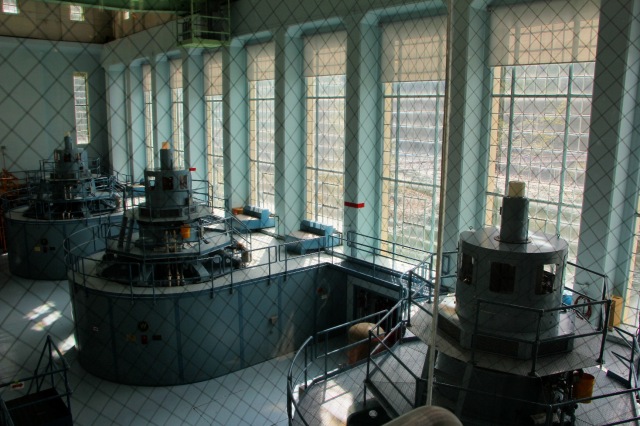 One thought on “Afternoon in Newhalem, Washington”