We had an awesome day exploring the great outdoors north of Vancouver, British Columbia, at both Grouse Mountain and Capilano Suspension Bridge, but no day-trip (for us!) is complete without a little foodie tour!

We were so caught up in our adventures we didn’t have time for lunch so we were more than ready for dinner before our drive back to Everett, Wash.

Places to Eat and Drink in Gastown

We drove through downtown Vancouver to a lively neighborhood called Gastown. The Gastown district is actually one of the city’s historic districts, and I would love to go back when we have a little more time to explore and just take in the architecture and walk along the water and pop in a few shops.

Apparently there is also a famous steam clock that’s one of the most popular tourist spots in the district–we will have to find it next time! We did find the statue of “Gassy,” who the district is named after in a super cool square with lots of people and patios. 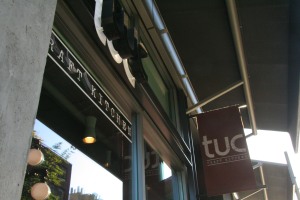 I looked up some Vancouver food blogs ahead of time and jotted down a couple of places we could try, but we only made it to one. From there we took the advice of the friendly bar staff to make our way to a couple other spots off the beaten path. 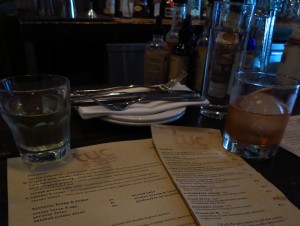 Our first stop was Tuc Craft Kitchen. Since it was the last day of national Negroni Week (my husband’s favorite adult beverage), he took the bartender’s recommendation and tried the rhubarb Negroni. 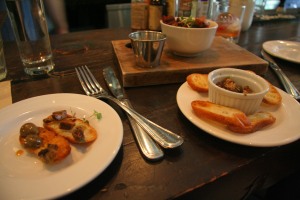 He liked it– I tried it but cannot provide commentary because I’m not a big fan of gin. I stuck with a glass of chenin blanc from the region that was perfectly refreshing after a hot day.

We were the first people to sit at the bar but it quickly filled up and the tables were also packed. We quickly discovered why– the food is AMAZING!

We knew we were going to pop around to a couple of spots so we stuck with a couple apps– the Za’atar Olives & Toast and the Pork Belly Cracklings.

The olives and toast were so simple and delicious– toasty baguettes with a warm olive mix to spoon on top. We were licking the bowl clean!

But I/we could NOT get enough of the pork belly, which was served with a slightly sweet wine reduction sauce. It absolutely melted in your mouth. The best thing I’ve eaten in a while– go to Tuc immediately and try it out. You will not regret it!

I stepped away for a minute once we finished up and decided to move on to our next stop, but when I came back my husband was in conversation with three guys behind the bar who were making a list of other places we needed to go.

I fancy myself the traveler/citizen of the world/lover of people, but my husband can actually make friends with anyone, anywhere. These friends set us off with walking directions to our next stop, Bambudda.

This spot was so fun with an awesome, open, walk-up bar. It just invited you in, and everyone sitting there seemed to be having a good time.

We grabbed a couple open spots along the side of the bar and my husband went for another gin-based cocktail called the Bamboozler. 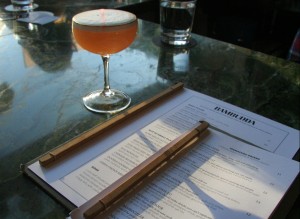 Again, I tasted, but again, I refrain from comment on the taste. He loved this one, and what I loved was the way it looked! Creamy egg whites on top that floated a red sugar stripe. The stripe floated through the whole drink– it was so pretty! 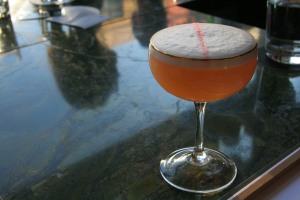 We opted for a single app we could share– the pork and foie gras dumplings. Four dainty dumplings that, thankfully, the waiter told us to scoop out with the spoon. They were hand crafted and just clung together long enough for us to prepare our chopsticks and dig in. I couldn’t even grab a decent picture because we consumed them so quickly!

They were very tasty, but the pork was much heavier than the foie gras. This made them more filling than I had anticipated, but I wished I could have experienced all the flavors.

The bartenders here recommended a couple other places but thought we should really check out Notturno in order to say hi to ‘H,’ the easily fired up (so they claimed!) bartender from Manchester. We wound around a couple of streets and right next to the boisterous Blarney Stone we found the slightly hidden Notturno.

It was pretty quiet inside so we had H’s full attention. Sure enough, there wasn’t a topic we didn’t cover. As DD, I was just along for the ride by this point, but my husband is always ready to share his opinion on any topic so there was quite a heavy conversation while they hashed out Canadian, British and U.S. politics. I was all riled up by the time we left. Thankfully we had a couple of hours to drive home so I could calm down before heading to bed!

Despite hanging out several hours, we only had time for a small taste of Gastown. We will definitely be back, and just so I don’t forget, here are the other restaurants/bars the awesome bloggers and bartenders told us to check out next time around:

If you have other recommendations, I will gladly add them to my list!