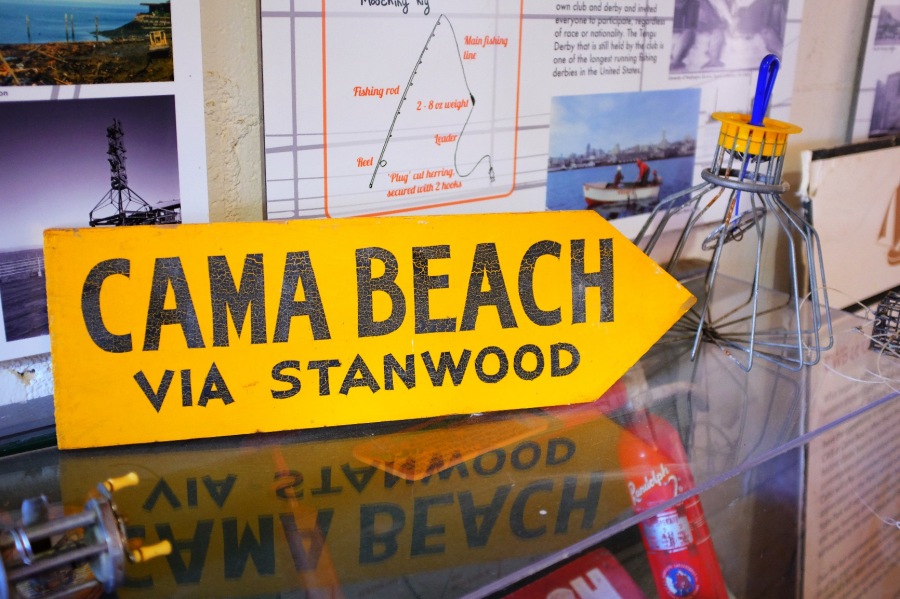 Do you ever wake up on a beautiful spring morning, have some coffee and decide you need to hit the road and spend your Saturday on a nearby island?

Last Saturday, while Brian caught some much needed sleep, I put together a quick list of things to see and do on nearby Camano Island (which I outlined for him as soon as he was vertical). He was a total sport and before I knew it, we were in the car and heading north.

Both Whidbey and Camano Islands are quick trips from our house. While we’ve been to Whidbey Island numerous times on our own as well as with family and friends, somehow we had never made it to Camano Island. The weather was beautiful, and I finally had Brian home for an entire week so it seemed like the time was right for us to finally check it out!

The drive was easy and before I knew it we were pulling over at what appeared to be a small welcome center, equipped with park and art gallery, which served as our introduction to the island.

We parked the car and walked around Freedom Park, visiting the small art center where Brian spoke with the proprietor about things to do on the island. He gave us a map and marked some of his favorite parks and places to eat, which I was pleased to see reflected much of what I had looked up that morning!

Tulips were blooming all over. We stopped to take pictures of the flowers and sculptures as well as some interesting signs. We also relocated the car to a nearby complex complete with coffee roastery, library, shops and places to eat and walked around that space as well.

We took pictures of the unique outdoor signs, purchased some locally made gifts, and tasted and eventually bought some amazing jalapeno pepperoni sticks from Del Fox Custom Meats. 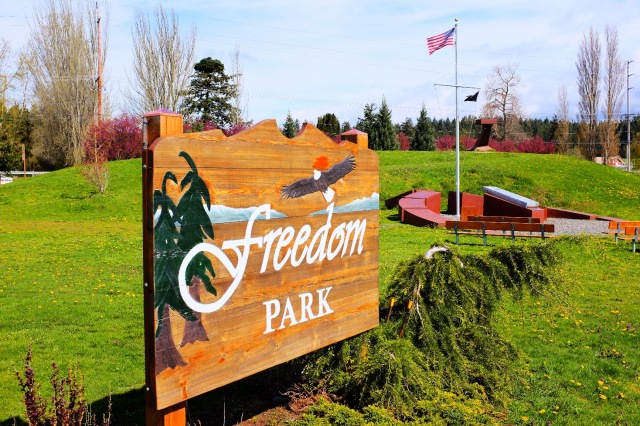 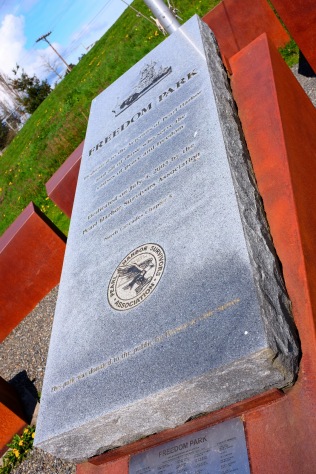 Because our trip was so last minute we’d had a late start. One of our first priorities, arriving mid-day, was to grab lunch.

I read several recommendations for the Rockaway Bar and Grill, which is an unassuming spot along the Camaloch Golf Course on the northern part of the island.

Despite it being lunch hour on a weekend, we were able to get seats in a corner by a neat fireplace covered in plates of metal with exposed grommets.

We shared a tasty bowl of steamed clams and a delicious plate of roasted Brussels sprouts before driving north to our first park of the day, the English Boom Country Park.

There were only a few spots available for cars at the end of the tiny road leading to the English Boom. We parked right next to the trail head and walked across the boardwalk and out toward the beach, stopping to read over the information bulletin board outlining the area’s history.

A couple was standing nearby and pointing up toward the trees. I stopped to look as well and the woman mentioned they had just seen two bald eagles heading in to a nest filled with babies! We stood and stared for quite a while but assumed they were feeding or resting and eventually went on with our exploration of the area.

The sun was out, the sky was blue, and we had a great view over the water toward the Cascade Mountains. There were low clouds on the horizon, but the beach and surrounding area were clear and beautiful.

After our time on the water we hiked the trail through the grass and just inland from the coast. It was warm out and we saw a few birds along the way. There was no one else on the trail so we enjoyed a peaceful walk.

The trail terminated after a while so we turned around and admired the nearby hills as we began to make our way back. About halfway through our return these two gigantic birds came soaring out from the tree line—our eagles! The one circled back to the nest while the other headed out over the water, likely in search of additional food.

We weren’t close enough to photograph them, which reminded us we need to get a new lens for our upcoming trips where we’ll want to get close-up nature shots. Even so, we were able to admire them from afar until it was time to move on to our next stop, Cama Beach State Park.

We drove toward the northwestern part of the island and along the west coast to Cama Beach State Park, which is about halfway down the island.

State parks in Washington require a Discovery Pass, which we usually keep in our vehicles. We actually have multiple passes to cover both our motorcycles and cars– we accumulated several following our move to the area because we kept changing vehicles and the passes have to feature your license plate number.

Despite having mentioned the passes in the morning, I completely forgot to grab them before we left the house. Thankfully we were there on a free day so we didn’t end up needing them!

We parked and walked down a path through the woods and to the water. As we arrived among the old cabins and bunkhouses along the water, it was obvious this place had been there a while.

The website said the camp was a popular family vacation spot from the 1930s-1950s, but when this form of family vacationing grew less popular, so did the park and campsites. There’s since been a revival, and we saw quite a few younger families as we walked around.

After passing through the rows of cabins we came upon the Center for Wooden Boats.

Believe it or not, we saw a wooden boat or two inside, as well as several other types of boats that were under construction. It looked like there were a number of educational activities for kids and adults, and there were also opportunities to rent the boats and equipment if you wanted to head out on the water.

In addition to having tons of boats hanging and lying around inside, the center had a small museum full of pictures and items from the camp’s heyday. 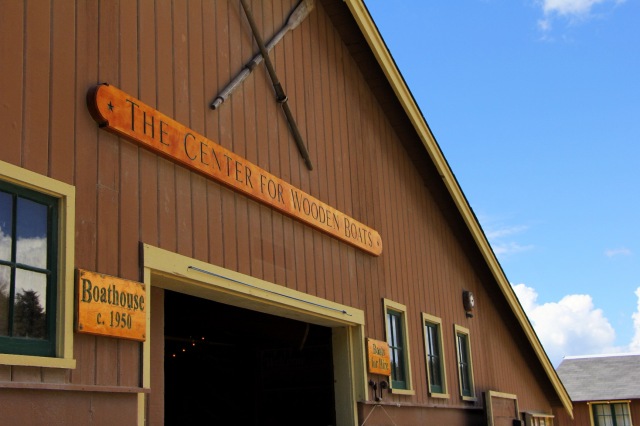 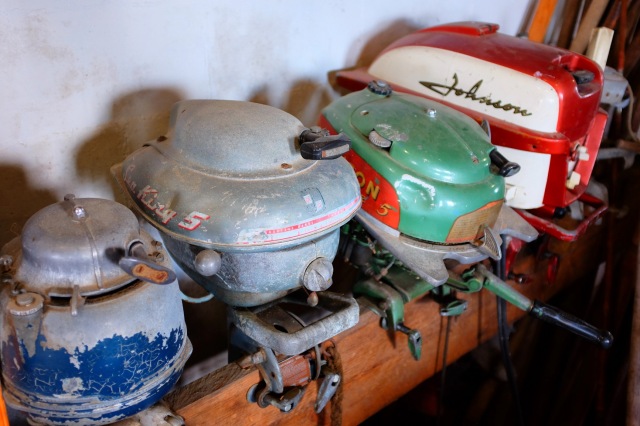 We walked through the center and out onto the beach. Along the way we met a guy who worked there and mentioned the tracks leading to the water.

Back in the day, you could get your boat, have it loaded onto the track, and then have it wheeled down the beach hill and into the water. When you returned, you could have it pulled back up the track and into the building. I had never seen anything like it!

While we were talking to the guy his adorable dog, Enzo, was busy trying to get his dad’s attention. When the guy walked away for a bit, Enzo went crazy, crying and straining to see where his dad had gone!

He was such a big baby–I managed to distract him long enough for a picture, but he wasn’t happy until his dad was back in his sight!

It was hard saying goodbye to Enzo but we were getting a little tired and still had a couple of other stops to make on our island tour. We hiked back up to our car and then drove just a little ways south to Camano Island State Park.

This park was much calmer and had fewer people than Cama Beach State Park. I read there’s a trail between them so you can hike from one to the other, and the park itself has a fair trail system throughout its 224 acres as well.

There weren’t too many people around but there were several empty cars so I imagine people were out in the woods, having gotten an earlier start to their days than us. 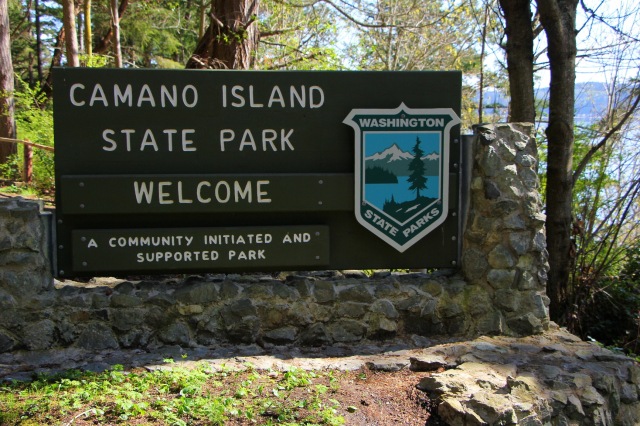 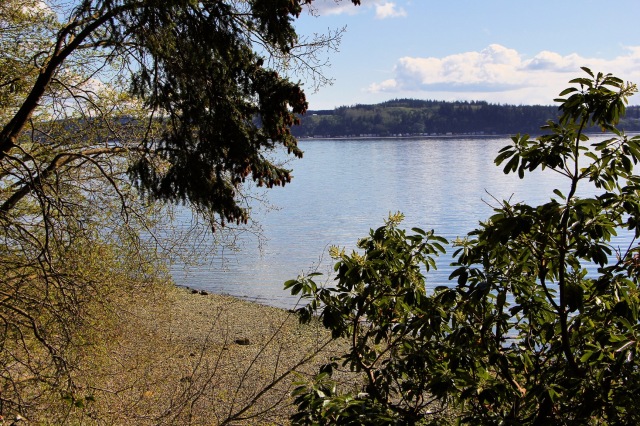 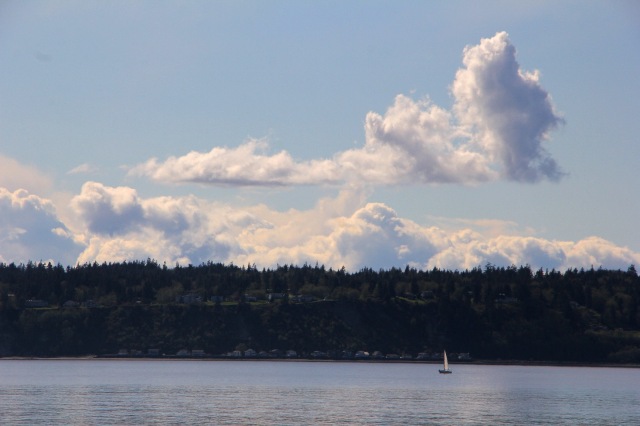 Our last stop of the day was the Iverson Spit Preserve. After leaving Camano Island State Park, we crossed to the east side of the island and drove up along the coast to the preserve.

The parking was at the end of a residential strip of houses along the water. Most appeared to be summer houses, and we couldn’t imagine what it would be like to live there during the summer with tons of people coming and going down that narrow, dead-end road to see the spit!

As it was, we were among a handful checking out the spit that afternoon and had to get a little creative with our own parking situation. The sun was still high but starting to sink toward the west. The light illuminated the water, surrounding vegetation, and the Cascade Mountains, which were peeking through the clouds across the bay.

While smaller than Whidbey Island, with fewer towns and attractions, Camano Island offers plenty to see and do, especially if you want to spend a day outside walking or hiking along the beach or in the wooded parks.

I’m sure we’ll be back again so we can check out the drive around the southern tip, the other places to eat, the Canopy Tours Northwest ziplining adventure, and the other beaches and parks we missed.

If you wake up one beautiful morning looking for something to do, consider a day trip to Camano Island! 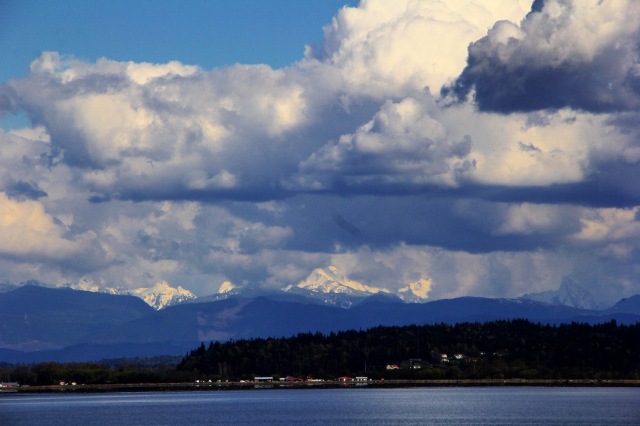 One thought on “Parks and Beaches on Camano Island”